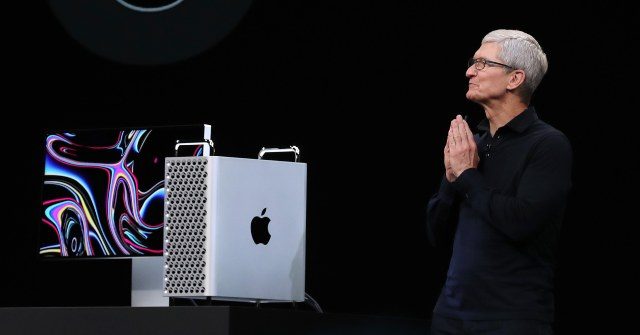 During a recent interview at Apple’s developer conference, CEO Tim Cook stated in an interview that a lack of digital privacy is bad for democracy and insisted that Apple is not a monopoly.

During a recent interview with CBS News at Apple’s Worldwide Developers Conference (WWDC), Apple CEO Tim Cook was asked if he thought the company was too big, to which Cook replied: “No. I don’t think so. I think that with – but with size, I think scrutiny is fair. I think we should be scrutinized. But if you look at our – any kind of measure about is Apple a monopoly or not, I don’t think anybody reasonable is gonna come to the conclusion that Apple’s a monopoly.”

Cook continued: “Our share is much more modest. We don’t have a dominant position in any market … You know, our share of smartphones in the U.S. is typically in the high 30s or so, mid-30s. On PCs, it’s lower than that. And so on and so forth and so —” Cook stated once again: “We are not a monopoly.”

Apple shares fell at the beginning of the week on the news that the DOJ is considering an antitrust investigation of the company. As Breitbart News reported Monday:

The investigation into Apple is reportedly linked to the broader probe of Google, according to Reuters, and is a result of a meeting between the DOJ and the FTC. CNBC states in its article: “The headlines together paint a daunting picture for Silicon Valley and the stock market’s most valuable companies. Big tech has long faced scrutiny from European regulators, but has so far shrugged off calls for government regulation in the U.S.”

Cook also stated that he strongly disagrees with Sen. Elizabeth Warren’s (D-MA) suggestion that big tech companies should be broken up, stating: “Well, I strongly disagree with that. I think some people would argue, if you are selling a good, then you can’t have a product that competes with that good. And I think that’s part of what is being argued there. But that’s an argument, Norah, that takes you down the path that, Walmart shouldn’t be stocking alternative or house brand … And so this is decades of U.S. law here. But I think scrutiny is good, and we’ll be – we’ll tell our story to anybody that we need to or that wants to hear it. ”

Watch more of the interview with CBS News here.