State Sen. Burt Jones (R-Jackson) called for an investigation into the Gwinnett County School Board on Wednesday after the board elected a new chair who has a trove of inflammatory and racially charged social media posts.

Jones asked the State Board of Education to launch a probe into school board chair Tarece Johnson’s “statements, implemented policies, and administrative actions” as her collection of posts on TikTok come under growing scrutiny for their extremist nature.

“Now more than ever, our education system needs welcoming role models who can provide guidance and assurance to students of all backgrounds, and Dr. Johnson’s actions severely undermine that mission and further divide our students and schools,” Jones wrote in a letter on Wednesday to the Georgia Department of Education.

Gwinnett is the second-most populous county in Georgia, situated in Metro Atlanta’s northeast region, and is home to nearly one million people. Its school system is the largest in Georgia.

Johnson, an outspoken Black Lives Matter advocate, was elected as chair of the Gwinnett school board in January after running unopposed for the position. She had previously served on the board since January 2021.

In another post, she is pictured aggressively waving a Black Lives Matter flag while dancing and lip-syncing chants in various costumes, including a vampire costume:

Praying for all the children in @GwinnettSchools. This is their new chair. I wish I was joking pic.twitter.com/wt5fLebEjF

Johnson, on her now-private Twitter account, also wrote in June 2021, “as reflected in the Georgia State Board of Education’s CRT resolution, Georgia is a racist State where white fragility, privilege, and power reign supreme. This is past and present.” 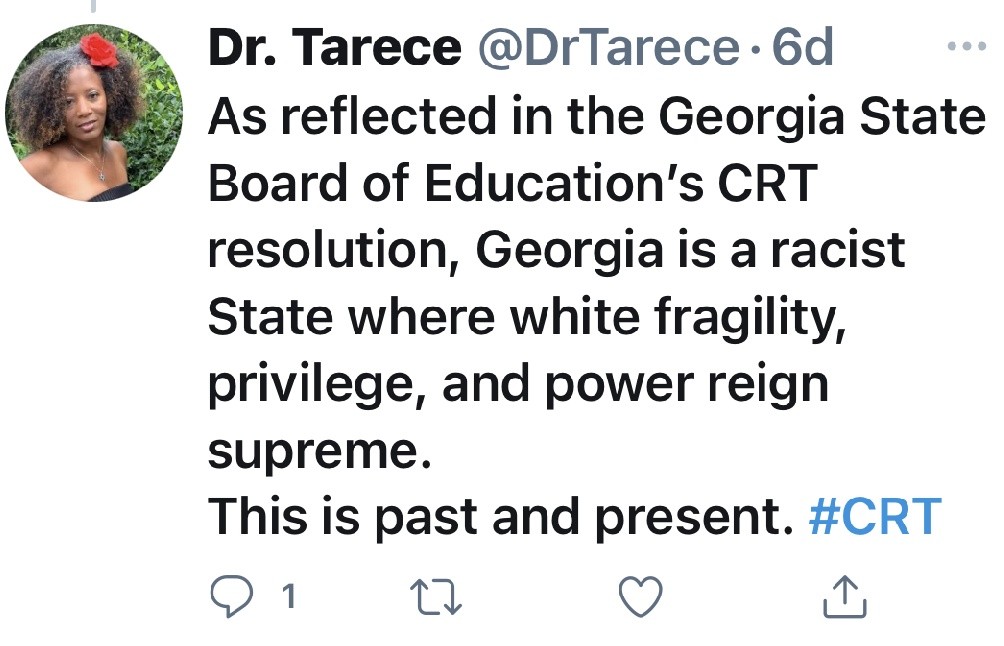 Likewise, in a 2020 Facebook post, Johnson said, “the original purpose of Police was to capture runaway slaves seeking freedom. It has evolved to incarcerate people for profit, terrorize, and even kill black people.” 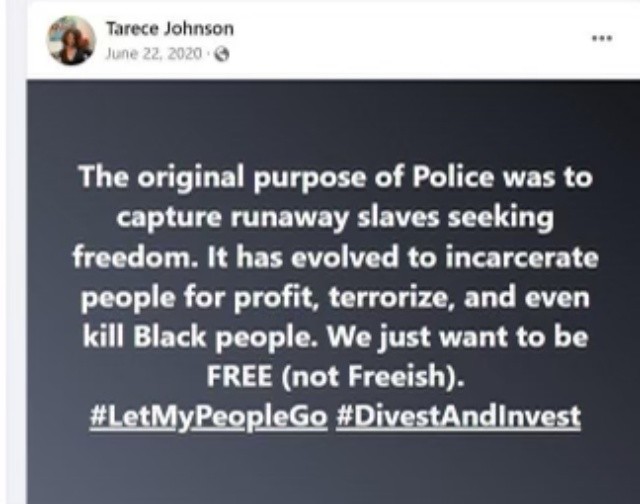 Brenda Stewart, one of two Gwinnett mothers who were arrested at a school board meeting in November, told Breitbart News that “many parents call her TikTokTarece” and that Johnson “is obsessed with race, social justice and equity.”

Jones called her social media posts “hurtful and egregious,” adding that “they only serve to further divide our country and our classrooms.”

Influential conservative think tank Heritage Action noted a book by Johnson in which she wrote, “Implicit in effective multicultural learning, especially with consideration of racial diversity and equity in education, is critical race theory.”

Jones also highlighted this matter in his letter, writing, “The notion that the largest school district in our state would be surreptitiously injecting such divisive curriculum into our children’s classrooms — and then attempting to cover it up — is both egregious and completely unacceptable.”

The Republican state senator asked the state education board to “evaluate all potential options within its authority” to address Johnson’s extensive history of race-based commentary, as well as the GCPS curriculum concerns.