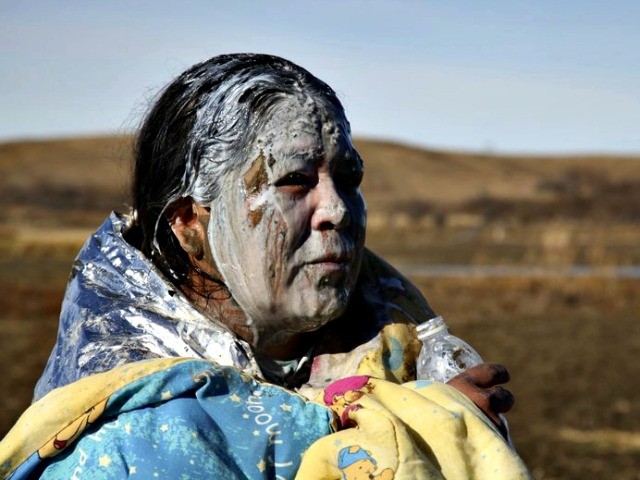 Breitbart News first reported in 2012 that Sen. Elizabeth Warren’s (D-MA) great-great-great grandfather Jonathan Crawford was a member of the Tennessee Militia that rounded up Cherokees living there at the time for the Trail of Tears journey to Oklahoma in the 1830s.

In the more than 30 years since she first claimed Native American ancestry, Warren has failed to produce a single piece of credible historical documentary evidence to support that claim. The release of Bustamante’s report on Monday was the first time she presented what she purports to be genetic evidence to support the claim.

The evidence establishing Warren’s direct descent from Crawford, a member of the Tennessee Militia that rounded up Cherokees living in Tennessee in the 1830s, is well documented.

Here are the five generations between Elizabeth Warren and Jonathan Houston Crawford, as documented by Cherokee genealogist Twila Barnes at her website, Polly’s Granddaughter, which is summarized here:

A 1907 newspaper article described John H. Crawford as a “white man” who shot at an Indian.

Preston H Crawford:born 1824 in Tennessee; died 1875 in Laclede County, Missouri, was the child of Jonathan H. Crawford and O.C. Sarah Smith. He married Edith May Marsh.

They had 8 children, including Preston J. born about 1824, and William J. Crawford born about 1838, who married Mary Longworth in Oklahoma in 1894.

The evidence establishing Crawford as a member of the Tennessee Militia in 1835 and 1836 is also well documented, as Breitbart News first reported in 2012:

These were the troops responsible for removing Cherokee families from homes they had lived in for generations in the three states that the Cherokee Nations had considered their homelands for centuries: Georgia, North Carolina, and Tennessee.

While these involuntary home removals were not characterized by widespread violence, the newly displaced Cherokee mothers, fathers, and children found an oppressive and sometimes brutal welcome when they finally arrived at the hastily constructed containment areas. An estimated 4,000 Cherokees were warehoused in Ross’s Landing stockades for months awaiting supplies and additional armed guards the Federal Government believed necessary to relocate them on foot to Oklahoma.

Jonathan Crawford most likely did not join the regular Army troops who “escorted” these Cherokees along the Trail of Tears. He did, however, serve once more with Major William Lauderdale’s re-formed Batallion of Tennessee Mounted Infantry Volunteer Militia. This group fought the Seminole Indians in Florida during the Second Seminole War. Crawford arrived in Florida in November, 1837, and served there for six months until his unit was disbanded in Baton Rouge, Louisiana the following May. (Note: It was not uncommon in those days for militia formed to serve for a limited period of time under specific commanders would reform later under the same commanders.)

Jonathan Crawford’s service as a Private in Captain Richard E. Waterhouse’s Company of Major William Lauderdale’s Battalion of Mounted Infantry in Brigadier General R. G. Dunlap’s East Tennessee Mounted Infantry Volunteers is confirmed by his appearance in the muster roll of the Brigade, taken around June of 1836. (Note that this transcription of the muster roll incorrectly lists the date as 1832.)

His service a year later (1837) in Major William Lauderdale’s Tennessee Volunteer Mounted Infantry (Five companies of volunteers, one of which was led by Captain Richard E. Waterhouse) is confirmed by his widow O.C. Sarah Smith Crawford’s 1851 pension application before the Bledsoe County, Tennessee commissioners

The evidence that Crawford’s unit helped round up the Cherokee in 1836 is also well documented.

“President Jackson officially proclaimed the Cherokee Removal Treaty, also in 1836. Gen. R. G. Dunlap and his troops policed the Cherokees in Tennessee, North Carolina and Georgia as they were moved west. There was no uprising,” according to a brief biography of Dunlap, written by his descendant, Kenneth Dunlap, in 2003.

Dunlap’s command role in the removal of Cherokees from Tennessee was documented in the “Report from the Secretary of War in Compliance with a resolution of the Senate of the 13th October, 1837, in relation to the Cherokee treaty of 1835”, which was “Laid on the table [of the United States Senate on] January 15, 1838.”

Brigadier General Dunlap will forthwith select from his brigade of volunteers, two regiments, of ten companies each, including tow companies of infantry for active service, subject to the approval of the Commanding Gneral, to serve twelve months, unless sooner discharged.

The remaining regiments and companies will be ordered to their homes, to wait the further orders of the President of the United States and Commanding General of the army of East Tennessee and the Cherokee nation.

On December 21, 1836, a John Crawford was one of 29 members of the Tennessee Militia “residing in the Athens [Tennessee] area” who signed a letter, seen on page 755 of that 1838 report to the United States Senate, stating that “we consider said George W. Currey eminently qualified to be the successor, as superintendent, for the removal of Cherokee Indians.”