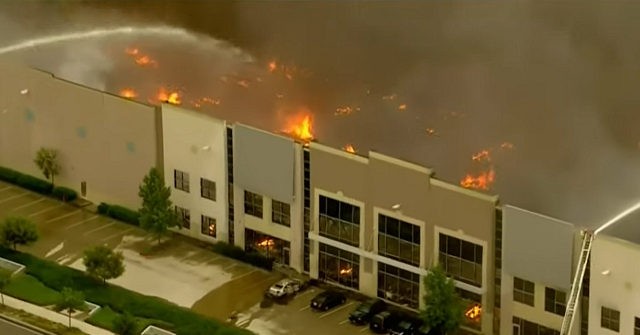 First reported at 5:30 a.m., the conflagration burned through the structure with flames rising hundreds of feet into the air. An adjacent freeway was temporarily closed as the San Bernardino County Fire Department responded. Several Amazon shipping trucks were also destroyed.

“I looked down the aisle, and I seen flames,” one employee recalled in an interview with CBSLA. “First thing I did was just yell out, ‘fire, fire.’” Another employee remembered the sudden pandemonium. “All I could hear was my supervisors yelling ‘fire’ and ‘get out of the building as fast as you can,’ and I just seen people scattering.”

In a statement to CBSLA, Amazon confirmed that there were no reported injuries from the Kuehne and Nagel operated warehouse, and they expect only a “minimal” impact on customer orders. “We are glad everyone is safe, and thankful for the efforts of the local firefighters and first responders,” the company said. “This site was operated by a third party and we will support them throughout this process.”

As of yet, the cause of the fire remains unknown.