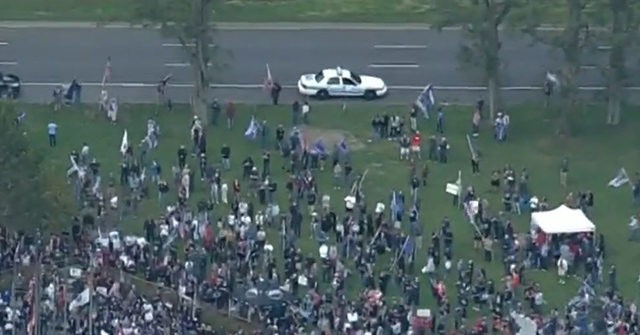 Thousands of police officers, union members, and supporters attended a “Back the Blue” rally in Long Island, New York, on Sunday.

More than 1,000 people took part in the demonstration to support the police in Suffolk County’s town of Hauppauge, CBS New York reported.

“We’re taking the blame for bad policies and bad decisions made by our elected officials. But they don’t have the courage to stand up and say we made a mistake. Instead, they’ll say ‘Hey, a diversionary tactic — blame the cops,’” Police Benevolent Association President Patrick Lynch said.

This is at least the fourth “Back the Blue” rally held in Long Island in recent months.

In September over Labor Day weekend, hundreds turned out for a Back the Blue rally in Southampton, New York— also on Long Island.

Back the Blue rallies have become a popular way to support law enforcement across the country.

In August, the towns of Wilbraham and Hampden, Massachusetts, saw a record turnout at a mobile rally that took place between the two cities.

Similar rallies supporting the police were also held in Johnson City, Tennessee, and Washington state over Labor Day weekend, where hundreds of people were in attendance.

“Back the Blue” events are part of an Act for America grassroots campaign that helps local communities organize events to support their local law enforcement agencies.