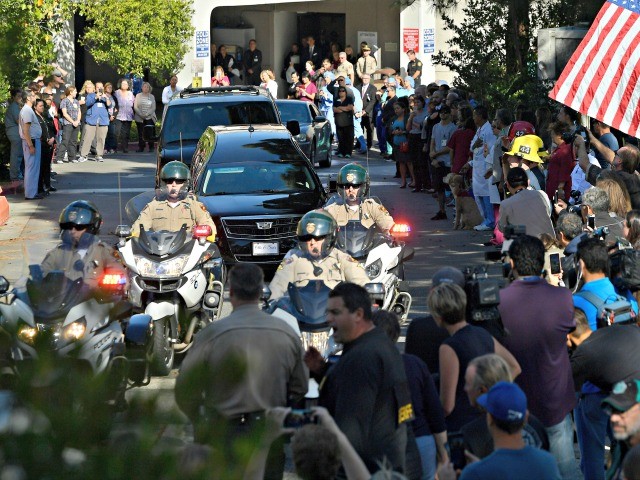 Wednesday night’s mass shooting at a bar in Thousand Oaks, CA, included episodes of Americans risking their safety to assist and protect others.

Teylor Whitter, who was celebrating a friend’s birthday at the bar prior to the attack recalled one such example of courage. She and others had fallen to the ground as the bar’s patrons rushed to escape. Several men surrounded her and others with their bodies to protect those who had stumbled.

A bunch of people dog-piled on top of each other. Everyone just yelled, ‘Run, he’s coming!’ There were at least 50 people that all tried getting up at once and running out the back door. I ended up getting caught in the ground and stumbled over by multiple people I got hit in the head by a stool that was being picked up to throw through a window, until some guy came up behind me and grabbed me and said, ‘Get up, we have to go!’

She said multiple men around her blocked the group with their bodies, “ready to take a bullet for every single one of us.”

The bar was packed when police responded to the country western bar in Thousand Oaks, about 40 miles west of Los Angeles, late Wednesday night.

A parent of one of the bar’s patrons said off-duty police officers “stood in front of my daughter” to protect her after the shooting began.

A witness named Matt told ABC’s local affiliate that he helped others at risk to himself out of “instinct.”

“All I did was grab as many people as I could and pulled them underneath the table and then I heard a break in the shots and we got people out of there as much as we could,” said Matt — wearing a blood-stained shirt — recalling his breaking of glass windows with a barstool to assist people with escape. Matt continue:

That’s all we could do. The only thing I could have wished for was to have something better than a barstool. We probably pushed 30 or 35 people through that window. I know where I’m going if I die. So, I was not worried to sacrifice. All I wanted to do was get as many people out of there as possible. … We ran back in and we were just pulling stragglers who were still in the parking lot. We were like, ‘You need to get out of here right now.

Matt recalled seeing patrons assist the wounded, “When we were going back to grab more people, someone was being pulled out with a chest wound and the guys carrying him were tired, and so we took over and carried him to the paramedics. That’s the only person that I actually came in contact with that had an injury from the attacker.”

Another witness named Savannah credited strangers with helping her escape through a broken window:

A guy was able to throw me out the window. They had chairs and threw them out the window, and they were able to take me and my girlfriend out the window and carried us out here. I was able to get out, so I don’t know how long it was going on for but it felt like at least five minutes. It probably went on for at least 10.

Sgt. Ron Helus, a 29-year veteran of the Ventura County Sheriff’s Office near retirement, was killed after entering the bar to stop the attacker. He was shot several times upon going through the bar’s main entrance. Authorities said he undoubtedly saved lives by going in to confront the gunman.

“He was totally committed. He gave his all and tonight, as I told his wife, he died a hero because he went in to save lives, to save other people,” said Ventura County Sheriff Geoff Dean.