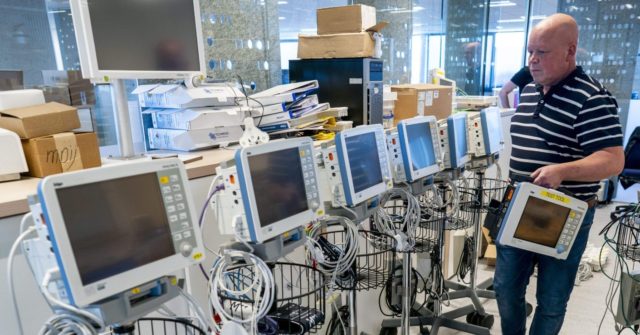 The CEO of a major medical equipment manufacturer has said that those who refuse a jab, in his mind, should be ‘automatically considered’ to have forgone the right to COVID treatment in hospital at public expense.

Stefan Dräger, CEO of major German manufacturer of medical equipment, Dräger, has said that those who reject the opportunity to be jabbed against the Chinese Coronavirus should be refused publicly funded hospital treatment for the disease.

Dräger is reportedly one of the biggest manufacturers of ventilators in the world, with the company also specialising in incubators and patient monitoring systems.

During an interview with Welt, the medical company’s CEO denounced mandatory vaccination regimes for taking the responsibility away from individuals.

Instead, during the interview, he advocated for an approach that would see those who refuse a jab as automatically having a “living will” which waves their right to publicly funded treatment for COVID in hospital.

“In my opinion, every citizen should get a vaccination offer. If he refuses, this is automatically considered a living will to forgo treatment in the hospital at the expense of the general public in the event of illness from the virus,” Stefan Dräger argued.

“This avoids overburdening hospitals and staff.” he continued.

Dräger argued that this approach would increase the level of responsibility individuals within Germany have for the current medical state of affairs.

“What bothers me about mandatory vaccination is that the state then makes the decision for the people and relieves them of their responsibility,” the German CEO argued.

“In my opinion, a large, silent majority in our country is currently suffering from an unrepentant minority,” he continued. “I also mean this in a medical sense, for example [since] the treatment of other illnesses or operations has to be postponed.”

Also discussed by the CEO was the company’s failed COVID testing product — which would have seen users film themselves doing a test for the virus to allow authorities to verify its legitimacy — over which he seemed to express a certain level of frustration.

“We developed an individual test with video surveillance and a test certificate,” Stefan Dräger said. “You take the test at home and film yourself doing it. Your identity, the video and the test result are checked via an app and a call centre.”

“This is ideal if you need the test for everyday work. But then the federal government decided not to allow video evidence for a certificate,” he noted. “As a result, our product has become too expensive and no longer competitive with the cheap Chinese tests in the test centres.”

“It would be very important, especially for the preservation of the critical infrastructure, to have such a low-threshold test offer, for example for employees in service occupations with the 3G rule,” the CEO also claimed.

As countries across Europe look to loosen lockdown restrictions, Germany is instead opting to follow its neighbour Austria and implement a regime of forced vaccination for the Chinese Coronavirus.

The possibility of not opting for either policy, and instead scrapping plans for forced vaccination entirely also remains on the table, but appears to have limited support from politicians within the federal republic.

However, one of these politicians who have voiced support for forced jabs, the nation’s new Chancellor, Olaf Scholz, has seen his popularity collapse since taking office late last year.

Scholz, who is a member of the left-leaning Social Democratic Party, has seen support dwindle from 63 per cent of Germans who thought he’d be a good chancellor before taking office, to 32 per cent who now think he is a good Chancellor since he took the job in December.

Along with his hard pro-forced vax position, Scholz has also seen controversy over his handling of the increasing cost of energy in Germany, as well as his perceived absence during the standoff between Russia and the Western powers.