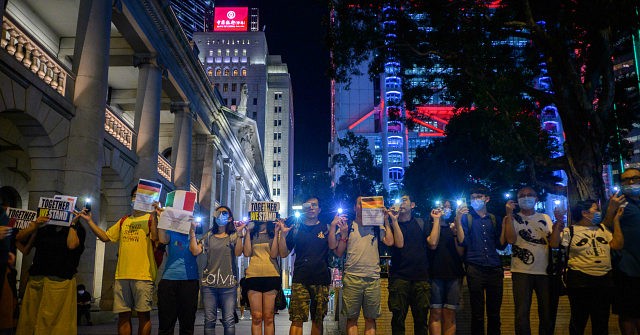 The National People’s Congress (NPC), the rubber-stamp legislature of the Chinese Communist Party, received a draft copy on Friday of the security law Beijing is planning to impose on Hong Kong.

Critics in Hong Kong and around the world warned that imposing the law would spell the end of the island’s special status as an autonomous haven of freedom and foreign commerce, while the Beijing-controlled administration of chief executive Carrie Lam insisted the NPC’s orders will not compromise Hong Kong’s Basic Law.

“I know everyone is panicking and worrying. I also wonder what will become of Hong Kong after the National Security Law has passed. How many will be prosecuted? How many groups will be replaced? To what extent will the oppression be? Will we be transferred to China? Arrest or imprisonment?” pro-democracy activist Joshua Wong asked at the Hong Kong Free Press (HKFP).

“The Chinese Communist Party is definitely trying to wipe out Hong Kong’s connection with the international community with a catch-all tactic. But no matter what, I think I have the duty to stand firm with my position. There is no reason to give up on fostering possibilities for gaining international support,” Wong said.

Pro-democracy lawmaker Tanya Chan said Friday was “the saddest day in Hong Kong history,” while human rights researcher Patrick Poon called it “the most alarming development I have seen in the past 20 years.”

Activist Nathan Law agreed with Wong that the Chinese security law is intended to isolate the Hong Kong protest movement from international supporters, but he took the heavy-handed tactic as a sign of desperation in Beijing and urged pro-democracy forces to have “the strongest determination to confront the most evil era in history.”

Maya Wang of Human Rights Watch called it “the end of Hong Kong,” while Joshua Rosenzweig of Amnesty International said it was an “ominous moment for human rights in the city.”

“This move affirms that Hong Kong as we knew it is gone and rule of law is now rule by law, with the CCP determining what the laws are and how they will be enforced,” said China expert Bill Bishop, while exiled activist Simon Cheng said his fear of “being kidnapped from Hong Kong to China becomes an undeniable reality,” as he was once forced to confess to “treason.”

Hong Kong executive Carrie Lam, on the other hand, expressed her full support for the Chinese legislation and said it will “ensure the long-term prosperity and stability of Hong Kong” without damaging the Basic Law that protects the island’s autonomy.

“Legislation on national security is undoubtedly within the purview of the Central Authorities. Just as it is in any other country in the world, it is the authority of the country to legislate its own national security,” she argued.

Lam said the draconian Chinese law was necessary to contain the protest movement, an argument unlikely to sit well with the protesters and sympathetic Hong Kongers outside the movement.

“The HKSAR [Hong Kong Special Administrative Region] government noted that the decision only targets acts of secession, subverting state power, and organizing and carrying out terrorist activities, as well as activities interfering with the HKSAR’s internal affairs by foreign or external forces,” she said, blaming the protest movement for escalating violence and vandalism over the past year.

“During this period, organizations advocating ‘Hong Kong independence’ and ‘self-determination’ incited protesters, especially young people, to desecrate and burn the national flag openly, vandalize the national emblem, and storm the Central People’s Government’s office in Hong Kong, and made plans to mobilize so-called ‘international support’ to interfere with Hong Kong’s affairs,” she charged.

The Chinese Communist congress was on the same page, as reported by the state-run Xinhua news service:

Wang Chen, vice chairman of the Standing Committee of the National People’s Congress (NPC) explained the draft decision to the third session of the 13th NPC, which runs from May 22 to 28.

Since the return of Hong Kong to the motherland, China has been firmly implementing the principles of “one country, two systems,” “the people of Hong Kong governing Hong Kong,” and a high degree of autonomy, Wang said.

The practice of “one country, two systems” has achieved unprecedented success in Hong Kong, he said.

But the increasingly notable national security risks in the HKSAR have become a prominent problem, the vice chairman said, citing activities that have seriously challenged the bottom line of the “one country, two systems” principle, harmed the rule of law, and threatened national sovereignty, security and development interests.

Law-based and forceful measures must be taken to prevent, stop and punish such activities, he noted.

Wang said that although China reclaimed ownership of Hong Kong from the United Kingdom over 20 years ago, effective security laws “are yet to materialize due to the sabotage and obstruction by those trying to sow trouble in Hong Kong and China at large, as well as external hostile forces.” The Chinese Communist Party (CCP) has long claimed that the massive protests in Hong Kong were organized by foreign saboteurs, prominently including the United States.

As far as Wang and the CCP’s other legislators are concerned, the security law they plan to impose will “uphold and improve” the “one country, two systems” model rather than destroying it. However, the articles of the draft resolution delivered to the NPC explicitly state that it will take power away from the Hong Kong legislature to prevent efforts to “split the country, subvert state power, organize and carry out terrorist activities, and other behaviors that seriously endanger national security,” a mandate broad enough to cover just about anything Beijing wants to impose on Hong Kong.

Chinese state media naturally hailed the crackdown as necessary and appropriate. Every state media report hit the same talking points about violence, secessionism, and foreign influence, such as the one published by China Daily on Friday:

Given the seemingly unstoppable violence that has been inflicted upon the SAR, an inalienable part of China, and the rise of secessionism in the city — fanned by foreign powers through their barefaced intervention in the internal affairs of the Chinese city — it is absolutely necessary that the country’s top legislature fulfill its obligation to guarantee national security, by strengthening the legal framework with regard to Hong Kong.

There is nothing untoward in this as all countries attach the utmost significance to national security, and the introduction of such a law will safeguard the long-term stability and prosperity of Hong Kong.

What has happened in Hong Kong since June last year indicates that the legal system in the SAR is not only weak with regard to national security – as its limited number of relevant articles are scattered among various laws and regulations, some of which date back to British rule and many of which have been left in a state of dormancy since then – but also frail in its law enforcement power which has been unable to quell the unrest.

Wang also emphasized in recent years, foreign forces have been openly interfering in Hong Kong affairs through legislature, administration, and non-government organizations, and created a fuss by supporting anti-mainland forces and activities, which seriously challenged the bottom line of “one country, two systems.”

In addition, such meddling by foreign forces harmed the rule of law, and threatened national sovereignty, security, and development interests in Hong Kong.

According to Wang and various political analysts quoted by Xinhua and the Global Times, the process of reviewing, amending, and implementing the security law could take up to half a year, although some officials in China and Hong Kong indicated they planned to move much more quickly and could have the job done within a month.