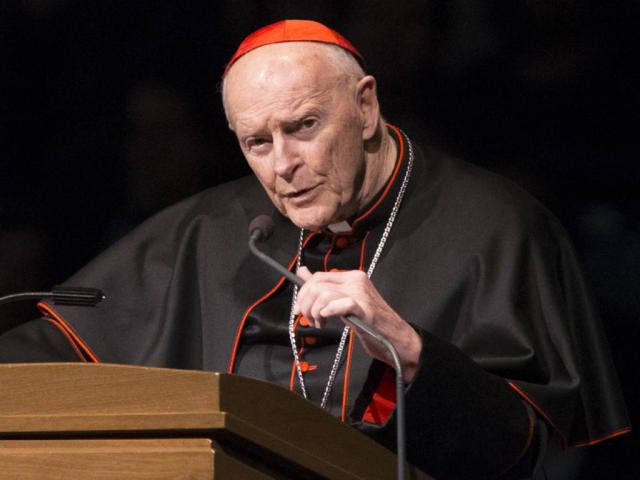 The Vatican is now investigating three separate charges of homosexual abuse against former Cardinal Theodore McCarrick, the latest of which was reported less than three months ago and has just become public.

Though details surrounding the case remain scarce since the alleged victim has chosen to remain anonymous, the man is reportedly in his forties, and the alleged abuse would have taken place when he was a minor.

The online Catholic news outlet Crux broke the story Saturday, noting that as with the case of another of McCarrick’s accusers, James Grein, the latest alleged victim was known to McCarrick through close family friends.

In late December, the Associated Press (AP) released a series of graphic details from Mr. Grein’s testimony against McCarrick, alleging sexual abuse spanning many years beginning when Grein was a boy of 11.

According to Grein’s lawyer, Patrick Noaker, Grein offered “chilling” details about repeated incidents of groping during the sacrament of confession, adding further gravity to the original charges of sexually abusing a minor.

McCarrick’s third alleged victim, a former altar boy at Saint Patrick’s Cathedral in New York, reported two incidents of abuse dating back to 1971 and 1972, claims that were substantiated by an archdiocesan review board last June.

Although these three are the only individuals so far to report having suffered abuse as minors, a number of others have accused the former cardinal of homosexual abuse and harassment occurring when they were over the age of 16.

On July 28, 2018, Pope Francis accepted McCarrick’s resignation from the College of Cardinals.

The U.S. bishops conference (USCCB) opened its own lay-led investigation into McCarrick’s alleged abuse this past September, focusing on the four dioceses in which McCarrick worked: New York, Metuchen, Newark, and Washington, DC.

Since much of McCarrick’s alleged sexual misbehavior involved men who were not legally minors, the bishops’ statement extended the sort of abuse to be reported to include “sexual harassment of or misconduct with adults, including seminarians and priests.”

Unlike the Vatican, the USCCB does not have the canonical authority to require compliance with such an investigation, so it depends on the voluntary cooperation of the four dioceses involved.

In October, the Holy See announced that Pope Francis had ordered a “thorough study of the entire documentation present in the archives of the dicasteries and offices of the Holy See” regarding the McCarrick case, in order to ascertain “all the relevant facts, to place them in their historical context and to evaluate them objectively.”

The Vatican’s statement said that the Holy See had been notified by the Archdiocese of New York of accusations against McCarrick as early as September 2017.

In an 11-page bombshell report released in late August, a former papal nuncio to the United States, Archbishop Carlo Maria Viganò, testified that he had personally informed Pope Francis about McCarrick’s record of abuse in 2013, not long after the pope’s election. Despite this knowledge, Viganò said, the pope lifted restrictions on McCarrick that had been imposed by his predecessor, Pope Benedict XVI, and restored him to a position of influence in the Vatican.

Crux reported that the Vatican’s Congregation for the Doctrine of the Faith (CDF) will convene in mid-January to review all charges against McCarrick and could have a first ruling as early as the end of the month.