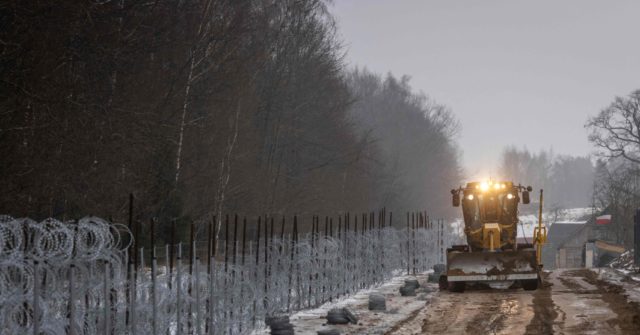 Several non-governmental organisations (NGOs) and others have called on Poland to stop the building of its anti-illegal immigration border barrier along the border with Belarus, claiming it could harm the local environment.

A group of 150 NGOs from 25 countries called on Poland to halt the border wall project in a letter sent to the European Union Commission in Poland earlier this week stating their concerns that the border barrier could have a negative environmental impact in the border area.

The Polish NGO Grupa Granica, a pro-migrant social movement of activists that monitors the situation along the Polish-Belarus border, claimed that as many as 1,600 scientists from Poland and other countries had signed the letter urging Poland to stop construction.

“In Bialowieza Forest, the wall will break the connection between the forest habitats of Belarus and Ukraine with the forests of central and western Poland, and then Western Europe. It is along this route on a continental scale that species such as the wolf, lynx, bison and elk move,” the letter states.

Poland Has Blocked 600 Migrants From Crossing Border Illegally so Far This Yearhttps://t.co/3Yhms84qf2

“The presence of the barrier will result in stopping the free migration of animals. Experts already predict that the construction of the wall may lead to the collapse of the lowland lynx population in Poland. By negatively affecting many key natural processes, the wall also threatens the maintenance of the Białowieża Forest’s status as a UNESCO World Heritage Site,” the letter adds.

The signatories also argue that the building of the wall will not end mass migration, claiming that climate change and its consequences are driving mass migration.

Last month, Poland began the construction of its border wall, which is estimated to cost the country around 1.6 billion Polish zloty (£350 million, $395 million) and will stretch for 115 miles, with the barrier expected to be complete by June.

The barrier is being built in reaction to the surge of migrants who crossed from Belarus illegally last year into Poland, with over 11,000 illegals passing through Poland to Germany and multiple violent scenes at the border recorded.

Poland has blamed the Belarusian regime of President Alexander Lukashenko for the migrant crisis.

In November, Poland’s Prime Minister Mateusz Morawiecki called the actions of the Belarusian regime “hybrid warfare” and stated, “From a distance, these events may look like an ordinary migration crisis, but they are not. This is a political crisis created for a special purpose. The objective is to destabilise the situation in Europe first time since the end of the Cold War, 30 years ago.”