Marco Noel Novoa survived over a week of intense torture in a Nicaraguan prison, exacerbated by the communist regime knowing his status as a U.S. citizen and fearing he was working for the CIA. In remarks to Breitbart News this week, Novoa says the violence against pro-democracy student protesters like himself continues, even if international media attention has waned.

Novoa, 27 – who was born in Macon, Georgia, but was studying in Nicaragua when protests began in April – has returned to Miami, Florida, since his harrowing experience in his family’s native country, where he says he was subject to rape, electroshock, waterboarding, and psychological torture. He insists that the cause of removing Sandinista dictator Daniel Ortega remains more important than ever. Novoa says he now has a “duty” to speak for those who remain in Managua’s notorious “El Chipote” prison and similar torture centers nationwide.

“My mission is to talk as much as I can and to tell the media what is happening in Nicaragua,” Novoa told Breitbart News. “Right now, I’m speaking on behalf of those who are in prison, tortured, and afraid. I am making the world aware of the terrible situation that is happening in Nicaragua. I am looking for justice for those who are where I was who are not as fortunate as I am.”

“It is my duty to make everyone know. They took my humanity, but they will never take my heart and soul,” Novoa added.

Protests began in April, when Ortega’s regime announced it would make cuts to pension payments. Ortega responded to the then-comparatively small protests by ordering police to use tear gas and rubber bullet, then live ammunition, to subdue protesters by any means necessary. The result has been a national outcry for the removal of the Sandinista government and a return to a free society, which Nicaragua has not fully had since Ortega came to power in 1979, led in large part by student protesters and supported by a robust call for freedom from the local Catholic Church. 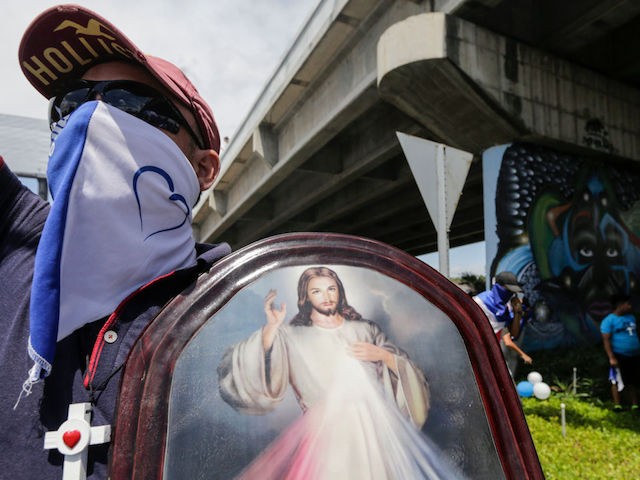 A man carries a religious image during a protest against Nicaraguan President Daniel Ortega’s government in Managua, on September 15, 2018. INTI OCON/AFP/Getty Images 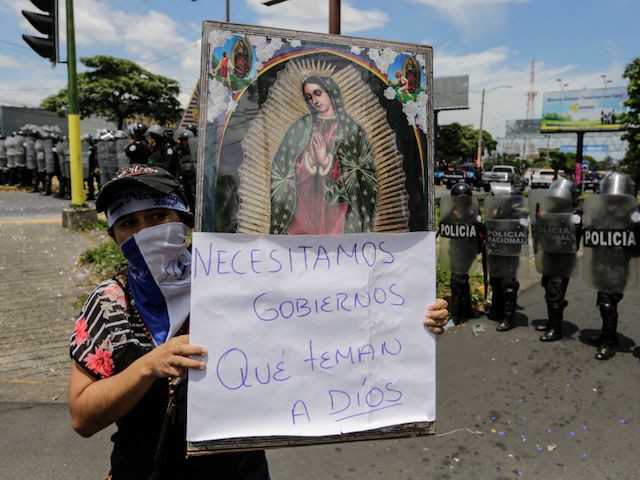 A woman carries an image of the Virgin Mary with the caption “we need governments that fear God.” INTI OCON/AFP/Getty Images

For the past five months, Ortega and his regime have insisted that the protests to oust him from power are a subversive American plot to topple one of the closest allies of the most anti-American regimes in the region, including the failed states of Venezuela and Cuba. Ortega has personally blamed the United States for allegedly paying protesters to organize rallies calling for his removal. He has not offered any concrete evidence for his claims, which Washington denies.

Speaking to Breitbart News, Novoa made a point of his U.S. citizenship, highlighting that the Ortega regime apparently did not fear diplomatic repercussions in its relationship with Washington when they tortured him.

“I’m not only Nicaraguan, I was born in the States, they tortured a U.S. citizen,” he said. Novoa believes that his U.S. citizenship was part of why Sandinista officials tortured him so rigorously. “They thought that I was a CIA agent, they thought it was a plot, like that the Americans had a conspiracy … they wanted to take information [from me] that I didn’t even have.”

Novoa says his government torturers grew frustrated with the fact that he could not offer them any information regarding a CIA plot because he was not involved in one: “They found out I was innocent and they just threw me out of a moving car.”

Novoa was arrested on May 24, 2018, and since his release has detailed what Nicaraguan authorities subjected him to in detail. Speaking out in July, Novoa said officials regularly electrocuted him, waterboarded him, broke the small bones in his feet, and sodomized him with an unknown object. When he was arrested, the police who apprehended him claimed to be gang members. Gang members, of course, would not have access to government prisons, where Novoa ended up. He says he was released after being forced to film a video at gunpoint claiming he was a violent rebel.

While Novoa’s personal suffering has ended, he tells Breitbart News he feels the need to advocate for the hundreds of young protesters remain behind bars, enduring the same human rights violations that he did.

“Right now, the situation in Nicaragua has worsened because there is not a lot of media coverage, especially in English,” Novoa says. “It’s been tough because they don’t even allow press to go inside Nicaragua, they are confiscating their cameras and the government itself is trying to eliminate all [opposition] and sell their point of view.”

The result of the suppression of reporting from inside the country has been a tide of left-wing propaganda legitimizing Ortega and claiming an end to the protest. Vice President and First Lady Rosario Murillo declared that the situation in the country had “normalized” this month, inviting tourism revenue and urging international media to look away. The government has invested some of its funds into orchestrated Sandinista parades to give off the appearance that the regime is popular, eagerly covered by government-allied leftist outlets like Telesur. 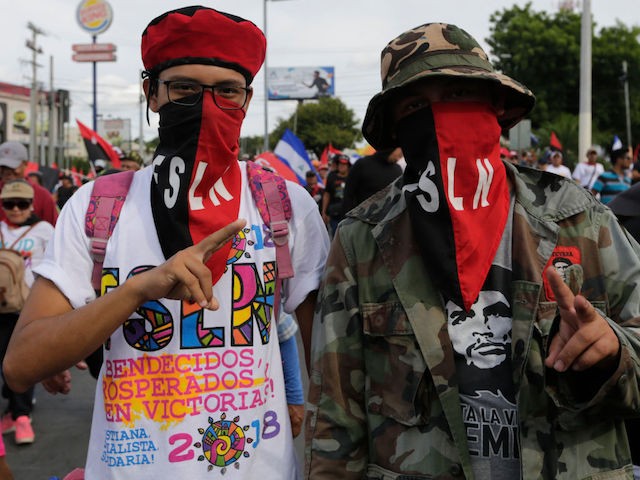 Yet protesters have not given up. A week ago, on September 16, thousands took the streets of Managua demanding Ortega’s resignation, eclipsing the Sandinista counter-protests. The “Rescuing the Homeland” march featured entire families, some with young children, calling for an end to the leftist regime. 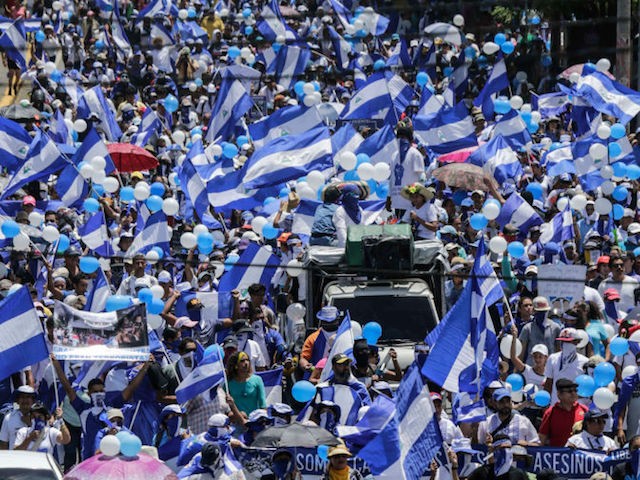 Reports of extreme human rights violations against pro-democracy protesters have also continued to surface. Protester Alex Vanegas told the Agence France-Presse this week that officials threatened to throw him into one of the nation’s many active volcanoes.

Bryan Rogelio Cruz Calderón’s sister, Anastasia Cruz, say police accused her brother of participating in protests, arrested him, and proceeded to “stab his testicles,” make “perforations” in his anus, “cut his abdomen, leaving his intestines exposed,” and shot and beat him.

Masked men broke into the home of León priest Father Abelardo Toval Ayesta on September 15, beating him and attempting to asphyxiate him. As the Catholic Church has protected protesters, Ortega has made priests and churches prime targets for violence and desecration.

An unidentified 14-year-old published a photo of his arm with the letters FSLN (Sandinista National Liberation Front) slashed deeply through them, allegedly the work of eight policemen in Managua.

“The level of brutality and the level of violations of human rights hasn’t been seen in Latin America and the Western Hemisphere for the last 50 years,” the activist told Breitbart News. “If you were to compare this, you would compare it, probably, to what is going on in the Middle East, in Syria.”

Haley has urged the Council to act, citing the possibility of a major exodus of refugees from Nicaragua similar to the Venezuelan migrant crisis.

Human rights groups estimate that between 322 and 481 people have died in government protests, another 2,000 have been injured, and unknown hundreds kept as political prisoners. Ortega blocked the Interamerican Commission for Human Rights (CIDH) from visiting prisons this week. 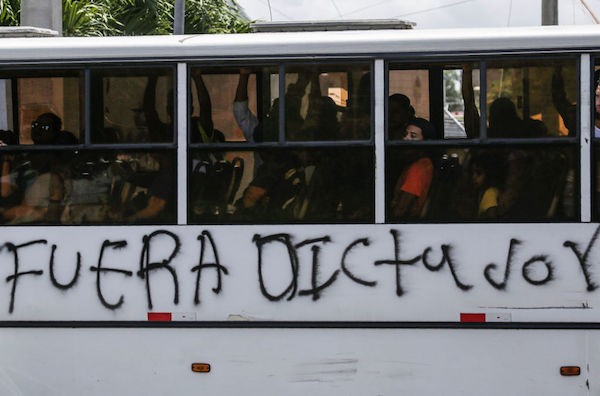 A bus shows a graffiti reading “Out Dictator” during a protest against Nicaraguan President Daniel Ortega’s government in Managua, on September 16, 2018. INTI OCON/AFP/Getty Images