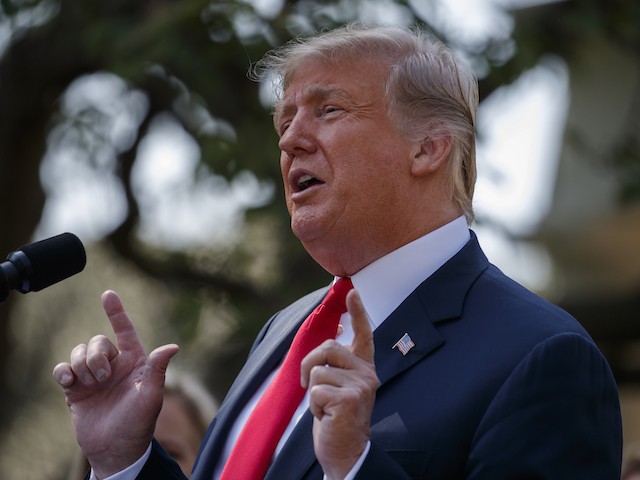 President Donald Trump hit senators on the left for their hypocrisy over Judge Brett Kavanaugh’s use of alcohol in college and high school on Monday.

“I happen to know some United States senators,” Trump said. “One on the other side, who is pretty aggressive, I’ve seen that person in very bad situations … somewhat compromising.”

The president commented on the sudden focus on Kavanaugh’s testimony on his drinking habits during a press conference at the Rose Garden at the White House.

“I watched the senators on the Democrat side and I thought it was a disgrace,” Trump said. “Partially because I know them. I know them too well and you know what? They are not angels.”

Trump also pointed specifically to Sen. Richard Blumenthal for lying about his service in Vietnam.

“He lied!” Trump said. “I don’t mean a little bit … he’s a guy who lied and now he’s up there talking like he’s holier than thou.”

Trump also pointed to Sen. Cory Booker, claiming that he had failed as the mayor of Newark and admitted to bad behavior in high school and college.

He said he suspected that Sen. Dianne Feinstein leaked information about Kavanaugh’s anonymous accuser, citing her confusing “body language” when she denied being a source.

Trump said that Kavanaugh had led an “exemplary” life and that it was disappointing that his enemies had to go all the way back to high school to attack his record.

“He’s a good man with a great family, I think he’s been treated horribly,” he said.

Trump noted that everyone’s behavior from high school and college could be used against them.

“There are bad reports on everybody here,” Trump said. “Except for Mike Pence, by the way, and if we find one on him that’s going to be the greatest shock of all time.”

Trump praised Kavanaugh for being honest and forthcoming about his drinking, noting that it was a difficult standard to enforce.

“I saw a lot of people drinking,” he said. “They drink beer and go crazy and they were in High School, they were 16, 17 years old,” he says. “I saw a lot of it. Does that mean that they can’t do something they want to do in their life? It’s a very tough thing.”

Trump said that he never had a drink, even in high school and college.