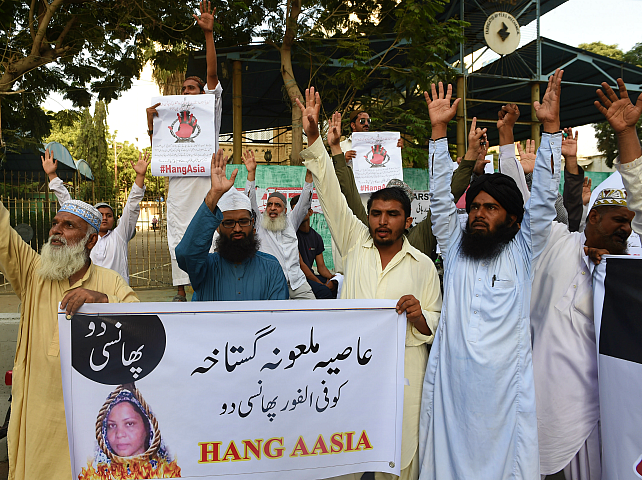 Theresa May has reportedly refused to grant a Pakistani Christian woman being hunted by lynch mobs for “blasphemy” asylum, after bureaucrats advised her it would cause upset in Britain’s Muslim community.

Asia Bibi’s ordeal began when Muslim fieldworkers objected to her drinking from the same water supply as them, branding her “unclean” and telling her she should convert to Islam, which she declined to do.

Days later, village imam Qari Muhammad Salaam declared she had committed blasphemy over the mosque loudspeakers. A baying mob dragged her before a makeshift sharia court with a leather noose around her neck, again demanded that she convert, and beat her with sticks and sandals when she again refused.

The mob then handed her over to the authorities, who laid formal charges against her in a town court which handed down a sentence of death by hanging after a 30-minute hearing.

Eight years on death row in solitary confinement followed before her conviction was finally overturned in a Supreme Court appeal — but this triggered a wave of furious protests by thousands of radical Muslims demanding her execution go ahead.

They have been hunting her from house to house in order to dispense vigilante “justice” since she was released. Two of her political supporters, Punjab governor Salman Taseer and Minister for Minorities Shahbaz Bhatti, have already been assassinated, and her life remains in peril — but the British prime minister has refused to grant her asylum.

The United Kingdom plays host to a startling number of foreign and dual nationals involved in radical Islamic terrorism, hate preaching, organised crime, and even war crimes, and Theresa May recently agreed to take thousands of young male illegal migrants claiming to be children from safe, first world France.

She declined to take in Mrs Bibi, however, after unelected civil servants — on whom she relies heavily for advice on Brexit, foreign policy, and much else — advised her that it could “stoke tensions” among Britain’s over three million strong Muslim population, and prompt radicals overseas to attack British embassies and consulates.

“[Home Secretary] Sajid [Javid] was very sceptical about the official advice, and pushed hard for her to be given asylum here,” claimed a senior government source quoted by the Mail on Sunday.

“It eventually landed on the Prime Minister’s desk, but she just followed the advice of the officials,” they added.

“[L]ots of Christians are disappointed by the British government not allowing her into the UK,” commented Qamar Rafiq, a human rights activist who had lobbied for Britain to take Mrs Bibi in.

“If she stays here longer, she will be killed. I am disappointed [Theresa May’s government] have not offered her asylum,” added Joseph Nadim, a friend of Mrs Bibi and fellow Chrisitan.