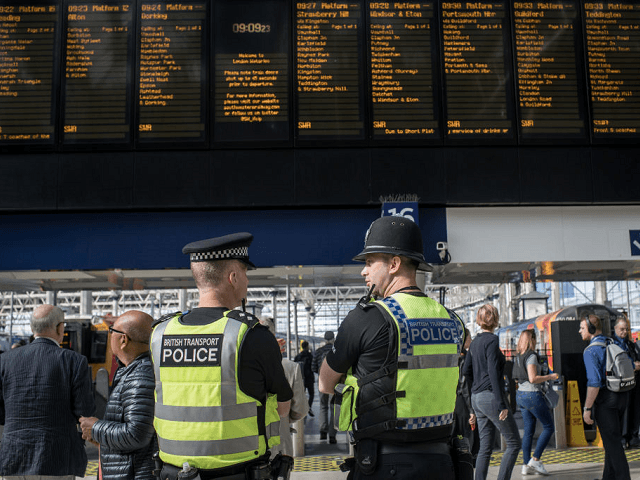 Crime on Britain’s railways has seen a steep rise, with the growth in reports being driven by violent crimes like public order offences, robbery, and sexual assault.

Reported crimes rose from 52,235 during the 2016-17 period to 61,159 in 2017-18, an increase of 17 percent, the British Transport Police have revealed. New statistics show particular growth in some areas, with violence against the person rising 26 percent, sexual offences 15 percent, public order offences 33 percent, criminal damage 21 percent, and robbery 52 percent.

Violence against the person now accounts for almost one-fifth of all crimes reported to the British Transport Police.

No Charges Brought Over 90 Percent of Recorded UK Crimes https://t.co/0yiyZBzmMX

While the number of actual murders on British public transport fell from 7 to 4 in the year, the number of attempted murders rose dramatically from 9 to 48. Some crime increases were particularly prominent in certain regions, with London seeing theft of passenger property rise over twice as fast as the national average in the year.

Despite the significant rise across the spectrum of violent crimes, the British Transport Police emphasised that overall crime was low on transport, and that it remains proportionally lower than a decade ago.

Force spokesman Deputy chief constable Adrian Hanstock said of the figures and terror attacks that his officers have had to deal with: “Despite these challenges, it is reassuring to see that the chance of becoming a victim of crime the railway network remains incredibly low.

“In the past ten years, we have seen a significant rise in the number of passenger journeys on the English, Scottish and Welsh railways. With more people than ever travelling on the network, we fully expected to see a subsequent rise in crime in some areas.

“In the last ten years, passenger journeys have increased by 828 million (35%), which means that BTP policed more than 3.2 billion individual journeys during 2017/18. Likewise, railway stations are changing, becoming entertainment and shopping venues in their own right, as a consequence the environment we police is becoming more varied and vibrant.”

The latest statistics for crimes on public transport come against a background of rising crime, in London in particular, which has seen murder and violent crime surging. Breitbart London reported in May on the 44 percent rise in murder in Britain’s capital, an increase that the London Police and Crime Committee called an “appalling escalation”.

Year-end statistics reported in January 2018 showed robbery across the city was up 33 percent, theft 34 percent, and knife crimes were up 31 percent.