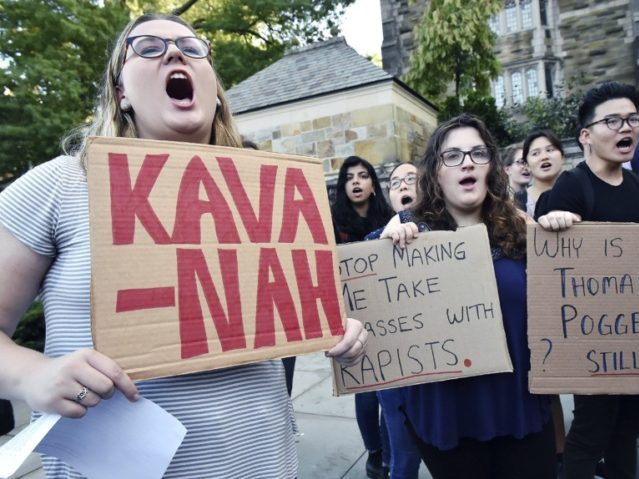 Here are Breitbart News’ picks for the craziest campus stories of the first half of 2019.

College campuses around the country doubled down on their “social justice” insanity in 2019. Here some of our favorite stories from the campus beat from 2019’s spring semester.

In February, the University of Colorado found itself as the defendant in a lawsuit with a Christian student group, who was not able to receive official university recognition on the basis of their proposed rule that the leaders of their group must be Christian.

In direct violation of these principles, the University of Colorado, Colorado Springs (“University” or “UCCS”)—applying both its own policies and those of the University of Colorado Board of Regents—has refused to register Ratio Christi. It has refused to do so specifically because this religious organization seeks to ensure that its leaders share its beliefs and that its members support its mission, even though other student organizations do the same.

Fortunately, the group settled with the university in May. As a result of the settlement, the group will be recognized as an official student organization and they will be permitted to choose their own leaders.

Earlier this year, Long Island University decided to kill off its beloved “Blackbird” mascot. The mascot, which had been in use at the university for 84 years, had been deemed “racist” by some members of the university community

The decision was made based on two factors. The first reason was more benign. Long Island University is merging its Brooklyn and Post campuses, creating one athletic program with a brand new identity. The more nefarious reason for the change is that some members of the community had started to call the “Blackbirds” mascot “racist.”

A group of alumni has started a protest effort to save the “Blackbird” nickname.

In April, a group of students at George Mason University protested the institution’s decision to bring Supreme Court Justice Brett Kavanaugh on as a visiting professor to the law school’s faculty.

“As a survivor of sexual assault this decision has really impacted me negatively,” one student said during a campus meeting. “It is affecting my mental health knowing that an abuser will be part of our faculty.”

Earlier this year, students at Georgetown University voted to create an annual reparations fee that will indirectly go towards the descendants of the slaves that were once owned by the institution.

Over two-thirds of all students that participated in the referendum voted in favor of the new reparations fee. The fee will cost each student $27.20 each semester and be added directly to the student’s tuition costs.

In March, the Department of Justice charged over 40 parents over their participating in a wide-ranging college admissions scheme orchestrated by William “Rick” Singer. As a part of the scheme, some parents paid bribes as high as $1 million to have their children admitted to elite universities.

Former Full House actress Lori Loughlin could spend a significant number of years behind bars for her role in the scheme. According to the charges, Loughlin and her husband paid $1,000,000 in total bribes to have their two daughters admitted to the University of Southern California. As a part of the scheme, Loughlin had her daughters pose on rowing equipment. The photos were then used to create fake athletics profiles to aid in their admission to the university.