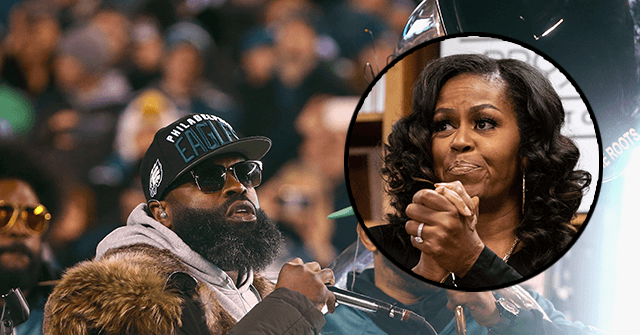 The Roots is kicking off their 13th annual “Roots Picnic” this summer and teaming up with former first lady Michelle Obama’s voter organization When We All Vote and its celebrity backers, including Tom Hanks and Lin-Manuel Miranda.

“Who else is coming to #RootsPicnic?!” wrote the organization in a caption on Instagram. “We’re partnering with [The Roots] and [Live Nation Urban] to create a virtual music festival experience like we’ve never seen. Join us, [Michelle Obama], and more on June 27th.”

The event will be hosted by Questlove and Black Thought of The Roots and Michelle Obama, and will feature appearances by When We All Vote celebrity backers Tom Hanks, Kerry Washington, Lin-Manuel Miranda, Chris Paul, Liza Koshy, Tracee Ellis Ross, Janelle Monáe, Elaine Welteroth, and more.

The goal of the virtual festival is also to reach 500,000 eligible voters, and When We All Vote — which aggressively pushes voting by mail with the help of left-wing celebrities — also has volunteers that will be signing up to text voters throughout the show, according to a report by Billboard.

Furthermore, When We All Vote claims that voting by mail is necessary due to the Chinese coronavirus pandemic, but some are unsure how believable that claim is, given that left-wing celebrities also now appear to approve of large protests en masse in the streets.

Moreover, in some cases it has been found that illegal aliens receive mail-in ballots because they were automatically registered through their drivers licenses. The left’s push for vote by mail has also raised concerns about ballot harvesting, which empowers political operatives to collect and deliver mail-in ballots — an initiative that is illegal in some states.

But When We All Vote nonetheless maintains that it is “on a mission to change the culture around voting,” according to the organization’s managing director of communications and culture, Stephanie L. Young. “We could all use a moment of inspiration and light to help focus on what we can do to take action together — and that action is voting. And we are committed to closing the age and race gap of those who show up at the ballot box, increasing participation in each and every election.”

“To change the culture means we have to be in the culture, and iconic events like the The Roots Picnic, a celebration of the most influential artists of today, is just that,” Young added.

Meanwhile, the manager for The Roots, Shawn Gee, expressed his belief this year is “imperative” for the platforms of The Roots and Live Nation Urban to be utilized “as vehicles for both voter education and voter registration.”

“Our goal is to aggressively impact change and we’re going to have some fun while doing so,” said Gee. “This year, we are incredibly proud to partner with Mrs. Obama’s When We All Vote to ensure our audience has the resources they need to register and vote in November’s election.”