Queen Elizabeth II has become the first monarch in British history to hold the throne for seventy years on Sunday, which marked the start of her Platinum Jubilee celebrations to honor her decades of service to the British people.

As well as being the British head of state and the head of its armed forces, Queen Elizabeth II, 95, also serves as the head of 14 other Commonwealth Realms including Canada, Australia, New Zealand, and Papula New Guinea.

Born Elizabeth Alexandra Mary Windsor, Princess of York, on April 21st, 1926, The Queen has become the first British monarch to have reigned for seventy years after ascending to the throne on February 6th, 1952 following the untimely death of her father, King George VI.

The celebrations for the Platinum Jubilee will feature, street parties, concerts, and a Platinum Jubilee Pageant. The Queen’s private estates at Sandringham and Balmoral will also be open to the public on the culminating bank holiday weekend of the Jubilee from the 2nd to the 5th of June. 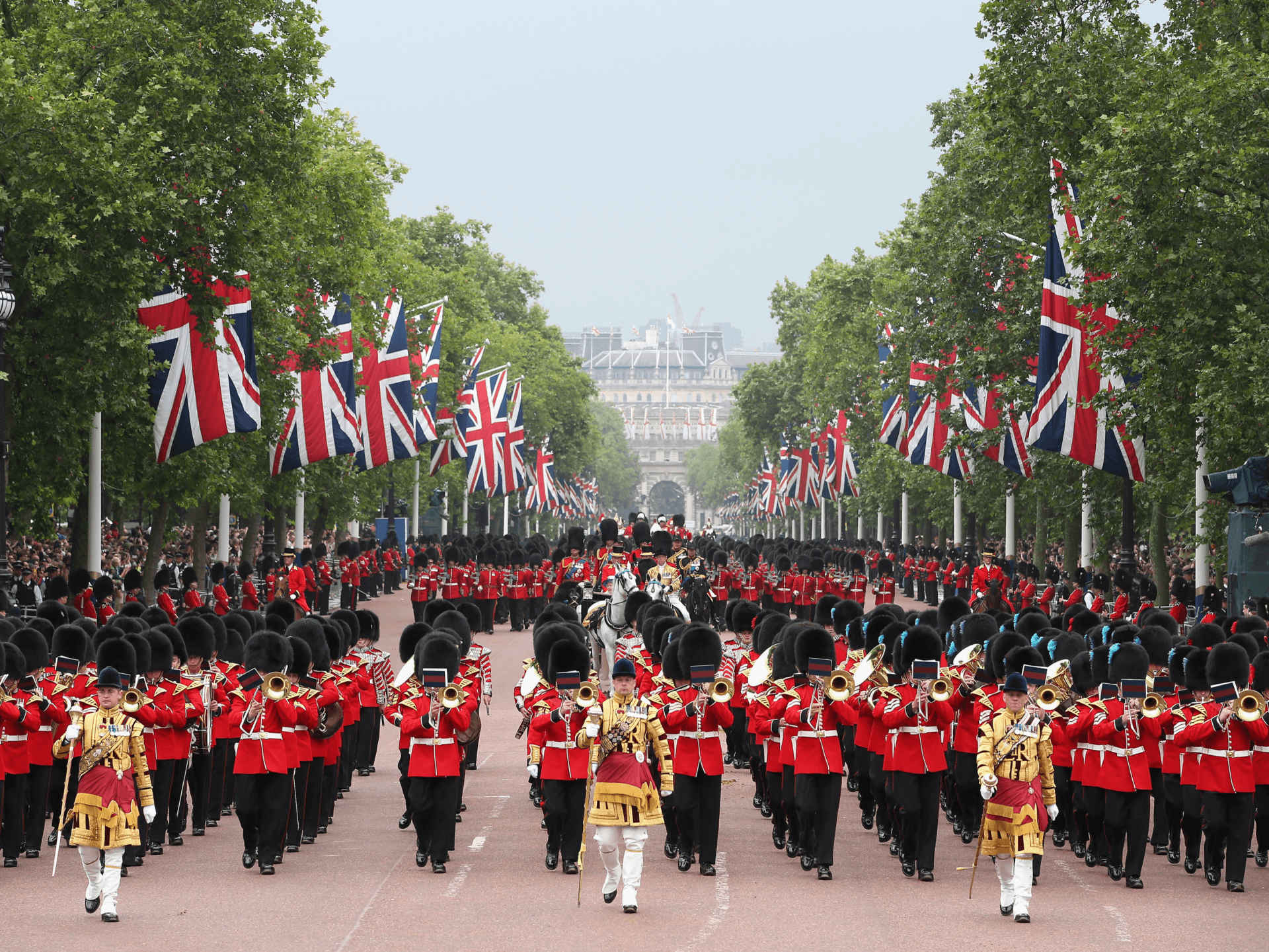 From her early days as a glamorous young royal in glittering tiaras to her more recent incarnation as the nation’s grandmother, the queen has witnessed the end of the British Empire, the advent of multiculturalism, the rise of international terrorism, and the challenges posed by Brexit and the COVID-19 pandemic.

In a world of relentless change, she has been a constant — representing the U.K.’s interests abroad, applauding the nation’s successes and commiserating in its failures, and always remaining above the fray of politics.

That constancy should earn Elizabeth a royal epithet like those of her predecessors such as William the Conqueror, Edward the Confessor and Alfred the Great, said royal historian Hugo Vickers.

“I’ve always thought she should be called Elizabeth the Steadfast,” Vickers told The Associated Press. “I think it’s a perfect way of describing her. She wasn’t necessarily expecting to be queen, and she embraced that duty.’’

“We, therefore… do now hereby with one voice and Consent of Tongue and Heart publish and proclaim that the High and Mighty Princess Elizabeth Alexandra Mary is now… Queen Elizabeth the Second” pic.twitter.com/3zwvQDhd05

As the elder daughter of King George V’s second son, Elizabeth, now 95, was expected to live the life of a minor royal when she was born on April 21, 1926. Dogs and horses, a country house, a suitable match — a comfortable but uneventful life — seemed her future.

George VI, whose struggles to overcome a stutter were portrayed in the 2010 film “The King’s Speech,” endeared himself to the nation when he refused to leave London as bombs fell during the early months of World War II. 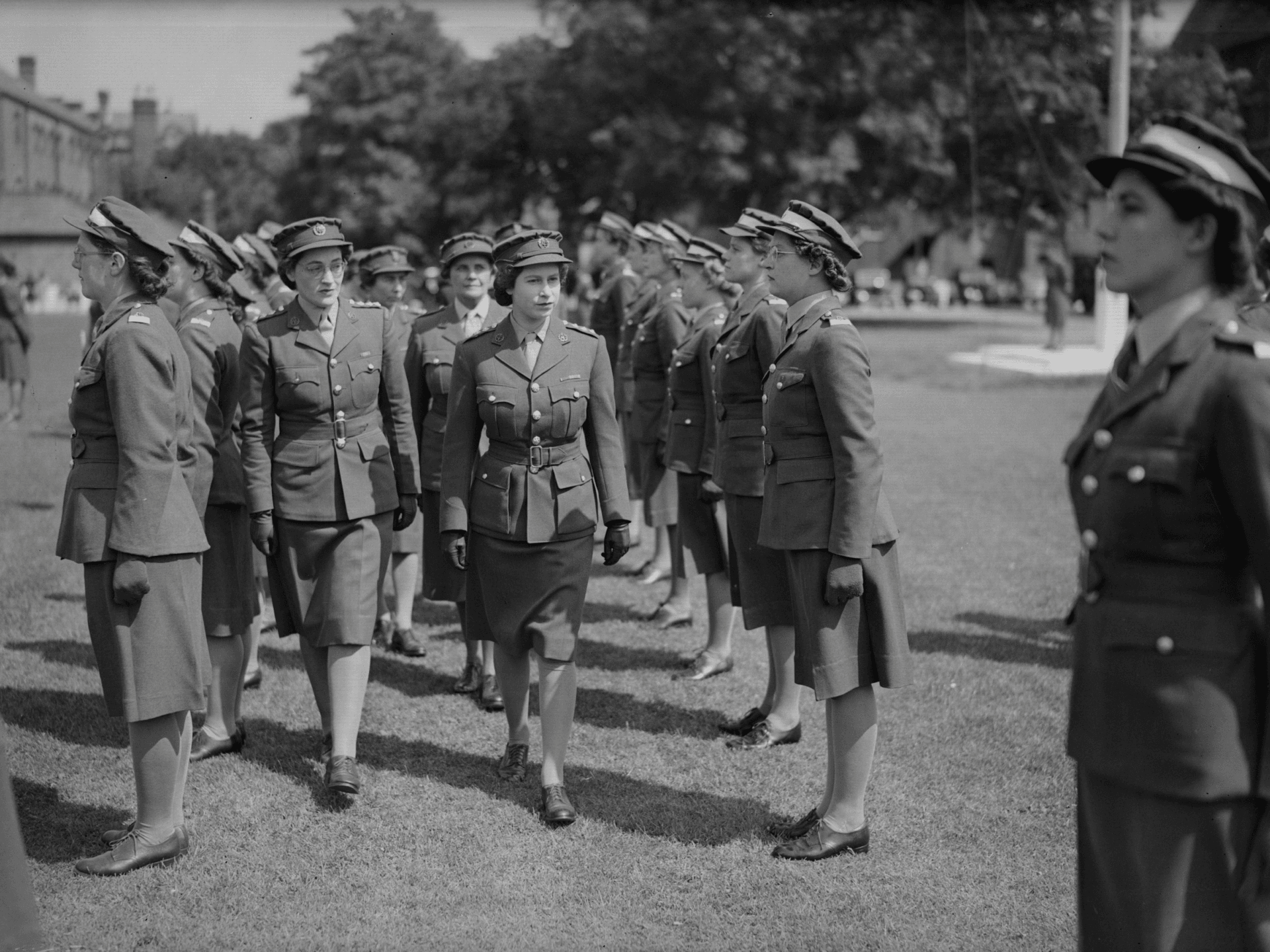 Elizabeth followed her father in leading by example, joining the Auxiliary Territorial Service in early 1945, becoming the first female member of the Royal Family to join the armed services as a full-time active member. On her 21st birthday, she dedicated her life to the nation and the Commonwealth, the voluntary association of states that grew out of the British Empire.

“I declare before you all that my whole life, whether it be long or short, shall be devoted to your service and the service of our great imperial family to which we all belong,” she said in a radio address broadcast around the world.

In 1952, the young princess embarked on a tour of the Commonwealth in place of her ailing father. She was at a remote Kenyan lodge, where she and her husband Prince Philip watched baboons from the treetops, when she heard her father had died.

She immediately returned to London, disembarking the plane in black mourning clothes, to begin her life as queen. She has reigned ever since, with crown and scepter on big occasions, but more commonly wearing a broad-brimmed hat and carrying a simple handbag. 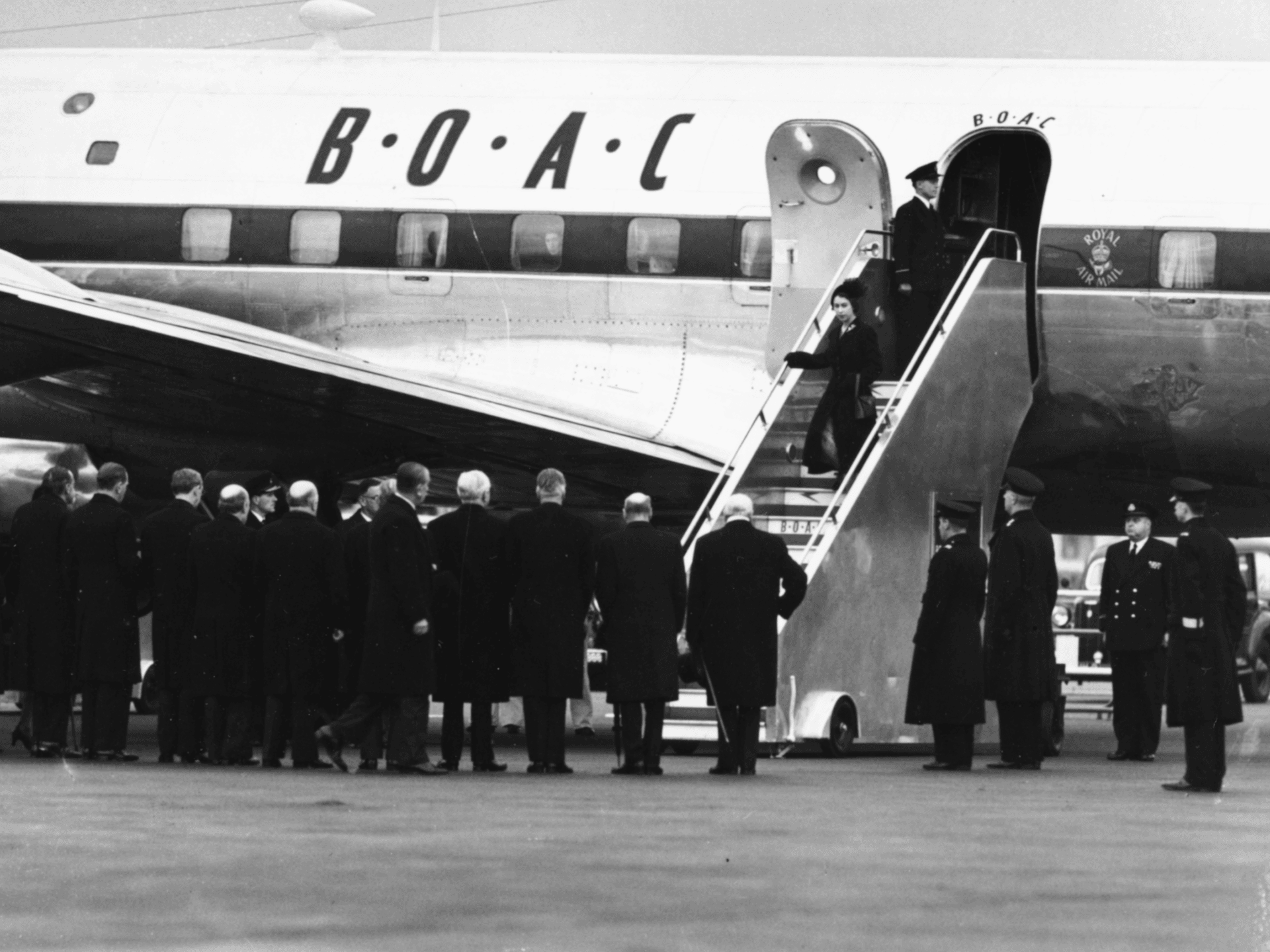 Queen Elizabeth II and Prince Philip, the Duke of Edinburgh, leaving their BOAC airliner as they return from Kenya following the death of King George VI and Elizabeth’s accession to the throne, London, February 7th 1952. (Photo by Keystone/Hulton Archive/Getty Images)

In the intervening seven decades, the queen has shared confidences with 14 prime ministers and met 13 U.S. presidents.

Once a year, she travels the mile or so from Buckingham Palace to the House of Lords for the ceremonial opening of Parliament. And when world leaders come to call she hosts state banquets during which her diamonds flash under the TV lights and presidents and prime ministers worry about whether to bow and when to offer a toast.

But it is the less lavish events that give the queen a link to the public.

At the garden parties that honor the service of everyone from soldiers and charity workers to long-serving school librarians and crossing guards, guests wear festive hats and drink tea as they try to catch a glimpse of the queen on the lawn outside Buckingham Palace. The honorees can spot her at a distance, as it is said she favors bright colors so the public can spot her in a crowd.

Then there is the annual wreath laying at the memorial to those who have died during conflicts around the world, as well as the numerous school openings, hospice visits and tours of maternity wards that have filled her days.

Britain’s longest-serving monarch, the only sovereign most Britons have ever known, has been a constant presence from the Suez Crisis of 1956, when Egypt’s seizure of the Suez Canal underscored Britain’s declining might, through the labor strife of the 1980s and the 2005 terror attacks in London. 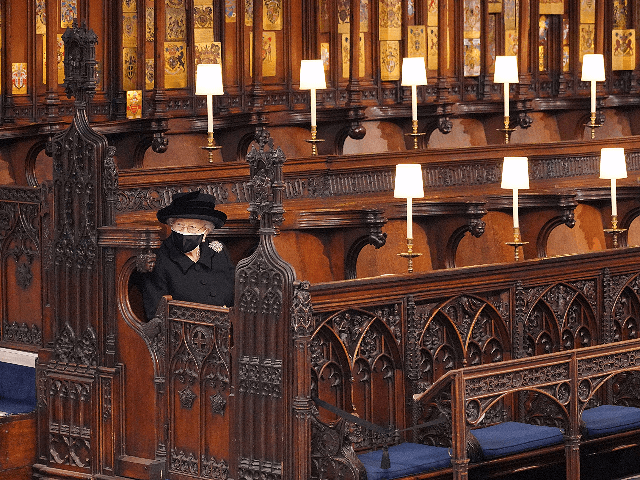 Queen Elizabeth II takes her seat for the funeral service of Britain’s Prince Philip, Duke of Edinburgh inside St George’s Chapel in Windsor Castle in Windsor, west of London, on April 17, 2021. – Philip, who was married to Queen Elizabeth II for 73 years, died on April 9 aged 99 just weeks after a month-long stay in hospital for treatment to a heart condition and an infection. (Photo by Jonathan Brady / POOL / AFP) (Photo by JONATHAN BRADY/POOL/AFP via Getty Images)

When Prince Philip died during the pandemic, she donned a black face mask and sat alone during his socially distanced funeral, silently demonstrating that the rules applied to everyone — particularly her.

“She’s not beholden to the electorate. She’s not dependent on her latest hit or her latest movie,” said Emily Nash, royal editor of HELLO! magazine. “She’s just there. She does what she does. She carries out her duties without ever complaining or making any personal drama. And people respect her for that.”

Not that there haven’t been controversies.

In the early 1990s, criticism of the monarchy increased amid reports of the queen’s private wealth and concerns about the expense of the monarchy. In 1992, the queen agreed to pay the expenses of most of her family and become the first monarch to pay income taxes since the 1930s.

Tensions flared again in 1997 when the royal family’s silence after the death of Princess Diana, the ex-wife of Prince Charles, fueled the resentment of Diana’s many fans. 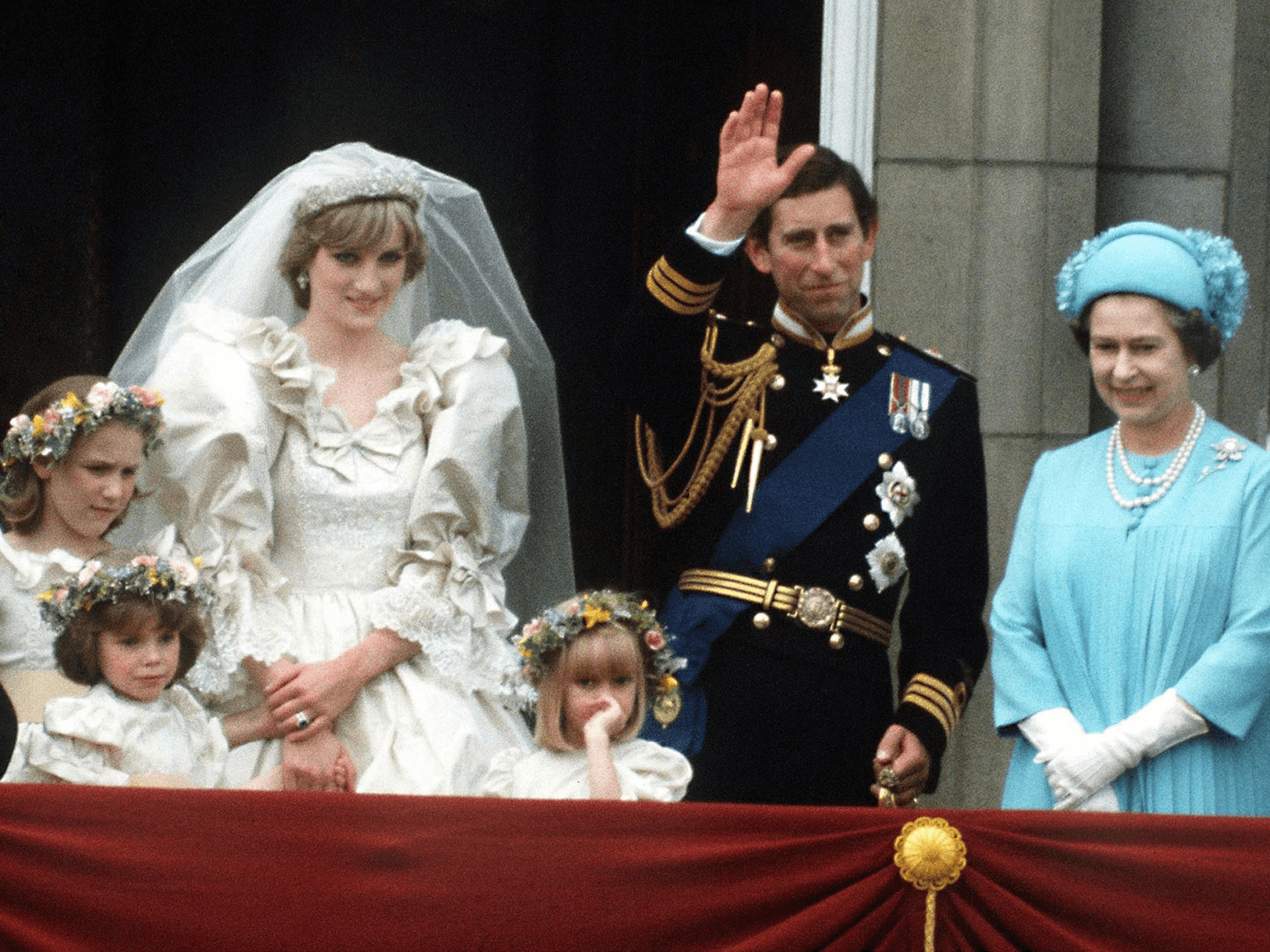 The Prince and Princess of Wales pose on the balcony of Buckingham Palace on their wedding day, with the Queen and some of the bridesmaids, 29th July 1981. (Photo by Terry Fincher/Princess Diana Archive/Getty Images)

Even now, the monarchy is struggling to distance itself from the scandal caused by a sex abuse lawsuit filed against Prince Andrew, the queen’s second son, and the fallout after two of the royal family’s most popular members, Prince Harry and his wife Meghan, ditched their royal duties and departed for California.

But the queen has transcended scandal and remained popular throughout it all, said Kelly Beaver, the CEO of polling firm Ipsos UK, which has tracked her popularity for decades.
“Part of this because she is so synonymous with … the monarchy, which is something the British people are proud of,” Beaver said.

Still, Tiwa Adebayo, a social media commentator and writer who inherited a fascination with the monarchy from her grandmother, believes younger people want “more transparency” — to see the royal family move beyond the adage of “never complain, never explain’’ that has typified the queen’s reign. 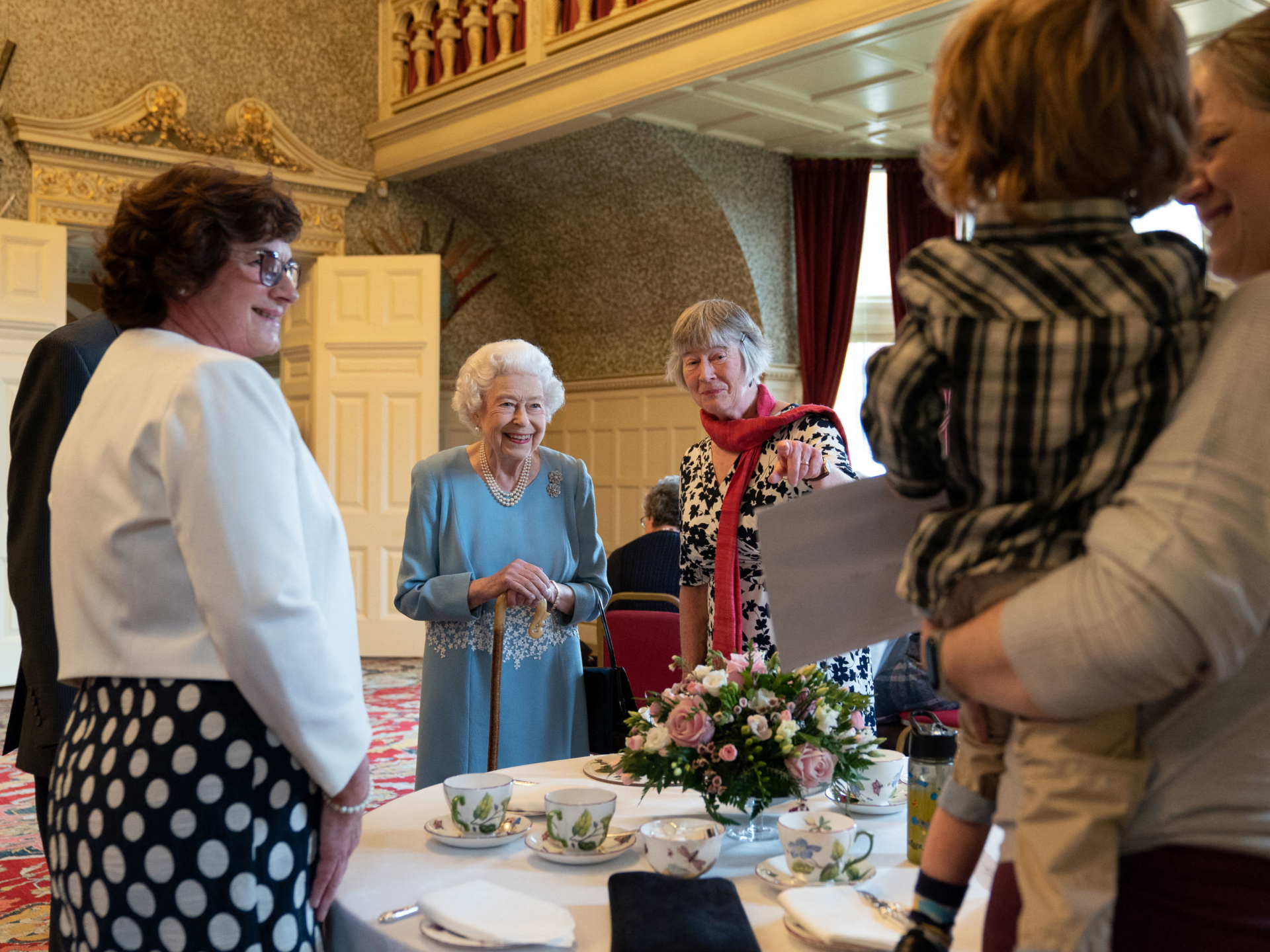 Leading the tributes to Queen Elizabeth II, her eldest son and heir to the throne, Prince Charles celebrated his mother’s “remarkable achievement” of serving as monarch for seven decades.

“The Queen’s devotion to the welfare of all her people inspires still greater admiration with each passing year,” Charles said.

The leader of the left-wing Labour Party, the official opposition, Sir Keir Starmer said in a statement: “On behalf of the Labour Party, I would like to express my deepest thanks to Her Majesty The Queen for seven decades of unparalleled public service”.

Prime Minister and leader of the Conservative Party, Boris Johnson said: “Today marks a truly historic moment as Her Majesty The Queen becomes the first British Monarch to celebrate a Platinum Jubilee.  I pay tribute to her many years of service and look forward to coming together as a country to celebrate her historic reign in the summer”.

For the queen, Sunday is likely to be bittersweet, marking both her long reign and the 70th anniversary of her father’s death.

“I’ve always thought that one of her philosophies really was that, you know, she just wanted to be a really good daughter to her father and fulfill all his hopes for her,’’ Vickers said. “And, you know, assuming that there is an after-life and they meet again, my goodness he will be able to thank her for doing just that.”

Her Majesty is seen with one of her famous red boxes. Over the past 70 years, The Queen has received daily papers from her Private Secretaries, in person or via a red despatch box. pic.twitter.com/CmbyFiWPpm

AP Contributed to this Story