Clashes with the police continued for a second day outside the White House, amid nationwide outbreaks of violence and looting, with one protester seen holding a sign bearing the slogan “The People Want Blood.” 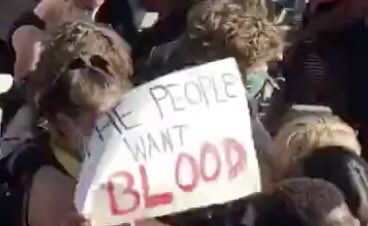 Insanity outside the White House. Three warnings of an unlawful assembly from the Secret Service before storming into the crowd.

A lot of people have been hit with paper spray. In all the chaos, at least one person was tossed to the ground and presumably arrested. pic.twitter.com/Ab2eSkq9CS

The violent protesters can be seen attacking the police wall and hurling objects at assembled officers.

This is the second day of violent protests outside the White House. At last night’s protests, protesters successively attacked two journalists, including Breitbart News reporter Matthew Perdie as they attempted to film the ongoing unrest.

Riots and acts of violence have been reported in cities around the country today, including Philadelphia, Los Angeles, and Newark

In Minnesota, where the riots began, Governor Walz has ordered a full mobilization of the state’s National Guard, for the first time in Minnesotan history.

“They were very cool & very professional. Never let it get out of hand,” said the President.

Trump said that if protesters had breached the White House fence last night, they would have “been greeted with the most vicious dogs, and most ominous weapons, I have ever seen. That’s when people would have been really badly hurt, at least.”

In a press conference at the Department of Justice earlier today, Attorney General William Barr blamed “far-left extremist groups using Antifa-like tactics” for the escalating violence around the nation.

“Groups of outside radical agitators are exploiting the situation to pursue their own separate and violent agenda,” said Barr.

Allum Bokhari is the senior technology correspondent at Breitbart News