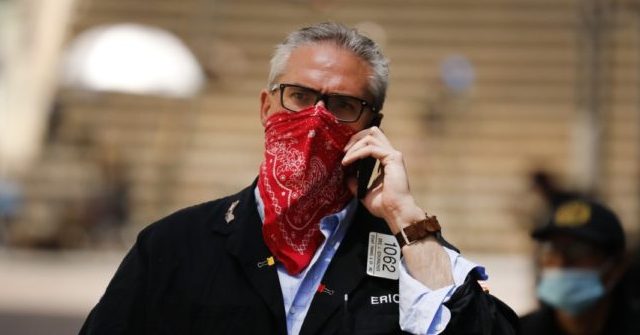 The major U.S. stock indexes rose again Monday even as the official referees of the economy announced the U.S. had entered into a recession.

The Nasdaq Composite rose 1.13 percent to a new record high. The S&P 500 climbed 1.2 percent, turning positive for the year. The Dow Jones Industrial Average moved up 1.7 percent to 27,572.

The National Bureau of Economic Research, the official arbiter of recessions, declared on Monday that the U.S. economy had peaked in February and entered a recession.

The expansion that ended in February lasted 128 months, the longest in U.S history according to records stretching back to 1854. The record was held by the business expansion that lasted for 120 months from March 1991 to March 2001.

“The committee has determined that a peak in monthly economic activity occurred in the U.S. economy in February 2020. The peak marks the end of the expansion that began in June 2009 and the beginning of a recession,” the NBER’s Business Cycle Dating Committee said in a statement

The NBER committee said that although a recession is typically defined as two consecutive quarters of economic contraction, the weight and depth of the current slump justified calling the current economic conditions a recession even though there has only been a single quarter of recession so far. In any case, the second quarter is expected to see the second consecutive quarterly contraction–and one much deeper than the first quarter.

“The committee recognizes that the pandemic and the public health response have resulted in a downturn with different characteristics and dynamics than prior recessions,” the committee said. “Nonetheless, it concluded that the unprecedented magnitude of the decline in employment and production, and its broad reach across the entire economy, warrants the designation of this episode as a recession, even if it turns out to be briefer than earlier contractions.”

But there are signs that the U.S. economy bottomed in April and has started to rebound. The most dramatic of these came Friday when the government announced the economy added millions of jobs, upending expectations that the economy would lose around 8 million jobs.

All 11 sectors of the S&P 500 rose Monday. The best performing sector was energy, which rose 4.32 percent. Despite that gain, the energy sector is down 24.39 percent over the last 12-months, making it the worst performer during the period.

Boeing was the best performing Dow stock on Monday, rising 12.2 percent. Over the past year, shares are down nearly 50 percent. Intel was the worst-performing, falling around 1 percent. It is up over 38 percent over the past 12-months.