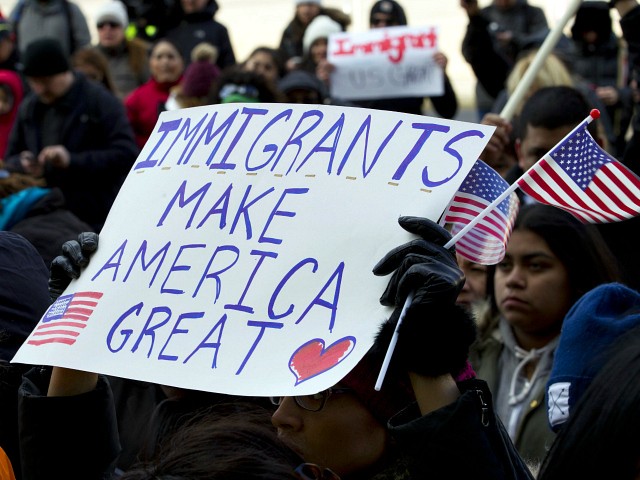 Progressives’ enthusiastic support for mass immigration has converted them into “useful idiots” for the nation’s business elites, says a left-wing writer.

Today’s well-intentioned activists have become the useful idiots of big business. With their adoption of “open borders” advocacy—and a fierce moral absolutism that regards any limit to migration as an unspeakable evil—any criticism of the exploitative system of mass migration is effectively dismissed as blasphemy. Even solidly leftist politicians, like Bernie Sanders in the United States and Jeremy Corbyn in the United Kingdom, are accused of “nativism” by critics if they recognize the legitimacy of borders or migration restriction at any point. This open borders radicalism ultimately benefits the elites within the most powerful countries in the world, further disempowers organized labor, robs the developing world of desperately needed professionals, and turns workers against workers.

Advocates of open borders often overlook the costs of mass migration for developing countries. Indeed, globalization often creates a vicious cycle: liberalized trade policies destroy a region’s economy, which in turn leads to mass emigration from that area, further eroding the potential of the origin country while depressing wages for the lowest paid workers in the destination country. One of the major causes of labor migration from Mexico to the United States has been the economic and social devastation caused by the North American Free Trade Agreement (nafta). Nafta forced Mexican farmers to compete with U.S. agriculture, with disastrous consequences for Mexico. Mexican imports doubled, and Mexico lost thousands of pig farms and corn growers to U.S. competition. When coffee prices fell below the cost of production, nafta prohibited state intervention to keep growers afloat. Additionally, U.S. companies were allowed to buy infrastructure in Mexico, including, for example, the country’s main north-south rail line. The railroad then discontinued passenger service, resulting in the decimation of the rail workforce after a wildcat strike was crushed. By 2002, Mexican wages had dropped by 22 percent, even though worker productivity increased by 45 percent.7 In regions like Oaxaca, emigration devastated local economies and communities, as men emigrated to work in America’s farm labor force and slaughterhouses, leaving behind women, children, and the elderly.

Left-wing servants of business elites spray claims of racism on the public to suppress their rational and reasonable opposition to immigration exploitation, Nagle argues:

The immigration expansionists have two key weapons. One is the big business and financial interests all working on their side, but an equally powerful weapon—wielded more expertly by the left-leaning immigration expansionists—is moral blackmail and public shame. People are right to see the mistreatment of migrants as morally wrong. Many people are concerned about the growth of racism and callousness toward minorities that often accompanies anti-immigration sentiment. But the open borders position does not even live up to its own professed moral code.

The tacit alliance of the wealthy against the middle prompt some invective by the Irish author;

In the wealthiest nations, open borders advocacy seems to function as a fanatical cult among true believers—a product of big business and free market lobbying is carried along by a larger group of the urban creative, tech, media, and knowledge economy class, who are serving their own objective class interests by keeping their transient lifestyles cheap and their careers intact as they parrot the institutional ideology of their industries. The truth is that mass migration is a tragedy, and upper-middle-class moralizing about it is a farce. Perhaps the ultra-wealthy can afford to live in the borderless world they aggressively advocate for, but most people need—and want—a coherent, sovereign political body to defend their rights as citizens.

Read it all here.