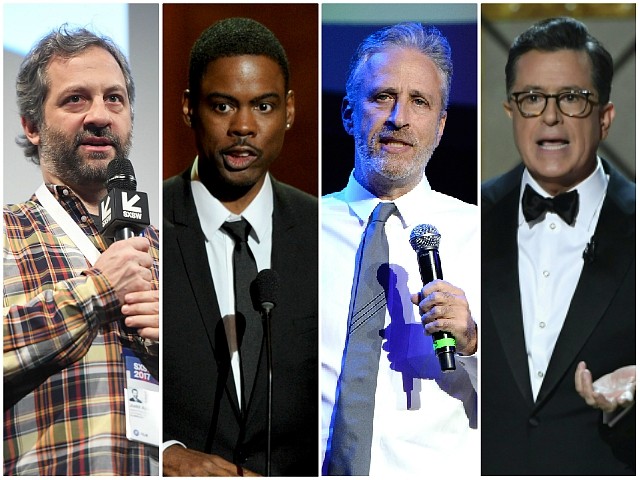 Actor-comedian Kevin Hart stepped down from hosting the Oscars after several old tweets in which he made homophobic jokes resurfaced. The outcry was fast and furious. But under the Kevin Hart Standard — where a comedian’s old jokes are disqualifying under the weight of woke contemporary standards — few top comedians could host the Oscars either.

“I have made the choice to step down from hosting this year’s Oscar’s….this is because I do not want to be a distraction on a night that should be celebrated by so many amazing talented artists. I sincerely apologize to the LGBTQ community for my insensitive words from my past,” Kevin Hart announced Friday after old gay jokes of his surfaced.

Hart’s jokes may be in poor taste. But they pale in comparison to the gay jokes that his contemporaries have regularly peddled. It also raises the question of what is and isn’t acceptable for comedy.
Billy Crystal’s career was launched with his portrayal of gay character named Jodie on ABC’s hit satire show Soap. He hosted the Oscars in 2012 (after Eddie Murphy backed out), but would he be allowed to helm the awards show again given the new standards around humor and homosexuality? Sacha Baron Cohen, who just picked up a Golden Globe nod for his Showtime parody show, posed as a comedian from Finland and asked Joe Arpaio if he would accept an “amazing blow job” from President Trump. Given the new Kevin Hart Standard, would Sasha Baron Cohen be allowed to host the Oscars after making gay sex the butt of his jokes?

Indeed, some of Hollywood most celebrated comedians and filmmakers, from Judd Apatow to Chris Rock, late-night hosts and respected actors, from Stephen Colbert and Jimmy Kimmel have routinely used gay sex acts as punchlines and implied that they are grotesque. All this in a year when the Academy was struggling to find a host, and while Oscars ratings continue to crater.
Here’s a list of top comedians who wouldn’t be allowed to host the Oscars (or a high-profile awards show) under the Kevin Hart Standard.

Comedian Chris Rock, who hosted the Oscars in 2016, did so after making a number of homophobic jokes in his standup bit about “acting like a faggot.”

Chris Rock has another old stand up bit about people getting fired over the word “faggot,” arguing that there is an important context for certain words.

Disgraced comedian Louis C.K. also had an old comedy routine about the word “faggot” where he jokes, “I would never call a gay guy a faggot, unless he’s being a faggot.”

In a 2016 article in the LGBT publication the Advocate, several movies that Rogen starred in or directed were criticized for homophobia over their use of gay jokes and slurs. Judd Apatow worked closely with Rogen for years.

In the 2007 film Superbad, which was written by Rogen and produced by Apatow, the word “fag” is used blatantly.

Comedian Sarah Silverman has several tweets from years back where she uses the word “faggot.”

“I dont mean this in a hateful way but the new bachelorette’s a faggot,” she said in one 2010 tweet.

“I just thought of a great slogan for people who are against gay rights: ‘Keep Faggots Single.’ You’re welcome,” she also joked.

I just thought of a great slogan for people who are against gay rights: “Keep Faggots Single.”
You’re welcome.

In April of this year, Jimmy Kimmel attacked Fox News host Sean Hannity over his relationship with President Trump by making homophobic jokes.

“When your clown makeup rubs off on Trump’s ass, does it make his butt look like a Creamsicle?” the ABC late-night host said.

When your clown makeup rubs off on Trump’s ass, does it make his butt look like a Creamsicle? https://t.co/DEhmfOh0Hn

Dave Chappelle has made several homophobic jokes over his career. In his stand-up special released on Netflix in 2017, he was criticized in an article published by the left-wing New Republic that said his act was “rife with homophobic and transphobic jokes.”

The CBS late-night host was criticized for homophobia after he said in a 2017 monologue directed at Trump, “The only thing your mouth is good for is being Vladimir Putin’s cock holster.”

Tonight: Stephen tells the President everything journalists, restrained by their dignity, wish they could say. #LSSC pic.twitter.com/FHG4jvF8fv

Saturday Night Live star Kate McKinnon engaged in homophobia in September by mocking Senator Lindsey Graham with the implication that he is a gay man.

Former host of The Daily Show Jon Stewart made a transphobic judge in 2003, joking about a transgender person being a judge by saying, “all rise for the honorable Chick With Dick.”

“all rise for the honorable Chick With Dick” —real quote from Jon Stewart in ‘03, re: Kucinich saying he’d consider transgender judges. yow https://t.co/u76ZSKMt2F