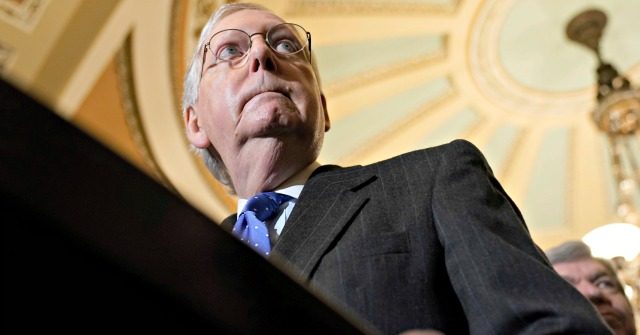 Senate Majority Leader Mitch McConnell is as of now including in the U.S. Senate impeachment trial rules a “kill switch” that effectively allows for the president’s legal team to seek an immediate verdict or dismissal of the case should Democrats engage in any shenanigans like they did in the House process.

The revelation comes after the House finally late last week formally sent the Articles of Impeachment it adopted before Christmas—after holding them for more than a month without transmission—to the U.S. Senate thereby triggering the start of a Senate trial. The Senate will formally commence its trial procedures in votes this coming week, and while some Republicans want to outright dismiss the charges altogether from the outset others believe a trial should take place.

In so finally transmitting the Articles of Impeachment to the Senate, House Speaker Nancy Pelosi also named impeachment case managers—the Democrats who will present and manage the House’s case to the Senate—last week too. They include House Intelligence Committee chairman Rep. Adam Schiff (D-CA) and House Judiciary Committee chairman Rep. Jerry Nadler (D-NY). Both Schiff and Nadler were widely panned for the highly unfair process they ran in the House of Representatives, and many Senate Republicans do not trust them to refrain from playing games that seek to make the Senate trial unfair to the president as the highly partisan process in the House ended up.

Republicans on the House side, who were essentially powerless to stop the Democrats’ shenanigans there since they are in the minority in the lower chamber, are warning Senate Republicans to be on the lookout for Schiff’s gamesmanship and that from his ilk.

“It’s incumbent upon the Senate to preserve the right of the President’s legal team to ask for a verdict or move to dismiss this sham impeachment anytime they see fit during the Senate trial,” a source close to House GOP leadership told Breitbart News. “Otherwise, Mitch McConnell and Senate Republicans risk allowing Adam Schiff and his conspiracy caucus to hijack and take control of the trial.”

Senate GOP leaders, including Sen. Roy Blunt (R-MO)—the conference chair—say there are not yet enough votes to dismiss the charges altogether from the outset. But Sen. Josh Hawley (R-MO), a freshman senator who’s emerged as a top ally of the president and had previously drafted a measure dismissing the charges if the House did not formally transmit them by changing Senate rules to do so, has said that the rules package for the impeachment trial includes a measure that allows for the president’s legal team to quickly push for a summary judgment or dismissal at any time should things get wild.

Hawley’s original measure that would have dismissed the charges altogether before the House formally transmitted them to the Senate by changing Senate rules was co-sponsored by several GOP senators including McConnell—the GOP leader—and thereby forced Pelosi’s hand, making her finally transmit the Articles after holding them up for a month.

But now that the Articles of Impeachment are in the hands of the Senate, it’s up to the upper chamber of Congress to figure out what to do next. A quick and dirty dismissal of the charges might play into Democrats’ messaging that Republicans are trying to cover something up, and several vulnerable Republicans in battleground states up for re-election this year like Sen. Susan Collins (R-ME) have made clear they want some kind of a semblance of a fair trial. There are also disagreements in some places on what to do regarding witnesses or new evidence, or whether to even consider such things—all sorts of wrinkles that will likely be ironed out this week and next.

But one thing is clear: Hawley’s confirmation, first reported by Axios, that McConnell’s rules package at least as of now includes that motion to dismiss or seek a verdict would allow the president’s team to block any Democrat gamesmanship in the Senate trial.

“I am familiar with the resolution as it stood a day or two ago,” Hawley told Axios’ Jonathan Swan on Saturday. ”My understanding is that the resolution will give the president’s team the option to either move to judgment or to move to dismiss at a meaningful time.”

Hawley further confirmed this on Sunday, tweeting out a link to Swan’s piece and commenting that Trump’s legal team deserves this option otherwise the “trial will become endless circus run by Adam Schiff.”

.@realDonaldTrump deserves the right during Senate trial to ask for a verdict or move to dismiss – otherwise trial will become endless circus run by Adam Schiff https://t.co/JsUXsnhYTI

In other words, the big picture here is that it seems as though the Senate will move forward with an actual trial—details on a number of fronts on that as of yet to be determined—but that there will be one thing that is clear: If Schiff or the Democrats try anything untoward like they did in the House, the president and the Senate have the option to shut the whole thing down and blow it all up on them. That means Republicans hold the upper hand, and should things get crazy—while there are not currently enough votes to dismiss the trial or outright off the bat acquit Trump—after Democrat partisan gamesmanship there likely would be enough votes to dismiss the whole thing. Bad behavior, in a partisan way, from people like Schiff and Nadler and other Democrats could drive more Republicans toward the motion to dismiss—the kill switch—if that ever becomes necessary.

McConnell, who a losing GOP primary candidate in West Virginia once derisively nicknamed “Cocaine Mitch”—a nickname he’s since embraced as indicative of his tough persona—has a history of outsmarting Democrats in the Senate. Most notably, McConnell beat them when they tried in late 2018 to tank the Supreme Court confirmation of now Justice Brett Kavanaugh. McConnell has had many other such end-run victories around the Democrats, and sources close to him expect this Senate impeachment trial will be no different.

“My pal Cocaine Mitch is again proving his mettle when it comes to outmaneuvering leftist Democrats with this kill switch,” a source close to McConnell told Breitbart News. “If they even think about stepping out of line and being unfair in the slightest, it’s time to engage said kill switch and end this nonsense once and for all.”

A former White House official added that including this “kill switch” in the resolution gives Senate Republicans the tools they need to help McConnell keep the trial on the straight and narrow.

“McConnell has proven time and time again he is a more effective Leader than Pelosi is Speaker,” the former Trump White House official told Breitbart News. “This resolution ensures the President and his team has every tool at their disposal.”

The even bigger picture here is that when it comes to the Senate trial, GOP senators—in particular McConnell—are taking an active role in ensuring it will be fair. They are leading the way in framing this.

Vice President Mike Pence, in an exclusive interview with Breitbart News late last week, made it clear that “when it comes to the Senate trial, it’ll be for the senators to decide [on witnesses and process], but I think the fact that you hear people talking about witnesses in the Senate just proves how weak the case underpinning the Articles of Impeachment really is.”

“The fact that we’ve heard they had an open-and-shut case, that despite the fact the American people can read the transcript, see the fact the president did nothing wrong, no quid pro quo, the military aid was released,” Pence added. “The American people have the facts. We heard that Congress did what the facts demanded, and now suddenly we hear Democrats saying they need more facts and they need more witnesses. My view on this is the American people see through all of this—the sham investigation followed by a partisan impeachment. They’re saying ‘enough is enough.’”