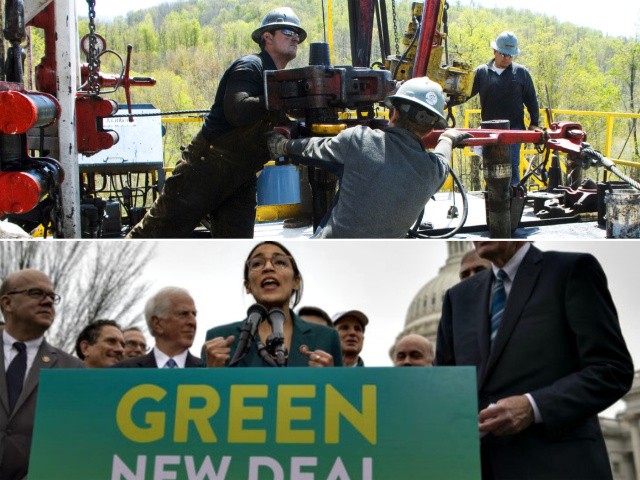 Oil and gas rigs have been popping up all across Colorado in recent years, as have jobs working the rigs.

Colorado’s total oil production is valued at more than $9.9 billion for 2018—an estimated 62 percent higher than 2017, according to the University of Colorado Boulder’s most recent study of the state’s economy. The value of the state’s natural gas production in 2018 was estimated at $5.3 billion.

Employment in the Colorado oil and gas industry has grown by more than 23 percent since 2016, now accounting for around 25,700 jobs. This year it is expected to grow another 4.8 percent.

But now, the Green New Deal, proposed Thursday by Rep. Alexandria Ocasio-Cortez (D-NY) and Sen. Ed Markey (D-MA), is threatening the state’s energy boom. The plan calls for the U.S. to completely abandon the use of fossil fuels over the next ten years.

That would not just derail Colorado’s natural resource and mining sector but also the many businesses and jobs that have grown up to serve the energy boom.

Across the United States, the Green New Deal could threaten such extreme economic disruption that it could put into play states once considered safe for Democrats. That is especially true of Colorado, which accounts for almost 5 percent of the total crude oil produced in the United States and has far more to lose from the Green New Deal than places like New York and Massachusetts.

In 2016, Hillary Clinton won 48.1 percent of Colorado’s votes. Donald Trump won just 43.1 percent. Libertarian candidate Gary Johnson took 5.1 percent. A Democrat candidate who embraced a plan that would certainly eliminate 25,000 oil and gas extraction jobs and likely another untold number of jobs indirectly related to the sector could create a political, as well as an economic, earthquake.

Of course, the Green New Deal would also create jobs, according to its proponents. But while Colorado’s oil and natural gas jobs cannot be located outside of the state, there is no guarantee the new green jobs would be created there. Making matters worse, wind and solar energy farms can be operated with a far thinner workforce, which means that even if the Green New Deal’s new energy were produced in Colorado, it would employ far fewer workers.

Sen. Michael Bennet (D-CO) is reportedly considering a presidential bid. This puts him in a political bind: support the Green New Deal program popular with the base of the national party or stand by his state’s economic interest. His office did not respond to a request for comment.

Although natural resource drilling and mining employ just 1 percent of the Colorado workforce, the sector pulls above its weight calls in economic impact because the jobs generate some of the highest per worker income levels in the state. Average pay in the sector is 146 percent of the state average.

The damage will go beyond just oil and natural gas. Coal jobs too would be killed off. According to a 2015 National Mining Association survey, the coal industry contributed $1.9 billion to Colorado’s economy and directly employed 3,723 workers, plus 12,977 indirect and induced jobs.

In the United States, factories that produce equipment for mining and drilling have boomed in recent years on the backs of the technological innovations that have made the U.S. one of the world’s largest energy producers. These factories and the investments in them would go to waste in a Green New Deal that made fossil fuels obsolete or illegal.

Investment in Colorado’s traditional energy sector would dry up. Whether investors burned by a government that turned against fossil fuels would willingly support investment in Green-New-Deal-favored energy projects is a risk—and certainly a risk for Colorado’s economy.

Ocasio-Cortez portrays the Green New Deal as offering Americans a tremendous opportunity. And no doubt a new national program of green investment, subsidized by cheap government financing, would create many new wealthy entrepreneurs. But it also threatens jobs that Americans already have and depend upon for their livelihoods.

Colorado, because it has such a high concentration of good jobs extracting fossil fuels, is one of the states that would be hit the hardest.