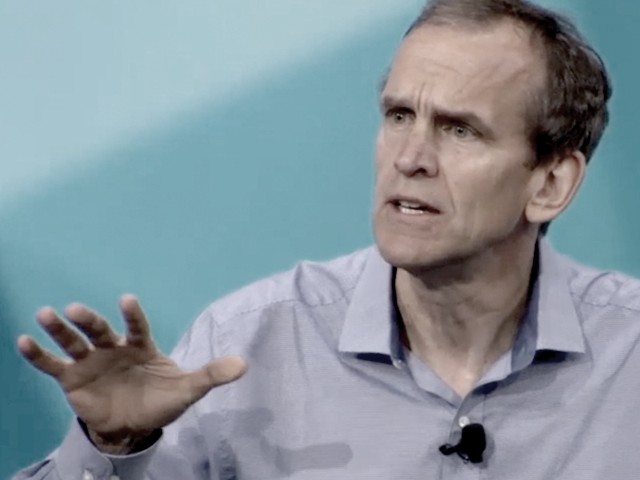 Speaking to Google employees a few days after the 2016 election, Google VP for Global Affairs Kent Walker assured the company that despite Trump’s election, history was “on [their] side” but that they must work to ensure that “populism [and] nationalism” around the world is nothing more than a “blip” and a “hiccup” in the march towards progress.

The comments were brought to light in a video leaked exclusively to Breitbart News by an anonymous source. The video is a full recording of Google’s first all-hands meeting following the 2016 election, featuring Walker, CEO Sundar Pichai, co-founders Sergey Brin and Larry Page, and several other Google executives. It can be watched in full below.

“If you’re in Pennsylvania or Birmingham, you may not care that somebody in Dehli is getting a new job or that somebody in Jakarta is getting better healthcare. You care about what’s happening to you and your family. And you’re seeing this sense of stagnation, that you’re not better off than your parents, and you’re afraid that your kids may not be better off than you are, and what’s the path forward?”

“And the forces out there seem well beyond you; globalization, immigration, trade … And you’re afraid, and you’re trying to look for answers. And that fear, I think, not just in the United States but around the world is what’s fueling concerns – xenophobia, hatred, and a desire for answers that may or may not be there.”

“We’re trying to figure out, how do we respond to that, what are the next steps for us before the world comes into this environment of tribalism that’s self-destructive [in] the long-term.”

“And yet, we do think that history is on our side in a profound and important way … the moral arc of history is long but it bends towards progress.”

Walker went on to approvingly quote then Prime Minister Matteo Renzi of Italy (recently defeated by a populist coalition).

“While it may be that the internet and globalization were part of the cause of this problem, we are also fundamentally an essential part of the solution to this problem.”

“Google is a trusted source of information for people around the world. That’s incredibly valuable at times like this” Walker says, later.

Walker also responds to an employee question about “this election and others around the world” being a “hiccup in history’s arc towards progress” what whether it’s part of “the same arc that has included two World Wars.”

“History teaches us that there are periods of populism, of nationalism that rise up, and that’s all the reason we need to be in the arena.” says Walker “That’s why we have to work so hard to ensure that it doesn’t turn into a World War or something catastrophic, but instead is a blip, is a hiccup.”

Update — After Breitbart News published this article, a Google spokesperson replied to a request for comment with the following statement:

“At a regularly scheduled all hands meeting, some Google employees and executives expressed their own personal views in the aftermath of a long and divisive election season. For over 20 years, everyone at Google has been able to freely express their opinions at these meetings. Nothing was said at that meeting, or any other meeting, to suggest that any political bias ever influences the way we build or operate our products. To the contrary, our products are built for everyone, and we design them with extraordinary care to be a trustworthy source of information for everyone, without regard to political viewpoint.”