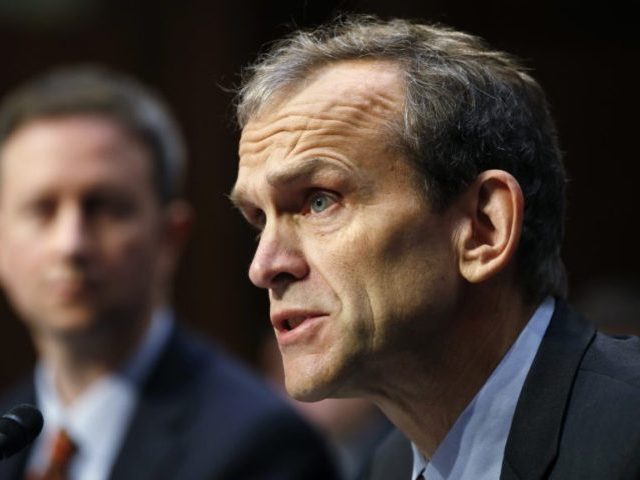 Google’s Vice President for Global Affairs and Chief Legal Officer, Kent Walker, made a number of newsworthy comments during the leaked video of a Google all-hands “TGIF” meeting shortly after President Trump’s 2016 victory, which was released by Breitbart Tech this week.

Walker: “Globalization” is an “incredible force of good,” and “We’re trying to figure out what our right next steps are” in response to “rising tide of nationalism, populism.”

“It’s not just a challenge for America… This is not the first sign we’ve seen of this rising tide of nationalism, populism, and concern. There are drivers of globalization and immigration which have sparked movements throughout Europe, throughout Asia, throughout Latin America,” Walker declared. “You see not just Brexit, but rising new parties are coming on to the scene splintering the traditional parties. We’ve seen it through Germany, France, Italy has a referendum next month, the Philippines, Thailand, big chunks of Latin America.”

“We’re trying to figure out what our right next steps are in that, but we recognize that globalization and the Internet have been an incredible force for change. They have brought hundreds of millions of people out of extreme poverty around the world. Incredible force for good,” he continued. “But all politics is local goes the old phrase, and if you’re in Pennsylvania or Birmingham, you may not care that somebody in Delhi is getting a new job, or that somebody in Jakarta is getting better health care. You care about what’s happening to you and your family.”

Google has more than 10,000 employees in the U.S. on H-1B visas, the company is dedicated to globalism.

Walker: “Fear… xenophobia, hatred” is responsible for “self-destructive” populist victories around the world, such as President Trump’s 2016 presidential victory.

“The forces out there seem well beyond you; globalization, immigration, trade … And you’re afraid, and you’re trying to look for answers. And that fear, I think, not just in the United States but around the world is what’s fueling concerns – xenophobia, hatred, and a desire for answers that may or may not be there,” expressed Walker. “We’re trying to figure out, how do we respond to that, what are the next steps for us before the world comes into this environment of tribalism that’s self-destructive [in] the long-term.”

Walker: “History is on our side,” “globalization” is an “essential part of the solution to this problem,” and the “moral arc of history bends towards progress.”

“We do think that history is on our side in a profound and important way … the moral arc of history is long but it bends towards progress,” Walker claimed. “While it may be that the Internet and globalization were part of the cause of this problem, we are also fundamentally an essential part of the solution to this problem.”

Walker: “Google is a trusted source of information for people around the world,” which is “incredibly valuable” during the rise of “populism” and “nationalism,” which could be turned into “a blip” or a “hiccup.”

“Google is a trusted source of information for people around the world. That’s incredibly valuable at times like this,” Walker proclaimed, seemingly referencing the rise of populism and nationalism. “History teaches us that there are periods of populism, of nationalism that rise up, and that’s all the reason we need to be in the arena… That’s why we have to work so hard to ensure that it doesn’t turn into a World War or something catastrophic, but instead is a blip, is a hiccup.”

Walker accidentally makes FCC Chairman Ajit Pai’s point about net neutrality being unnecessary.
“On net neutrality, we are hoping that the tradition we have established over the last ten maybe twenty years of no improper interference in the flow of data takes on a life of its own after its own after a period of time and it forces the public opinion and makes it harder and harder for carriers to improperly interfere in what people are able to see,” Walker expressed.