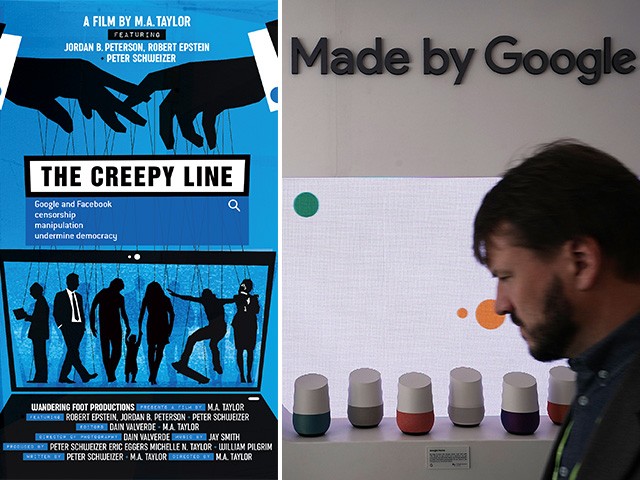 The new documentary The Creepy Line explores how the Masters of the Universe in Silicon Valley can utilize their platforms to suppress speech and undermine democracy — a topic of vital importance for elections in 2018, 2020, and beyond.

The Creepy Line is a new feature-length documentary that explores how Silicon Valley tech companies can use their vast influence to crack down on speech and undermine democracy. The film focuses specifically on Facebook and Google, and analyzes exactly what these companies do once they have unlimited access to user’s data. The film uses first-hand accounts, scientific experiments, and detailed analysis to explore the risks of allowing these two tech giants free reign over the personal information of millions of people.

The title of the documentary is lifted directly from the words of former Google CEO Eric Schmidt, when during an interview in 2010 he explained Google’s code of conduct: “The Google policy on a lot of things is to get right up to the creepy line and not cross it.”

The new feature-length documentary is directed by M.A. Taylor and features interviews with prominent figures such as Dr. Jordan Peterson, Dr. Robert Epstein of the American Institute for Behavioral Research and Technology and Peter Schweizer, President of the Government Accountability Institute and author of Clinton Cash.

Breitbart News has reported extensively on the work of Dr. Robert Epstein and his analysis of large tech firms. One of Epstein’s reports has claimed that by returning negative search suggestions when searching the name of a political candidate, search engines like Google can shift the opinions of undecided voters by up to 43.4 percent. Speaking at a Breitbart News Town Hall, Epstein noted that Google could shift election results without anyone even realizing:

“We estimated that if these companies were all working together and supporting the same candidate, and really pulling out all the stops and using all the methods they have to manipulate, they could shift 10 percent of the voting population of America, with no-one knowing that they had done this, and without leaving a paper trail for authorities to track,” he stated. “10 percent could be shifted — that’s a lot of votes, with no-one knowing that they’ve done this.”

Peter Schweizer, who is also featured in The Creepy Line also stated during a Breitbart News Town Hall that tech firms have a huge influence over the direction of national debate: “They have enormous powers, powers that I would argue that company has ever had in human history over the flow of information,” he said. “They are not just Internet companies. They are media companies, they are opinion companies, and they steer the national debate in ways that are unimaginable.”

In recent months, Breitbart News has received a number of exclusive looks inside Google and their blatant displays of political partisanship. Breitbart News Senior Tech Reporter Allum Bokhari revealed a leaked video from inside a Google TGIF meeting recorded after the election of President Trump in 2016 in which Google staff and executives express their dismay and horror at the election of Trump.

In another exclusively leaked internal company briefing produced by Google, the company claims that for a number of reasons including the election of President Trump, the concept of “free speech” is no longer a viable or realistic goal, describing it as “utopian.” Bokhari writes:

Despite leaked video footage showing top executives declaring their intention to ensure that the rise of Trump and the populist movement is just a “blip” in history, Google has repeatedly denied that the political bias of its employees filter into its products.

But the 85-page briefing, titled “The Good Censor,” admits that Google and other tech platforms now “control the majority of online conversations” and have undertaken a “shift towards censorship” in response to unwelcome political events around the world.

The Creepy Line explores the measurable impact the Masters of the Universe have had on elections. Google, Facebook, and the other companies that control social media are continuing to apply more pressure on voters in support of their favored candidates and ideologies after they failed to elect Hillary Clinton in 2016. The Creepy Line is an important examination of just how important the battle for free speech online has become.

The Creepy Line documentary can be rented or purchased on iTunes and is also available through Amazon Prime.