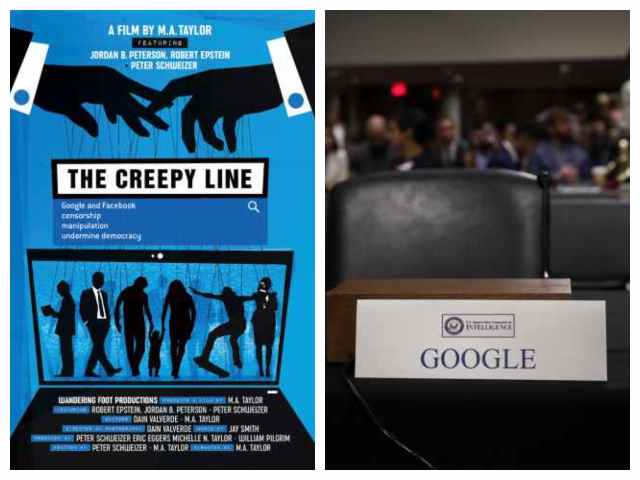 Breitbart Tech Senior Reporter Allum Bokhari interviewed M.A. Taylor, the director of The Creepy Line — a documentary which reveals “the stunning degree to which society is manipulated by Google and Facebook.” During the interview, Taylor explained how Google resembles a “totalitarian government” more than a private company.

“We all have our own values. We live in a free society. What gives a private company the right to push their values on us, to force their values on us? That sounds like a totalitarian government to me” said Taylor. “That’s more terrifying than any other kind of anti-trust scenario in the last hundred years [like] Standard Oil, and those guys. This is pushing us as a society and humanity in certain directions.”

In a follow-up discussion with Breitbart News, Taylor responded to “The Good Censor,” a leaked internal Google presentation in which the company admitted that they and other tech giants were moving away from free speech, despite monopolizing the majority of online conversations.

“I wasn’t surprised at all, really,” said Taylor. “The document proved that we weren’t even as harsh as we should have been in some instances. We were kind of lightweight in our approach.”

Taylor also described an eerie atmosphere of silence around The Creepy Line, criticizing the D.C. conservative establishment for sucking up to Google.

“We’ve had blowback on this stuff from the left obviously but also from the right… We couldn’t even get a screening at Heritage [Foundation].”

“They have a very large lobbying presence, they partner with a lot of people, I extend this to Facebook as well. They partner with groups that are analyzing work that Google does, and their message is ‘oh, we’re here to help,’ but I think it’s also to counter criticism like ours.”

Taylor also commented on the lack of scrutiny that Google has received from legislators compared to Facebook, whose CEO and COO have both appeared before Senate committees in the past year. Google, despite suffering a major undisclosed data breach that resulted in the shutdown of Google Plus, will not be sending its CEO to Capitol Hill until after the midterms.

“I think the fact that nobody is upset is concerning” said Taylor. “Google has made efforts on the hill, and no-one wants to disrupt them. All of their data sits on servers that are run by Google, and I think the people who would consider disrupting them know that Google has the ability to push back.”

“You’ll see these guys in Congress saying ‘there’s absolutely no proof that Google does anything’ and I’m like ‘really? you really believe it’ And then you go through and see that Google donated to their campaign.”

Taylor suggested that the D.C. establishment’s wariness of taking on Google extends to his own film, which Taylor says is receiving the silent treatment.

“We’ve tried to get the film shown in certain places, they just won’t touch it. And it’s not even a partisan film. [Dr. Robert] Epstein’s voted for Democrats, Luther Lowe’s a Democrat. This is bad for everybody in this country whether they’re Democrat or Republican. It’s very concerning that there’s a movement in Washington to protect these guys.”

The Creepy Line documentary can be rented or purchased on iTunes and is also available through Amazon Prime.