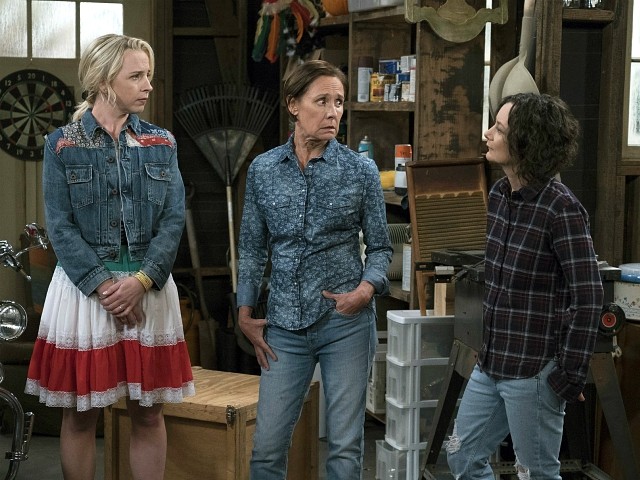 NEW YORK (AP) — Can there be a “Roseanne” without Roseanne? The answer is yes, indeed. There can even be a pretty good sitcom. And you might not miss her that much.

ABC on Tuesday night aired the first episode of “The Conners,” a spinoff of “Roseanne” without Roseanne Barr. An overdose of pain pills may be the explanation for the contentious comedian’s absence from the Conner dining table, but she still haunts it, at least in the new show’s pilot.

The writers — Bruce Helford, Bruce Rasmussen and Dave Caplan — have done an absolutely masterful job of tackling a post-Barr world, confronting sadness, cynicism and hopefulness in just the right amount of proportions.

They’ve accomplished that without the main reason people once tuned in. Barr was the show’s gravitational pull, the hurler of barbs in that accusatory, whiny voice. Leaving her behind is akin to taking Neil Patrick Harris out of “How I Met Your Mother” or airing “Star Trek” without William Shatner.

But in the absence of Barr’s acerbic black hole, the trio of Dan Goodman, Laurie Metcalf and Sara Gilbert raises its acting games, turning the first episode into something like a one-act play, albeit a comedy written by Arthur Miller.

The pilot begins three weeks after Roseanne’s funeral, with the family still coming to grips with its loss in its own trademark way with off-color barbs. “I’m tired of crying. And laughing inappropriately is what mom taught us to do,” Lecy Goranson’s Becky says. When husband Dan is offered a free sympathy beer at a bar, he successfully upgrades it from domestic to German.

Goodman has never been better, showing his tender and angry sides underneath all that bluster and gruff, while an aching Gilbert tears up at one point, freed from her usual rat-a-tat joke demands. And you can feel Metcalf’s yawning grief at the loss of her sister in a visceral way as she goes on a manic cleaning binge. “I don’t want to go home. I don’t want to leave this house because I don’t want to leave her,” she wails.

We learn that Roseanne had multiple pain-pill suppliers and was stashing stockpiles all over the house. “Who am I supposed to be mad at now?” Dan asks. For his part, Dan also starts to deal with his uncomfortableness with homosexuality, in the end sitting down with his gender non-conforming grandson to help him pick a potential boyfriend.

One thing noticeably absent from the first episode: politics. There’s no Trump, no Hillary, no Washington. The fission of red state-versus-blue state infighting that made the reboot of “Roseanne” such a flashpoint is gone. Viewers are left with a blue-collar family worried about bill collectors and military deployments.

Barr’s absence makes sense since her addiction to opioids was a prominent story line in last season’s reboot. ABC fired Barr from “Roseanne” after she posted a racist tweet (she apologized). Barr said she agreed to the spinoff to save the jobs of 200 cast and crew members who were idled when “Roseanne” was canceled.

“Roseanne” was always masterful at quickly popping its own moments of emotional sweetness with a wry, sardonic needle, basically and gleefully mocking the traditional sitcom formula. Thankfully, “The Conners” stays in that tradition.

When Jackie, who in one scene is putting away kitchen tools, tearfully hugs Darlene in the kitchen, the younger woman admits: “It hurts.” Jackie responds: “I know, hon. It’s going to hurt for quite a while.”

“No,” replies Darlene, “Corn holders in my shoulder.”

The first episode artfully mixes boob jokes and poignant scenes, as when Dan silently hugs the empty space in the bed where his wife once lay. The swirling credits and harmonica theme song that plays when family members gather around the kitchen table now comes at the end, and without Barr’s throaty laugh.

The cast seems to reference the elephant in the room when Dan and Darlene toast Roseanne’s stubbornness. “She was gonna to do what she was gonna do,” Goodman says. “She never listened to a damn person in her life.”

With her polarizing presence gone, we can finally listen to the rest of the family. And maybe we might, one day, ask, “Roseanne, who?”