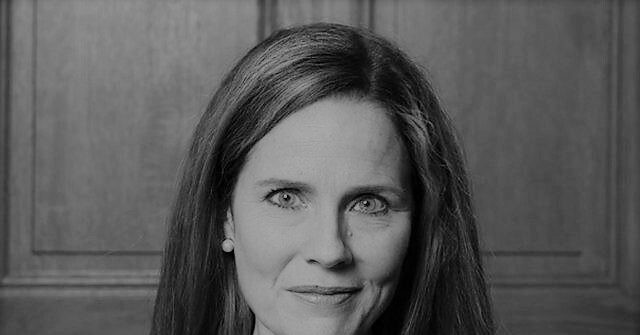 The following article is sponsored by the Judicial Crisis Network and authored by Mallory Quigley.

“We did it.” Today Judge Amy Coney Barrett advanced one step closer to confirmation as the next U.S. Supreme Court justice. It’s a turning point in the battle to protect unborn children and their mothers, and another key promise made, promise kept by President Trump.

Judge Barrett is an inspiration and a role model for women and girls everywhere. As a young woman who has dedicated my career to ending the injustice of abortion, this moment holds particular significance. I know what it’s like to be demeaned by the abortion lobby – that’s if they acknowledge the existence of pro-life women at all. Many of my colleagues at Susan B. Anthony List, also young women, can relate.

Thanks to President Trump and the pro-life Senate, millions of pro-life women nationwide at last are seen and heard at the highest echelons. As Judiciary Chairman Lindsey Graham (R-SC) put it, Barrett hasn’t only “punch[ed] through a glass ceiling, but a reinforced concrete barrier.” Or as Senator Joni Ernst (R-IA) wrote, “We don’t have to choose a narrow definition of womanhood … Amy Coney Barrett truly shows what a mom can do.”

Judge Barrett is a superstar in the legal world, a beloved and distinguished law professor, and before President Trump nominated her to the high court, a diligent and upstanding judge on the 7th Circuit. She has done all this while raising seven beautiful children, who she considers the greatest possible accomplishment. Her life is proof that women don’t need abortion to succeed in the world.

Barrett draws praise even from those who totally disagree with her judicial philosophy. The late Justice Ginsburg’s clerks agreed she is “a woman of remarkable intellect and character,” while Harvard professor Noah Feldman says she’s “a brilliant lawyer, a genuine and good person.”

Everyone should be able to celebrate her achievement, especially those who call themselves feminists; but pro-abortion Democrats and their media allies just can’t help fearmongering and showing their hypocrisy.

Besides grilling Judge Barrett about her pro-life views and suggesting, inexplicably, that her appointment will lead to discrimination against working women, they’ve attacked her Catholic faith and questioned her motives for adopting her children. Without the slightest basis, sitting Democratic senators even asked whether she is a white supremacist or is guilty of sexual assault.

The motivation behind Democrats’ outrageous attacks is clear. For decades, the courts have been their favorite blunt tool for overriding the will of the people and imposing abortion on demand through birth, paid for by taxpayers – and they’re terrified of losing it.

Yet there’s evidence their strategy is backfiring. According to Gallup, 51 percent of Americans now want to see Barrett confirmed.

They’ve watched her disarm every trap set for her. With a calm demeanor and firm, graceful replies, she has consistently reiterated the duty of a judge to not prejudge cases and to put aside personal beliefs in applying the law. They can see past the caricatures to the truth – and the more they get to know her, the more obvious it is that she possesses exceptional qualifications.

Although Barrett’s confirmation appears virtually assured, pro-life Senate Republicans must remain vigilant – not only to get her across the finish line next week, but to ensure that the very structure of government is not remade by pro-abortion Democrats.

Democratic Party leaders have threatened to eliminate the filibuster and even expand the number of justices on the Court – a drastic move that two out of three voters oppose, a new poll conducted by Marist and made public today by Susan B. Anthony List finds.

After flippantly telling voters that “You’ll find out after I’m elected” where he stands on court packing, Joe Biden now says he favors putting together a commission to research the issue. Make no mistake: Joe Biden and Kamala Harris would do the bidding of the radical abortion lobby – appointing activist judges to permanently enshrine abortion on demand without any limits whatsoever.

The contrast to President Trump, who has done everything in his power to protect the unborn, is stark. This November, life and death are on the ballot.

The stakes couldn’t be higher or the choice clearer. President Trump made an outstanding pick when he nominated Judge Barrett. He and pro-life Senate Republicans, without whom this victory would not be possible, are the ones who are truly fighting for women and children, and they deserve every pro-life voter’s support.

Mallory Quigley is national spokeswoman for the pro-life group Susan B. Anthony List and its partner, Women Speak Out PAC.