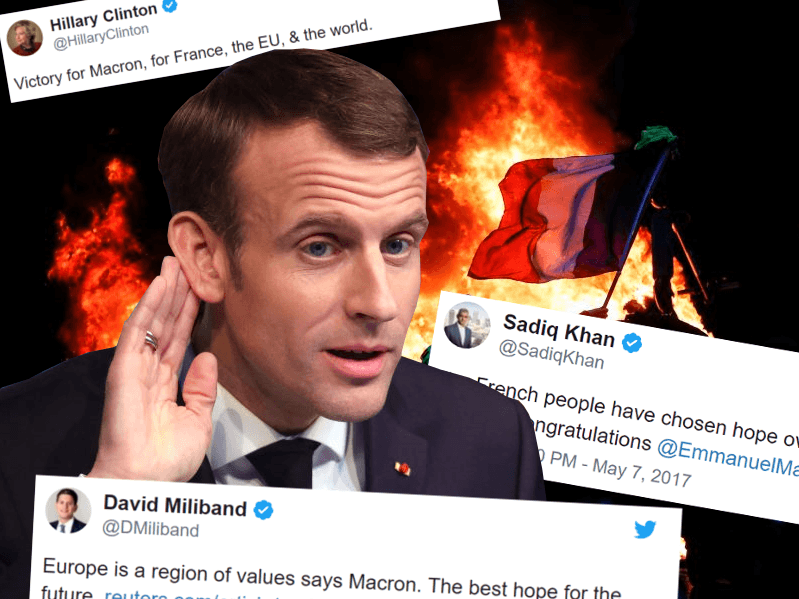 With France brought to its knees by the country’s worst unrest in half a century, as citizens protested Emmanuel Macron, there will be increasing concern amongst the globalist establishment over the future of the French president they hailed as the saviour of Europe.

Reports have showed a country in chaos over the past three weeks, with hundreds of people wounded and a number killed in anti-government protests which, despite disruption and violence, enjoy wide support from a large majority of the population.

Against so-called green taxes and a major squeeze in French workers’ cost of living, the Yellow Jackets movement represents “a rejection of all things Macron”, admitted the liberal U.S. magazine Slate this week.

The French people have chosen hope over fear and unity over division. Congratulations @EmmanuelMacron. #FrenchElection pic.twitter.com/zSNRaEdPRE

But since he came to power last May, globalists around the world said the French president’s rise marked a political ‘new dawn’ against “division” and “hate”, with many insisting his brand of “radical centrism” was a formula that should be imposed on their own nations.

Victory for Macron, for France, the EU, & the world.

Defeat to those interfering w/democracy. (But the media says I can’t talk about that)

Macron won by rising above the petty tribalism of the main parties and appealing to a desire to get things done. Me on @BBCNewsnight: pic.twitter.com/nH1kaABMCi

This sentiment has been particularly prevalent amongst Britain’s pro-EU elite, with Liberal Democrats leader Vince Cable — who previously attacked Brexit as the result of elderly voters’ ‘white nostalgia’, and likened ‘church hall-dwelling’ Leave voters to “jihadis” — telling UK voters his party could “offer the same formula as Macron”.

Vince Cable: I can offer the same formula as Macron https://t.co/Pa2OOGirr3

Macron is charismatic, smart and ballsy. Can we borrow him?

After writing several articles lavishing praise on the French premier, Alastair Campbell — who served as Iraq war architect Tony Blair’s spin doctor under the former prime minister’s Labour regime — has been uncharacteristically quiet since the start of France’s developing crisis, tweeting recently only to comment that Macron “has a very large brain”.

My piece @IBTimesUK on what May could learn from Merkel and Macron https://t.co/Z5BGVm6Ext

To defeat populism, America needs its own Macron–a charismatic leader who can make centrism cool. My take: https://t.co/AAF1YwTnqb

Particularly laudable, according to Campbell, was Macron’s vow to slash carbon emissions through the same ‘green’ agenda which has driven French workers onto the streets in recent weeks to protest the rising cost-of-living and massive fuel tax hikes.

Unsurprisingly, another arch-Remainer who has revealed herself to be in awe of Macron is Anna Soubry, the Tory former defence minister who says opponents of mass migration are “ignorant” and “racist”, and who told an audience of Muslims that the UK “would be a better country” if “white British people … learned more from your community”.

Just in case you missed it ….”There’s never been a better time for a British Macron” https://t.co/2RvQ6RbHmr

Just in October, when the French leader’s fast-sinking approval rating was well on its way to this month’s record low of 23 per cent, the reportedly deeply unpopular Broxtowe MP tweeted “there’s never been a better time for a British Macron” in a post which linked to an article alleging that a neoliberal, ‘social justice’-pursuing political force led by a globalist figure such as “Ruth Davidson, David Miliband [or] Chuka Ummuna (sic)” would “do rather well” at the ballot box.

Miliband returning to UK politics to lead the country as a ‘British Macron’ seems to be a major hope among many in the Europhile elite, after the former foreign secretary fueled rumours of a comeback in recent months, campaigning against Brexit.

The failed Labour leadership candidate moved to New York in 2013 to take the helm at the International Rescue Committee (IRC), a George Soros-backed NGO which works to transfer refugee populations to Western nations.

Europe is a region of values says Macron. The best hope for the future. https://t.co/JZMrLnfGe5

Macron is Europe’s “best hope for the future”, Miliband tweeted last year, linking to a Reuters article reporting the then-newly elected leader of France had declared that Poland must not be allowed to “define the Europe of tomorrow” after the eastern EU state’s pro-sovereignty government rejected orders from Brussels to welcome illegal immigrants from the third world.

Another Miliband tweet praising Macron’s pro-mass migration politics approvingly paraphrased Soros, who said that the continuing illegal entry of millions of migrants to European shores must become “the new normal”.

‘Migration crisis is not a crisis, it’s a challenge that will be here for a long time’ -Macron. EU cooperation key to addressing new normal.

Macron’s assertion that Europe is entering an “unprecedented” age of mass migration, in which absorbing as many as hundreds of millions of Africans is the bloc’s destiny, somewhat conflicts with the leader’s claim it would be necessary to enact punishing ‘green’ taxes on French workers to ‘wean’ the country off fossil fuels to stop global warming.

Given the president’s insistence that hit his countrymen should be hit in the pocket with fuel tax rises in order to lower emissions, it is unclear why he advocates a policy which would vastly increase global CO2 output through transferring populations from low-polluting parts of the world to rich nations where residents have a far higher carbon footprint.