The American Left has come to characterize the pilgrims who arrived in Plymouth, Massachusetts in 1620 as the first immigrants of the nation, though they were settlers, for the purpose of justifying immigration maximalism.

In historian Samuel Huntington’s 2004 book Who Are We?: The Challenges to America’s National Identity, the political scientist correctly writes that the American nation’s founding began with settlers, not immigrants, as John O’Sullivan notes for the Claremont Institute:

As the late Samuel Huntington pointed out in his magisterial Who Are We?: The Challenges to America’s National Identity (2004), America is a nation of settlers and assimilated ex-immigrants. And what the immigrants assimilated to was the culture, institutions, language, and public memories of the original settlers. To be sure, the immigrants enriched the national identity of these first Americans but not to the extent of transforming it into a different identity. Huntington’s metaphor was that of a tomato soup that became a more delicious concoction when you added spices, garlic, basil, and chopped onions but that was still recognizably tomato soup. [Emphasis added]

Professor Charles Kesler’s 2005 essay for the Claremont Institute similarly examined Huntington’s Who Are We?, writing that the nation has undergone an “identity crisis,” though the country’s founding is rooted in Anglo-Protestantism, the culture of the settlers:

Though not inevitable, the disorder that [Huntington] discerns is fueled by at least three developments in the culture. The first is multiculturalism, which saps and undermines serious efforts at civic education. The second is “transnationalism,” which features self-proclaimed citizens of the world—leftist intellectuals like Martha Nussbaum and Amy Guttman, as well as the Davos set of multinational executives, NGOs, and global bureaucrats—who affect a point of view that is above this nation or any nation. Third is what Huntington terms the “Hispanization of America,” due to the dominance among recent immigrants of a single non-English language which threatens to turn America, in his words, into “a bilingual, bicultural society,” not unlike Canada. This threat is worsened by the nearness of the lands from which these Spanish-speaking immigrants come, which reinforces their original nationality. [Emphasis added]

Standing athwart these trends are the historic sources of American national identity, which Huntington describes as race, ethnicity, ideology, and culture. Race and ethnicity have, of course, largely been discarded in the past half century, a development he welcomes. By ideology, he means the principles of the Declaration of Independence, namely, individual rights and government by consent, which he calls the American “creed” (a term popularized by Gunnar Myrdal). [Emphasis added]

These principles are universal in the sense that they are meant to be, in Abraham Lincoln’s words, “applicable to all men at all times.” Culture is harder to define, but Huntington emphasizes language and religion, along with (a distant third) some inherited English notions of liberty. Who Are We? is at bottom a defense of this culture, which he calls Anglo-Protestantism, as the dominant strain of national identity. Although he never eschews the creed, he regards it fundamentally as the offshoot of a particular cultural moment: “The Creed…was the product of the distinct Anglo-Protestant culture of the founding settlers of America in the seventeenth and eighteenth centuries.” [Emphasis added]

That American national identity dating back to the nation’s settlers has in recent times come under revisionism by leftist pundits for the purpose of justifying the country’s current mass legal immigration levels where more than 1.5 million immigrants arrive in the country every year.

“The Pilgrims were the first immigrants,” Pecoraro said. “We’re in a place in this country where we need solidarity. We need to come together. We need to be talking about immigration and indigenous people.”

The left-leaning blog the Daily Beast in 2015 outright proclaimed that the pilgrims that settled in Plymouth “were the original refugees,” comparing the Puritans to Syrian nationals fleeing the Islamic State.

“[The pilgrims] were the first immigrants to come to America fleeing persecution—and their spirit of gratitude is an obligation that extends throughout the generations,” the Daily Beast‘s Michael Daly claimed. 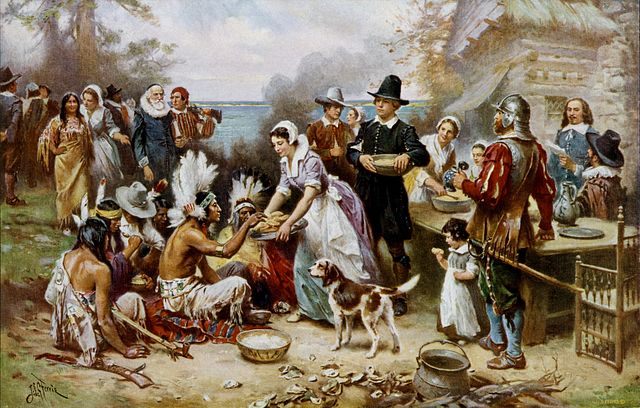 The First Thanksgiving as depicted by Jean Leon Gerome Ferris via Library of Congress.

In 2013, the Bloomberg Editorial Board called the pilgrims “the newer set of immigrants,” writing that “there were no Americans at the first Thanksgiving.” Similarly, the National Catholic Register this year calls the pilgrims at Plymouth “the first immigrants.”

This sort of characterization of the pilgrims as equivalent to the more than 10 million immigrants who have been admitted to the U.S. in the last decade has swept its way into the mainstream. Even a letter to the editor in the Washington Post refers to the pilgrims as not illegal aliens, but as “invaders.”

The subtle tactic has been welcomed and encouraged by the open borders political Left — and many in the right-of-center political establishment, think Sen. Jeff Flake (R-AZ) — as it seeks to explain current levels of legal immigration which are wildly out of the step with the views of Americans.

In 2017, the U.S. Census Bureau marked a nearly 108-year record high of immigration to the country with the foreign-born population booming to almost 14 percent, encompassing 44.5 million immigrants.

Since major changes were enacted in 1965 and in the 1990s to the U.S. legal immigration system — changes that allow foreign nationals to bring as many foreign relatives to the country as they want — legal immigration levels have continued booming for more than five decades.

This trend of nonstop, immigration maximalism is the sort of driving force that Huntington’s Who Are We? notes has contributed to the decimation of America’s national identity which the political Left has justified through the revisionist story of the pilgrims.

“‘We Americans’ face a substantive problem of national identity epitomized by the subject of this sentence. Are we a ‘we,’ one people or several? If we are a ‘we,’ what distinguishes us from the ‘thems’ who are not us? …” Huntington wrote in 2004. “These questions remain for Americans in their post-September 11 era.”