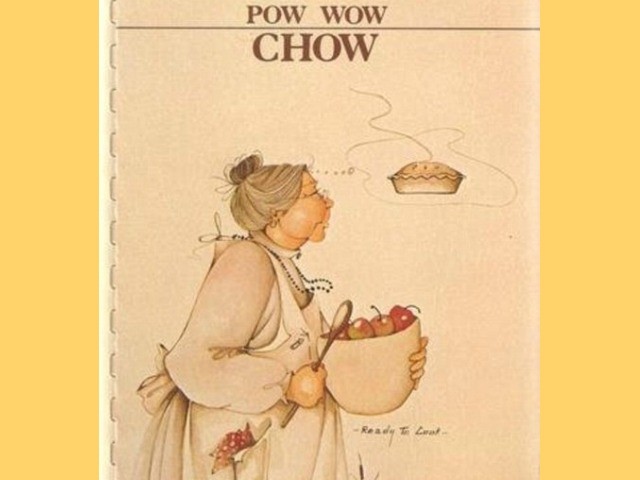 It was in this book that Sen. Elizabeth Warren (D-MA) first set forth the claim that she has Native American ancestry when she submitted several recipes using the byline “Elizabeth Warren-Cherokee.”

Warren’s culinary contributions to the Pow Wow Chow cookbook suffer from the same lack of authenticity as do her claims of Native American ancestry, as Breitbart News first reported in May 2012:

The credibility of Massachusetts Democratic  Senate candidate Elizabeth Warren took another hit today as Boston radio talk show host Howie Carr released evidence that appears to confirm Ms. Warren may have plagiarized at least three of the five recipes she submitted to the 1984 Pow Wow Chow cookbook edited by her cousin Candy Rowsey.

Two of the possibly plagiarized recipes, said in the Pow Wow Chow cookbook to have been passed down through generations of Oklahoma Native American members of the Cherokee tribe, are described in a NewYork Times News Service story as originating at Le Pavilion, a fabulously expensive French restaurant in Manhattan. The dishes were said to be particular favorites of the Duke and Duchess of Windsor and Cole Porter.

The Harvard Law School Admissions Committee that recommended Warren’s hiring to a tenured faculty position in 1993 did not rely upon her recipes when considering her academic bona fides, but they almost certainly were aware of her subsequent unsubstantiated claims in the annual Association of American Law Schools Directory, made from 1986 to 1995, that she was a minority, and her 1989 declaration to the University of Pennsylvania Law School that she was a Native American.

“So, we know one thing with almost 100% certainty: Elizabeth Warren identified herself as a minority law professor. We know something else with 90%+ certainty: (at least some) folks at Harvard were almost certainly aware that she identified as a minority law professor,” David Bernstein wrote at the Volokh Conspiracy in 2012 of Warren’s ancestry claims and how they were perceived at Harvard prior to her hiring there.

The genetic evidence which Warren set forth recently to support the claim in an October 10, 2018 report from Stanford’s Dr. Carlos Bustamante is weak to the point of derision, as Breitbart News reported:

Buried deep within the Globe story, however, is the admission that the Stanford University researcher who studied her DNA sample did not actually use samples of Native American DNA to determine whether Warren’s dubious claims of Cherokee ancestry were true.

“To make up for the dearth of Native American DNA, Bustamante used samples from Mexico, Peru, and Colombia to stand in for Native American,” the Globe reported.

At best, therefore, the DNA test results provided to Stanford University researcher Dr. Carlos Bustamante, “suggested” that Warren has between 1.56 percent and one tenth of one percent of the same DNA as people from Mexico, Peru, and Colombia, but no DNA match directly to Native American tribes in the United States, such as the Cherokee ancestry she claimed.

As Breitbart News reported, many Americans can claim such a small level of Native American ancestry, one which is far below even the minimal level required for membership in any Native American tribe, and certainly below the standard required to claim such ancestry on employment and personnel records:

23andMe, a prominent DNA testing company, reported in 2014 that ” European-Americans had genomes that were on average 98.6 percent European, .19 percent African, and .18 Native American,” according to the New York Times.

Warren’s DNA test, even if accurate, would put her genome at somewhere between 0.1 percent and 1.56 percent Native American, meaning she could be no more Native American than the average “European-American,” or even less so.

Breitbart News has sent numerous email requests for comment to Dr. Bustamante and Sen. Warren, but neither has responded.

Warren does appear to have one demonstrable heritage upon which she can draw for culinary inspiration, as Breitbart News noted in October:

Breitbart News first reported in 2012 that Sen. Elizabeth Warren’s (D-MA) great-great-great grandfather Jonathan Crawford was a member of the Tennessee Militia that rounded up Cherokees living there at the time for the Trail of Tears journey to Oklahoma in the 1830s.

As far as Breitbart News can determine, Sen. Warren’s only contributions to the culinary world have come in the form of the recipes she contributed to the 1984 Pow Wow Chow cookbook under the byline “Elizabeth Warren-Cherokee.”