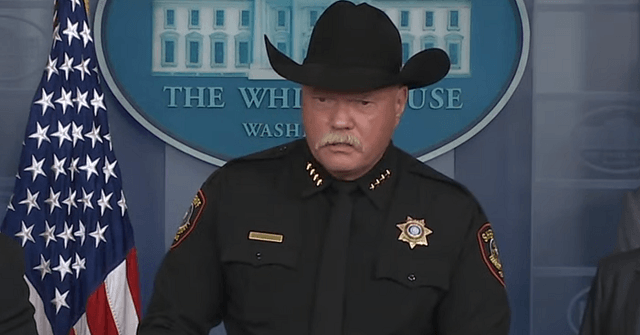 A Texas sheriff is drawing fire for comments he made in Washington, DC, earlier this week regarding repeat offender drunk drivers who are illegally present in the United States. A Texas media outlet took his comments out of context, the sheriff said. The site later issued a correction to the story.

During a press conference at the White House on Thursday, Tarrant County Sheriff Bill Waybourn spoke about the number of “illegal aliens” in his jail on drunk driving charges–including a large percentage of repeat offenders. The sheriff joined U.S. Immigration and Customs Enforcement (ICE) Acting Director Matthew Albence during a press conference regarding the latest ruling by a California federal court on immigration enforcement.

“This morning, we had 4,200 inmates,” Sheriff Waybourn said during the press conference. “Out of that, 7 percent were illegal aliens.”

“Of those people that we have in custody, we know for a fact that 72 percent of them are repeat offenders,” Waybourn said. “So if we have to turn them loose or they get released, they’re coming back to your neighborhood and my neighborhood. These drunks will run over your children and they will run over my children.”

The Texas Tribune reportedly mischaracterized the comments, making it appear he referred to all migrants as “drunks,” WFAA ABC8 reported. The Texas Tribune later corrected its article stating:

Correction: An earlier version of this story mischaracterized statements by Tarrant County Sheriff Bill E. Waybourn, who said undocumented immigrants with criminal convictions would be a threat to the public.

While the sheriff was commenting on a specific subset of individuals incarcerated in his jail, Hispanic organizations and a Texas lawmaker mounted attacks and called for the resignation of the elected lawman.

LULAC Director Domingo Garcia told WFAA, “He needs to apologize and take those words back. He accuses undocumented immigrants of being drunks who are going to run over your kids and his kids.”

Garcia continued, “When he accuses undocumented immigrants of being drunks who are going to run over your kids and his kids, it follows a dangerous rhetoric.”

Waybourn insisted he was not speaking about all migrants, but only those in his jail charged with multiple drunk driving offenses.

“I was referring to the repeat offenders that are in our jail,” the sheriff explained. “That goes for any repeat drunk offender that they’re likely to repeat it again.”

Texas State Representative Ramon Romero, Jr., (D-Fort Worth) did not appear to be satisfied.

“This isn’t something new,” Romero told WFAA. “He just did it on such a big stage he couldn’t get away with it. He should resign for his policies. He shouldn’t resign for his mouth because that’s not going to change.”

Waybourn said the Texas Tribune got his comments wrong.

“If you see the headline that says, ‘Bill Waybourn said all immigrants are drunks,’ that’s awful … but I didn’t say that,” the sheriff told the local ABC affiliate.

Texas Tribune Editor-in-Chief Emily Ramshaw responded to an inquiry from WFAA regarding the original article and said, “We made a mistake, no question about it, and we corrected it as soon as we recognized it. We regret the error.”