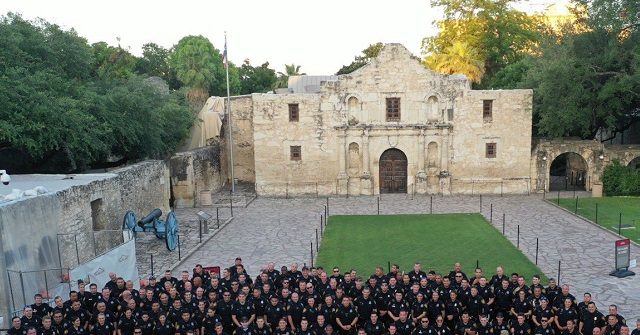 Texas Land Commissioner George P. Bush warned rioters who might be planning to target the Alamo in a tweet saying, “Don’t mess with The Alamo.” The Texas General Land Office is responsible for the care and safety of the Texas shrine.

“The Alamo is the Shrine of Texas liberty. And it will be defended,” Bush began in the tweet below. “Rest assured we have already deployed, for several weeks and will continue to do so, the Alamo Rangers in partnership with the SAPD (San Antonio Police Department, The Department of Public Safety, and the National Guard to protect this sacred site.”

“My message to protesters is simple: Don’t mess with The Alamo,” Bush concludes.

Don’t mess with the Alamo. pic.twitter.com/oqDM8wUOrT

In late May, protesters in San Antonio spray-painted graffiti on the Alamo Cenotaph. The graffiti included a downward arrow with statements of “white supremacy,” “profit over People” and “the ALAMO,” Breitbart Texas reported.

A group of Texans responded and stood guard at the Cenotaph to prevent further damage.

“Well, it’s all pretty simple.  If you’re mad that George Floyd got murdered, well good. So am I,” David Ahmad with Open Carry Texas said in a video posted on Facebook. “If you want to respond to that by burning Target, or a drug store, or looting a liquor store, or destroying the Alamo, you can kiss both sides of my ass. We’re going to put a stop to you.”

“So, just do it right. Protest the man’s death because it should be protested. Things need to change. This bullshit’s got to stop.”