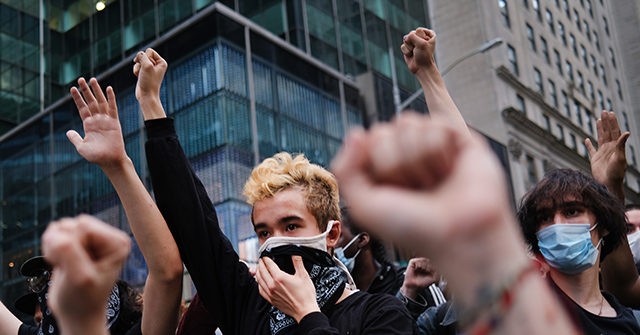 A top Texas law enforcement official said Tuesday that evidence shows the far-left extremist group Antifa was involved in the looting of an Austin store over the weekend in the wake of nationwide protests and riots over the death of George Floyd, who recently died in police custody in Minneapolis.

“The protest and looting of Target in Austin that was done and organized by an Antifa web page and of course, the surveillance that was provided over the internet identifying where law enforcement resources were staged, was done over Antifa accounts,” Col. Steve McCraw, Director of the Texas Department of Public Safety, told reporters in a press briefing.

McCraw then said, “There’s evidence of Antifa” operating in the Dallas-Fort Worth area as well, though he would not elaborate.

The official also said he is not aware of any evidence to corroborate claims that white supremacists are linked to violent unrest in the state.

McCraw then warned: “We do have special agents embedded trying to identify criminals that are leveraging these or using these as an opportunity exploiting these demonstrations, identifying them and we’ve already identified some of them and we will be arresting them, but not at this particular moment.”

On Sunday, Attorney General William Barr declared that violent unrest “instigated and carried out by Antifa and other similar groups in connection with the rioting is domestic terrorism and will be treated accordingly.”

“With the rioting that is occurring in many of our cities around the country, the voices of peaceful and legitimate protests have been hijacked by violent radical elements. Groups of outside radicals and agitators are exploiting the situation to pursue their own separate, violent, and extremist agenda,” Barr said in a statement. “It is time to stop watching the violence and to confront and stop it. The continued violence and destruction of property endangers the lives and livelihoods of others, and interferes with the rights of peaceful protestors, as well as all other citizens.”

The attorney general also warned federal law enforcement would use the offices of 56 regional FBI Joint Terrorism Task Forces (JTTF) to track down the perpetrators of criminal activity.

Barr’s remarks came as President Donald Trump announced that the United States will be designating Antifa as a terrorist organization.

“The United States of America will be designating ANTIFA as a Terrorist Organization,” tweeted the president.

The United States of America will be designating ANTIFA as a Terrorist Organization.