HOUSTON, Texas — Firefighters on the northeast side of Harris County discovered what appears to be a drug lab and distribution warehouse while responding to a townhouse “blaze.” Investigators from the Harris County Sheriff’s Office report they seized nearly $3 million in heroin, methamphetamine, and what they believe to be fentanyl.

The Eastex Fire Department responded to a townhouse on the northeast end of Harris County. Firefighters executed a search for possible victims or survivors after the “intense blaze” was extinguished. Instead, they found suspicious packages throughout the home, according to the Harris County Sheriff’s Office. 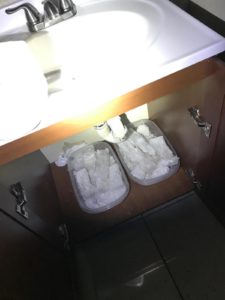 Investigators responded to the location and recognized the bundles as being drugs packaged for distribution. The investigators contacted the Houston High Intensity Drug Trafficking Area Taskforce (HIDTA), for further investigation.

Investigators also found and seized a Smith & Wesson AR-15 with two 100-round drums, a Hi-Point .45 caliber pistol, and a body armor vest. A spokesman for the sheriff’s office told Breitbart News that the AR-15 appeared to be a standard retail model with no modifications and that no ammunition was found inside the home. The spokesman said the body armor was not law enforcement or military grade.

At this time, sheriff’s office officials said they have no information about the identity of the drug lab operators or if they have any gang/cartel connections. Investigators are trying to determine who leased or owned the townhouse and what started Wednesday’s blaze.

Firefighters said all safety precautions were utilized in connection to possible exposure to fentanyl and other dangerous chemicals.

Investigators ask that anyone with information about the occupants of the townhouse or any other activity in the area to contact Crime Stoppers who is offering a $5,000 reward. Crime Stoppers can be contacted anonymously at 713-222-TIPS (8477) or at www.crime-stoppers.org.