Rising uncertainty and escalating tariffs did not stop Texas businesses from continuing to expand in September.

Many Texas businesses are feeling the impact of tariffs, according to the Federal Reserve Bank of Dallas’ “Texas Business Outlook Survey” released Monday. Manufacturers say tariffs have pushed up their input costs and dramatically increased uncertainty.

The production index, a key measure of state manufacturing conditions, fell six points to 23.2. This indicates that production continued to expand but at a slower pace than the previous month.

The production index has now registered six consecutive months above 20, a prolonged period of expansion unmatched since 2006. During the Obama administration, the monthly index only exceeded 20 four times total, twice in 2010, once in 2011, and once in 2014.

All positive readings in the manufacturing survey indicate expansion of factory activity, while readings below zero indicate contraction. The readings were in negative territory for much of 2015 and 2016. They have been decidedly positive since the end of 2016.

The September survey included a special set of questions about tariffs. The answers to these questions show that businesses are divided on the effects of tariffs, with the largest share–45 percent–saying that they have had no effect so far and 37 percent saying they expect a negative effect in the future. Thirty-two percent said they were not sure about the longer term effects of tariffs.

Manufacturers were more starkly divided on the effects of tariffs than other businesses. Forty-seven percent noted a negative impact and nearly 10 percent said there had been a positive impact. Interestingly, the number seeing the tariffs as having negative consequences in the long-term was 39 percent, lower than the current conditions. Just nine percent said tariffs were currently a positive but 15 percent predicted they would be a positive in the long term. 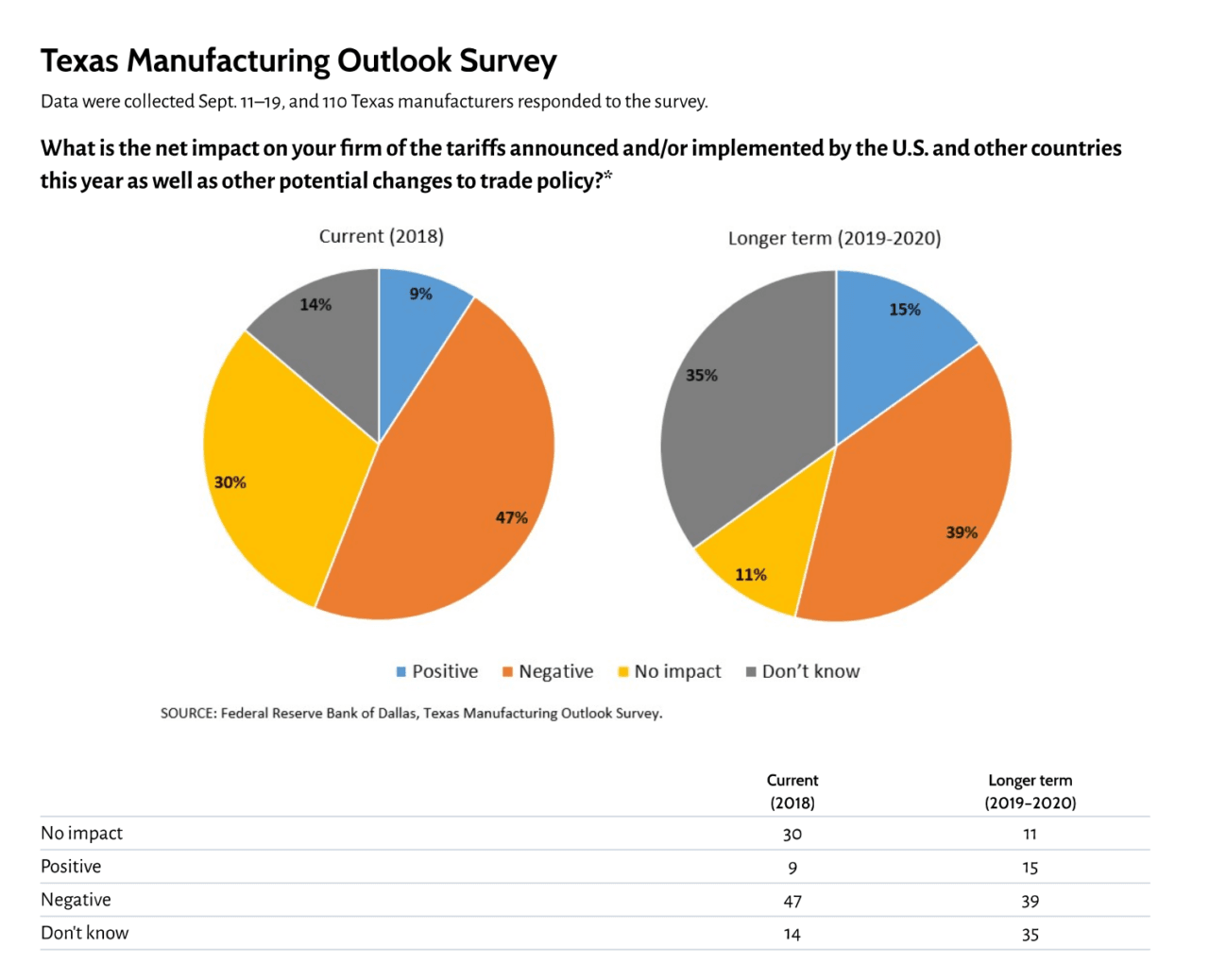 Comments received by the Dallas Fed were mixed.

“Business is good. We love President Trump and his policies. Keep it up,” a metals manufacturer said.

“We have tried for years to sell our products in China with no luck due to high Chinese tariffs (25 percent). Hopefully, this will change and open a new market for us,” a chemical manufacturer said.

“We are getting killed on aluminum pricing and availability,” an executive from the transportation equipment manufacturing sector said.

The greatest effect of tariffs was an increase in uncertainty. Sixty-five percent of manufacturers said tariffs had raised uncertainty, according to the survey.