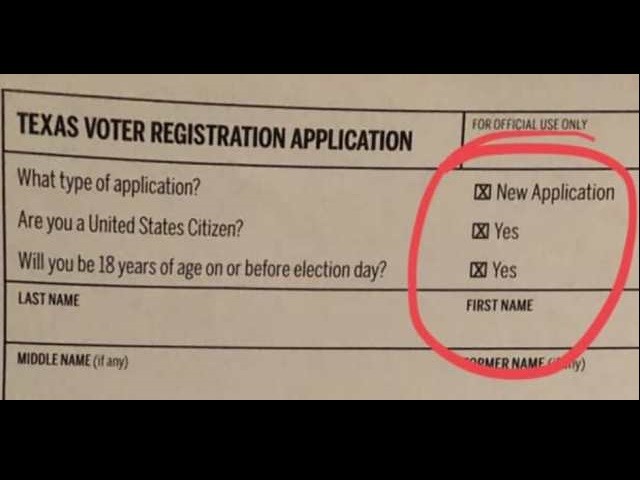 Pablos requested assistance from Paxton in “reviewing allegations of criminal activity in connection with pre-marked voter registration applications sent to multiple non-United States citizens in the Rio Grande Valley, as well as with applications sent to deceased individuals.”

Last week, the Public Interest Legal Foundation (PILF), a national election integrity law firm, alerted district attorneys in Starr and Hidalgo Counties about “altered” voter applications sent by the Texas Democratic Party to South Texas noncitizens. The mailers urged recipients to fill out the forms “immediately” to cast ballots in the November midterm election. The applications came with the U.S. citizenship box pre-checked as “yes,” potentially creating false claims of voter eligibility, according to the complaint.

“Section 13.007 of the Texas Election Code provides that a person commits an offense if the person knowingly makes a false statement or requests, commands, or attempts to induce another person to make a false statement on a voter registration application,” wrote Pablos’ office in a letter to the AG’s office. “A violation of Section 13.007 of the Texas Election Code is a Class B misdemeanor.”

In a statement Pablos said:

The numerous calls and complaints we have received regarding pre-filled voter registration applications sent to ineligible voters are highly disturbing, and our office has requested General Paxton investigate these troublesome claims. We continue to urge all Texans to be vigilant when receiving registration or ballot by mail materials from third parties, and my office will continue to work to ensure that Texans and Texas voters are protected from any illegal activity.

On Friday, the Secretary of State first warned Texans of the potential fraudulent voter registration materials in response to calls from residents who said they receive the pre-filled voter application mailers.

“This is a critical step in protecting both resident citizens and immigrants alike from the consequences of ineligible voting activity,” said J. Christian Adams, President and General Counsel for PILF, in a statement commending Pablos’ decision to refer the matter to Paxton.

“It was wholly unnecessary for the Texas Democrats to alter voter registration forms,” said Adams. “They invited confusion and potentially unlawful activity where the consequences would only be paid by immigrant communities.”

In Texas, illegal voting is a second degree felony punishable by two to 20 years in prison and a fine of up to $10,000. In September, a Mexican national received 10 years in jail after pleading guilty to voter fraud charges including ineligible voting in Montgomery County. Last year, a Mexican national and legal permanent U.S. resident got an eight year prison sentence for falsely claiming U.S. citizenship in Dallas County where she voted as a Republican at least five times. Deportation proceedings can follow.