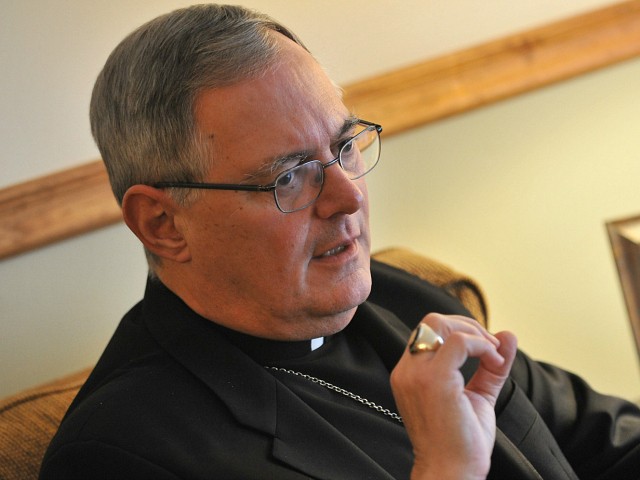 A Texas bishop has thrown his public support behind the bishop of Providence, RI, who has been pilloried after saying Catholics should not attend gay pride parades.

On June 1, Providence Bishop Thomas J. Tobin (pictured) reminded his Twitter followers of Catholic teaching regarding the immorality of homosexual activities and therefore the problem with celebrating them as if they were something to be proud of.

“A reminder that Catholics should not support or attend LGBTQ ‘Pride Month’ events held in June,” the bishop tweeted. “They promote a culture and encourage activities that are contrary to Catholic faith and morals. They are especially harmful for children.”

Although Bishop Tobin’s words were a simple restatement of well-known Catholic doctrine regarding homosexuality and nothing particularly novel or incendiary, he was inundated with abusive messages on social media and censured publicly by the mainstream media.

The Boston Globe, for instance — never missing an opportunity to attack the Catholic Church — proclaimed in a headline that Tobin was guilty of sending out a “homophobic tweet” that had provoked righteous anger among the citizenry.

The Globe quoted the leader of a Rhode Island gay rights group who said he was “honestly flabbergasted” by the Tweet, as if the bishop had said something different from what the Church has always said.

“He is like the Donald Trump of the Catholic Church, he goes on Twitter and spews out hate,” said Joe Lazzerini, the president of Rhode Island Pride.

Meanwhile, instead of closing ranks, most of the U.S. bishops went silent on the issue, leaving their comrade-in-arms to suffer all the abuse by himself.

One notable exception was Bishop Joseph Strickland of Tyler, TX, who came to the defense of his brother bishop.

“Please stop labeling bishops who speak the truth of the Gospel as homophobic,” Bishop Strickland tweeted Sunday. “God gave us sexual intimacy for the procreation of children and the deeper union of a man & woman in marriage.”

“Stating this truth is not homophobia, it is simply reality,” he said.

Predictably, the LGBT mob quickly turned its wrath on Strickland as well, sharing with him a little of the “love” they pride themselves on.

“Your superstition doesn’t justify bigotry. Believe what you want, but don’t whine when your bigotry is called out for what it is,” stated one of the tamer comments.

Many on social media declared that the biblical teaching on sexual morality had no place in the modern world and needed to catch up with the times.

The torrent of abuse rained upon the two bishops for simply preaching traditional Catholic doctrine underscores the prophetic words uttered by Supreme Court Justice Sam Alito in his written dissent to the Obergefell v. Hodges ruling in 2015.

In that paper, Alito predicted that the decision to force states to legalize same-sex marriage would be employed to punish Americans who adhere to a biblically based understanding of marriage as the union of one man and one woman.

“It will be used to vilify Americans who are unwilling to assent to the new orthodoxy,” he wrote, and “exploited by those who are determined to stamp out every vestige of dissent.”