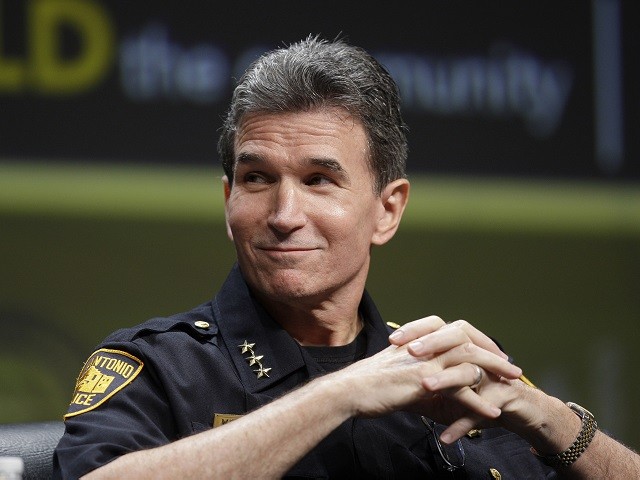 Texas Attorney General Ken Paxton filed a lawsuit against the City of San Antonio, the municipal police chief, and other officials for alleged violations of the sanctuary city law commonly known as “SB4.” The lawsuit stems from a December 2017 incident where the San Antonio police chief released a group of illegal immigrants found in the back of a tractor-trailer before proper officials could screen them.

AG Paxton filed the lawsuit against the City of San Antonio, the San Antonio Police Department, San Antonio Police Chief William McManus, and City Manager Sheryl Sculley on Friday. The lawsuit calls for the City to comply with the requirements set forth under Senate Bill 4, according to a statement obtained from the Office of the Attorney General (OAG). The State asked the court to issue an injunction requiring the City and Chief McManus to comply with the law and prohibit the police department from “thwarting federal immigration enforcement.” The State also seeks civil penalties against the City, the police department, and Chief McManus.

“Senate Bill 4 guarantees cooperation among federal, state, and local law enforcement to protect Texans,” AG Paxton said on Friday. “Unfortunately, some municipalities, such as San Antonio, put the safety of police officers and the public at risk by defying state law. The court should grant our request for injunctions and civil penalties against San Antonio to send a message that all Texas cities must obey the law.”

A spokesman for the OAG told Breitbart News this is believed to be the first enforcement action taken under the SB4 legislation.

The lawsuit alleges that Chief McManus skirted normal San Antonio Police Department protocol by “arranging for immigration attorneys from an activist group to provide the suspected aliens with legal advice and to act as a translator,” OAG officials stated. “The police chief called a private entity to take the aliens away from Immigration and Customs Enforcement. McManus and his subordinates never checked the criminal history of the suspected aliens, nor did they contact Texas Child Protective Services to investigate the safety of a minor who was being smuggled.”

Chief McManus told reporters during a January 2018 press conference that he released 12 alleged illegal immigrants found in a tractor-trailer on December 23, 2017. He did so without allowing the federal government to properly vet them for criminal or immigration records, Breitbart News reported at the time. He also made the decision to charge the driver under Texas human smuggling statutes, despite releasing the purported witnesses to the alleged crime.

“Once the folks got here to police headquarters we have no jurisdiction to hold them, to detain them, so they were released to Catholic Charities and what Catholic Charities did with them I don’t know,” Chief McManus told reporters.

As of the time of this publication, “there is no criminal case filed against the individual who transported the suspected aliens as part of a smuggling operation despite his confession,” the AG stated in the lawsuit.

Four days after the chief’s press conference, the president of the San Antonio Police Officers Association called for the department to place the chief on administrative leave and for an investigation into what he called “obvious violations of the general manual.”

In a two-page letter to the City Council of San Antonio, SAPOA President Michael Helle said that his officers are supposed to “hold down the scene and call (federal agents) to investigate and take over. That was exactly what was happening until our Chief of Police, unrequested, showed up at the scene.”

Bexar County District Attorney Nico LaHood took exception to the chief’s claim that he did not have jurisdiction to hold the migrants. The DA told Breitbart Texas during a January interview that the chief did have the authority and jurisdiction to hold the migrants in an interview Friday. When asked if the chief had the authority to hold the migrants for up to 48 hours as material witnesses, LaHood “absolutely” agreed. “Material witnesses may be held to make sure they are properly identified.” He said they can also be held while police investigators question them as witnesses and obtain statements and other evidence.

The DA also confirmed that McManus’ decision to try the case under state jurisdiction is highly unusual.

“This is the first time since the new Texas human smuggling law (HB10, signed into law in 2015) went into effect that I have been asked to prosecute a case like this,” the DA explained. He said that the chief’s decision makes his job “much more challenging.”

Following Helle’s letter to the city council, Texas Lt. Governor Dan Patrick called on the OAG to look into the behavior by the San Antonio chief of police.

“I am very troubled by the recent news reports of the San Antonio police chief releasing suspected illegal immigrants in a case of human trafficking or human smuggling without proper investigation,  identification of witnesses,  or cooperation with federal authorities,” Lt. Governor Patrick said in a letter to Texas Attorney General Ken Paxton. “Such action could be in direct violation of the recently passed Senate Bill 4 and threatens the safety of citizens and law enforcement.”

Breitbart Texas confirmed with the Texas OAG that they had received at least three complaints on the matter. A spokesperson for the office told Breitbart News at the time that they could not confirm or deny any investigation but that they have received “several complaints” and that the office is working through the forms to make sure they are properly filled out and contain the required information to proceed with an investigation.

Later that day, January 11, the Texas OAG did confirm to Breitbart News that an investigation was underway.

“Our office has received multiple complaints alleging that the San Antonio police chief violated Senate Bill 4, the Texas law prohibiting sanctuary city policies that the attorney general has authority to enforce,” OAG spokesman Mark Rylander said at the time in response to an inquiry from Breitbart Texas. “We have begun our investigation and demanded that the San Antonio Police Department preserve all of its records relating to the incident.”

The OAG notified the City of San Antonio that an investigation was underway and ordered the city to preserve any evidence that might be related to the case.

“All law enforcement officers are going to be required to follow this law,” Governor Abbott told Breitbart Texas in an exclusive interview immediately after signing the SB4 bill into law. “If they refuse to follow this law, or if they adopt sanctuary city policies, they are subject now to the stiffest penalties in America for adopting sanctuary city policies – which includes jail time where sheriffs could wind up in the same jail they may be releasing inmates from who are the subject of ICE detainer requests.”

The law provides both civil and criminal penalties for city and law enforcement officials who violate the law.

The state received several challenges to the new law. In September 2017, the United States Court of Appeals for the Fifth Circuit sided with the State of Texas and overturned a lower court ruling. The ruling allowed the State to move forward with possible enforcement actions under the law.