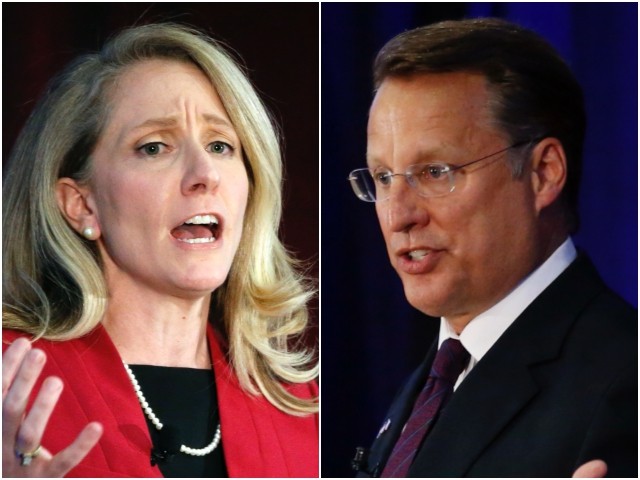 A new Sienna College/New York Times poll reveals that Brat leads Spanberger in the race 47 percent to 43 percent with nine percent of likely voters in the district still undecided.

Spanberger has been plagued with scandal throughout her race against Brat — who famously defeated Republican House Majority Leader Eric Cantor by running against amnesty for illegal aliens, which Cantor supported.

As Breitbart News has chronicled, between 2002 and 2003, Spanberger was a teacher at the Islamic Saudi Academy, a school that has become known as “terror high” for its notoriety in graduating students who went on to become Islamic terrorists.

While Spanberger was teaching at the Islamic Saudi Academy, Abu Ali plotted with Al Qaeda associates to assassinate Bush. The terror plot included Abu Ali either getting close to Bush and shooting him in the head or detonating a car bomb near the president.

In 2005, the New York Times noted that Abu Ali had been given a “blessing” by high ranking members of Al Qaeda to assassinate Bush. In 2006, it was reported that when Abu Ali graduated from the Islamic Saudi Academy, he was voted “Most Likely to be a Martyr,” a potential indication that the Al Qaeda terrorist had radical Islamic views that went unreported by school officials.

Spanberger has almost become a voice for the business lobby on the issue of immigration, endorsing wage-crushing amnesty for all 12 to 22 million illegal aliens, saying amnesty is necessary to fulfill “the needs of the employers.” Brat opposes amnesty for illegal aliens and supports legislation to reduce the mass inflow of low-skilled legal immigrants in order to raise the wages of American workers.