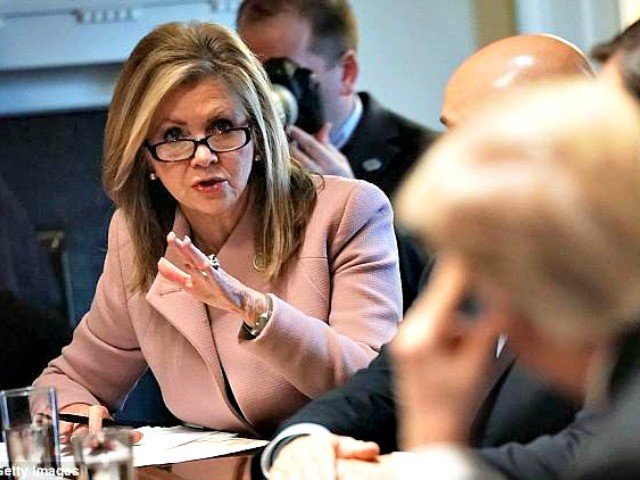 Job Creators Network presented Rep. Marsha Blackburn (R-TN-07) with its Defender of Small Business Award on Wednesday in Franklin, Tennessee for the key role she played in the passage of President Trump’s Tax Cuts and Jobs Act.

“This is the most important tax law in three decades and it has ignited Tennessee’s economy,” Alfredo Ortiz, President and CEO of Job Creators Network (JCN) told the enthusiastic crowd who gathered at The Factory in Franklin.

“Marsha Blackburn made a courageous vote, and it was definitely the right vote for taxpayers and small businesses in Tennessee,” Ortiz added.

Blackburn, the Republican nominee for the U.S. Senate seat from which Sen. Bob Corker (R-TN) is retiring, praised the economic benefits that have accrued from the passage of the Tax Cuts and Jobs Act, which President Trump signed into law in December.

“The average family in our area is saving $2,300 per year. That’s a mortgage payment, or a down-payment on a car, or a new appliance,” Blackburn said.

“It certainly isn’t crumbs,” she said, in a push back against Democrat House Minority Leader Rep. Nancy Pelosi (D-CA) and other far left Democrats who have referred to the tax savings as “crumbs.”

“The fact is that the tax cuts have ignited our economy, creating record jobs, record investment, and record optimism,” Blackburn added.

Like Pelosi and other Democrats, Bredesen has attempted to belittle the economic benefits of The Tax Cuts and Jobs Acts, a difficult task in an economy that is experiencing four percent GDP growth and record highs in the stock market.

“Former Gov. Phil Bredesen said Wednesday that President Donald Trump’s tax cuts were ‘oversold’ to the country and have had a minimal impact on declining unemployment figures,” The Tennessean reported in a story published at almost the same time that the JCN event was beginning just a few miles away.

Blackburn told The Tennessee Star, which covered the Franklin event on Wednesday, “the tax cuts have made Tennessee’s median income rate grow faster than any state in the American Southeast. Tennessee’s median income rate, meanwhile, is one of the five fastest growing nationwide.”The state is at 2.7 percent unemployment, and that is why you are seeing the aggressive wage growth,” Blackburn added.

Former CKE Restaurants CEO Andy Puzder, a Tennessee resident who also spoke at the event, told The Star “members of other media outlets don’t want these stories front and center.”

“The news media doesn’t seem to be covering it very reliably. I assume for some outlets it’s a dissatisfaction with President Trump,” said Puzder who was Trump’s nominee for Secretary of Labor in early 2017 before he withdrew.

“I think to some extent the numbers aren’t easy to understand or to distill into stories.”

Among the important points the media has missed, Puzder said:

• Hourly wages are up 3.4 percent in August over the year before and benefits are up 3 percent.
• Take home pay is up 5 percent.
• The country has the lowest number of unemployment claims filed since 1969.
• In August, the Congressional Budget Office reported that for the quarter ending in July the federal government took in $26 billion more this year than it did last year.

“We have had more job openings than people unemployed. Businesses are investing and consumers are buying,” Puzder said.

Wednesday’s event in Franklin, Tennessee was part of the JCN’s Tax Cuts Work campaign, a nationwide tour of events whose purpose is “to publicize and amplify the positive impacts Americans are experiencing as a result of the Tax Cuts and Jobs Act—legislation that significantly reduced the tax burden on small business entrepreneurs and placed more take-home pay in the paychecks of every hard-working American.”

JCN is a small business advocacy group based in Atlanta, Georgia.