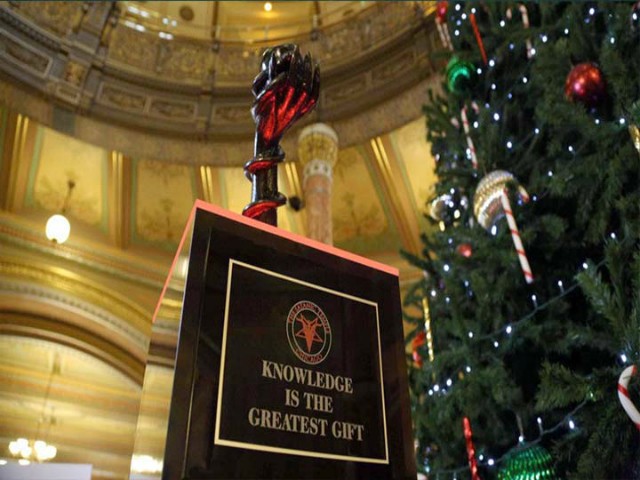 The government is allowing the Temple of Satan to install a statue as an exercise of the church’s First Amendment rights.

Entitled “Snaketivity,” the four-foot black statue depicts a snake coiled around an upraised arm that holds an apple. The pedestal upon which it rests reads, “Knowledge Is The Greatest Gift.” The statue is in reference to the story of the fall of humanity in succumbing to temptation to eat of the Fruit of the Knowledge of Good and Evil in the biblical book of Genesis.

The statue, positioned between a Christmas tree and a Menorah, is permitted as an expression of the Temple of Satan’s right to freedom of speech. “Under the Constitution, the First Amendment, people have a right to express their feelings, their thoughts,” Dave Druker, the spokesman for Ilinois’ secretary of state, told the State Journal-Register. “This recognizes that.”

Anti-abortion group Illinois Family Action publicly criticized the gesture, tweeting, “Satanic Temple monument was added to the #Illinois Capitol rotunda displays. They fail to realize that the little baby in the manger has CRUSHED Satan’s head and the gates of hell will NOT prevail”:

Satanic Temple monument was added to the #Illinois Capitol rotunda displays. They fail to realize that the little baby in the manger has CRUSHED Satan’s head and the gates of hell will NOT prevail. https://t.co/xYXEKeRPus #ILRight #ccot

Despite the name, the Temple of Satan considers itself a non-theistic group. It “encourage[s] benevolence and empathy among all people,” using its unique position to emphasize the separation of church and state, as well as promote “practical common sense and justice.”

Recently, the Temple of Satan won $50 million from Netflix for a depiction of one of its religious works of art in The Chilling Adventures of Sabrina.

Previously, the statehouse featured a Festivus pole, taken from the holiday invention during an episode of Seinfeld.