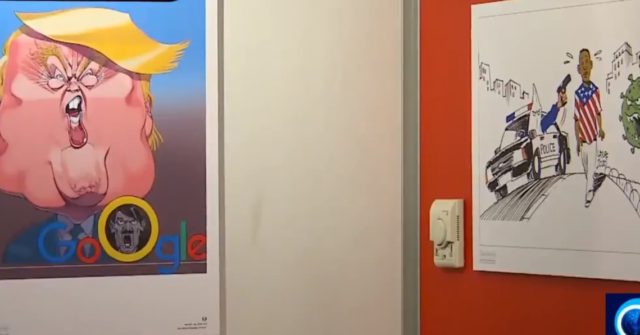 TEL AVIV – The United States, its police and President Donald Trump are all depicted as Nazis or Ku Klux Klan members in a new art exhibition in Tehran called “I Can’t Breathe.”

While Iran’s state-run media has been actively backing the George Floyd protests sweeping America, Tehran suppresses dissent of any kind at home, and routinely tortures and kills protesters. As recently as November, Iran quashed nationwide civil rallies calling for the ouster of the Islamic Republic’s leadership by arresting thousands of people and killing hundreds.

According to Masoud Shojaei Tabtabaei, the director of the Center for Visual Arts in Hozeh Honari which housed the exhibition, it featured 72 artworks by 45 artists from 27 countries.

One was an image of a swastika crushing George Floyd’s neck and another featured Trump crushing his neck. A third depicted a masked Statue of Liberty taking a knee while a fourth had the U.S. flag of the United States with Ku Klux Klan imagery.

Another art piece transformed the U.S. flag into a guillotine with the words “Only Colored.” Two more images depict U.S. police officers wearing Ku Klux Klan hoods. Trump is also shown as Hitler in one. He is seen in another climbing the Statue of Liberty and shouting, “Shoot protesters!”

An art piece also featured the Star of David crushing a white dove with a speech bubble saying, “I can’t breathe” – an apparent reference to the Palestinians.

Also last week, Iranian President Hassan Rouhani said the “great nation” of Iran has smashed the U.S. knee that was on its throat.

“They (Americans) have always been like this throughout history. They have pressed their knee on the neck of every oppressed person they have found in order to kill him. This is their policy, not the policy of a single cop in a single city. This is basically the U.S. policy,” Rouhani said.

“But the great Iranian nation broke that knee. They (Americans) wanted to do the same in 2018. They brought the knee close to the throat of the (Iranian) nation. But our dear nation smashed their knee with the giant sledgehammer of national unity and solidarity. Now they (Americans) have no knee anymore to put pressure on the Iranian nation.”