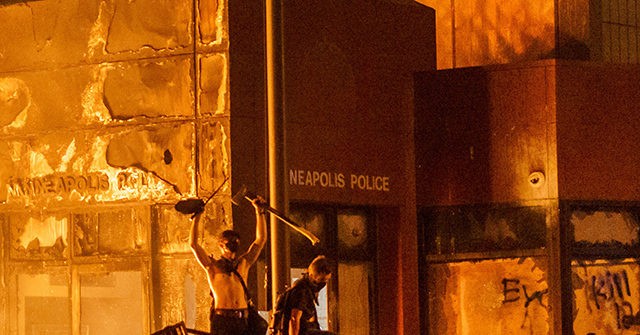 Leftist outlet Teen Vogue told its readers that the terrorist organization Antifa “aspires to create a better world” in the wake of riots that have broken out across the country, which have involved looting, vandalism, businesses being destroyed, beatings, and death.

“‘Antifa grows out of a larger revolutionary politics that aspires toward creating a better world, but the primary motivation is to stop racists from organizing,’” tweeted Teen Vogue on Monday.

🗣 “Antifa grows out of a larger revolutionary politics that aspires toward creating a better world, but the primary motivation is to stop racists from organizing.” https://t.co/ShS2RPfDN2

The magazine’s tweet included an 2017 Teen Vogue interview with Dartmouth College historian Mark Bray, in which he defends the violent group that President Donald Trump recently announced would be designated as a terrorist organization.

“The vast majority of what they do does not entail any physical confrontation,” said Bray of Antifa, a violent group that federal law enforcement officials are now saying is stoking violence at protests over the death of George Floyd.

Bray added that “the focus” of Antifa is simply “researching white supremacists and neo-Nazis” and getting their events cancelled or organizing boycotts. “What the media gets wrong is focusing on the spectacle without recognizing that that’s only the tip of the iceberg of anti-fascist organizing,” acknowledged Bray. “As I said, the majority of it does not entail any confrontation. And is focused on exposing Nazis and using the popular opposition and unpopularity of Nazis more broadly to make it so that being a Nazi publicly is impossible. But of course part of what they do, if necessary, is to confront far-right groups physically.”

Breitbart News reports that the radical anarchist group behind much of the unrest in American has brought chaos to the streets of Great Britain, joining thousands of Black Lives Matter activists to in shutting down much of London.

#BlackLivesMatter and #antifa protestors shut down streets outside US Embassy pic.twitter.com/Q5G1wBUMXO

Teen Vogue‘s bizarre dredging-up of this 2017 piece arrives in the wake of riots taking place across the country, which have involved looting, buildings being set on fire, businesses destroyed, and people being beaten and killed.

The riots that have unfolded across the nation prompted the mayors of several cities to issue curfews and call on their state’s national guard for help with quelling what appears to be a perpetual state of violence and chaos seen in videos circulating on social media.