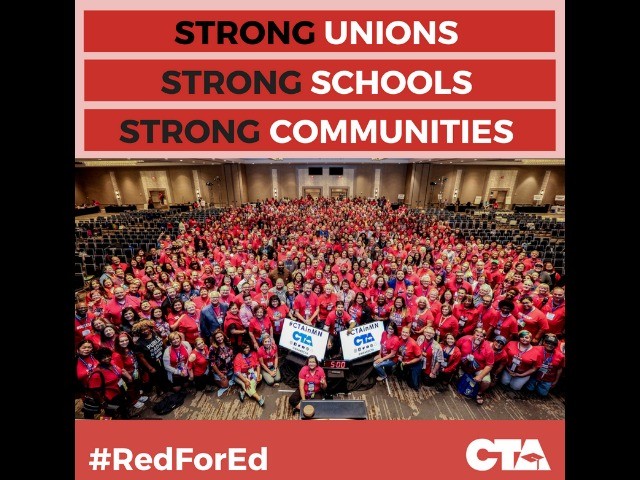 Teachers unions are holding up the radical #RedForEd movement to fuel their demands for higher wages and more public school funding as a strike looms this week in the Los Angeles Unified School District (LAUSD).

Join us 👉 In support of @UTLAnow and @OaklandEA strike actions, CTA is holding a California #RedforEd Walk-in Day on January 11. Show solidarity as we all fight for the public schools all our students deserve.

In solidarity with @UTLAnow and @OaklandEA, CTA is holding a statewide #RedForEd Walk-In Day on January 11. What is a walk-in? https://t.co/nSHTyCDbcU

The nation’s largest teachers union – the National Education Association (NEA) – has been promoting #RedForEd as a movement to challenge what it views as an attempt to privatize public education via the school choice initiative launched by current Education Secretary Betsy DeVos.

.@UTLAnow educators are fighting for the building blocks of a healthy school that every child deserves. Learn all about why LA educators are #strikeready 👇🏽 #WeAreLA #RedForEd https://t.co/HmKeLfelZw

In a statement to USA Today, a DeVos spokesperson said the “false narrative that the Secretary is anti-teacher is nothing more than a political ploy.”

Secretary DeVos is fighting every day to give all students, no matter what neighborhood or zip code they live in, access to the education that best meets their individual needs – be it public, charter or private. For anyone to actively work to limit the number of education options available to students is a slap in the face to the millions of students who are trapped in schools that aren’t helping them learn or stuck on charter school waiting lists hoping for a brighter future.

According to NEA, as a result of cuts to public education, “1 out of 5 educators must take another job to make ends meet;” “71% of people think teachers are not paid enough;” and “16% less funding goes to districts with the highest poverty.”

In this tweet, UTLA expresses its hostility toward Los Angeles schools Superintendent Austin Beutner, seen by unions as a friend to competitors of public schools:

Hmmm, think Beutner’s morning got off on the wrong foot? Check out our mega-ad on the cover wrap of today’s LA Times. Be sure to pick up your copy and get the historic “STAND WITH LA TEACHERS” poster by Ernesto Yerena. #StrikeReady #UTLAStrong pic.twitter.com/dVhPRxd4XS

In addition to competition created by the school choice initiative, teachers unions suffered a blow with the Supreme Court’s ruling last June in Janus v. AFSCME, which banned public sector unions from compelling non-members to pay dues because it violated their First Amendment rights.

A string of teacher strikes arose in states throughout the country last year, including Arizona, where #RedForEd leader and Marxist teacher Noah Karvelis claimed, “Teaching is political.” In December 2017, Karvelis tweeted his ideas about what teachers should discuss in class:

Things more educators should discuss (especially if they work with young (white) men) in the classroom in 2018:

Teaching is political and silence is complicity.

In a post at Truth in American Education, parent activists Denis Ian and Michelle Moore write that – because of the radical shift leftward they have taken – teachers’ unions are actually at war against parents.

The writers say while teachers once earned the favor of parents with their claims they were fighting and striking “for improving public education,” and “for the kids,” they then “threw it all away.”

They became political big-shots. They sold out to suspect reformers and protected seedy characters. They paid less and less attention to the classroom teachers … those important everyday professionals. Instead, they fell in with social justice hellions … answering to radical factions rather than to the parents who owned the schools … and paid the bills.

And they deserted children, too.

Unions listened more intently to social justice demagogues than to educational professionals whose expertise … and dedication … made American public education the great social equalizer. They swore off measured reforms and reprioritized the ambitions and intentions of public education.

And they didn’t bother to ask parents …

The moms and dads who had values and attitudes they didn’t want disturbed. Morals and behaviors they valued as indispensable.

Ian and Moore say both the NEA and the American Federation of Teachers (AFT) have “reaffirmed their commitment to radical activism.”