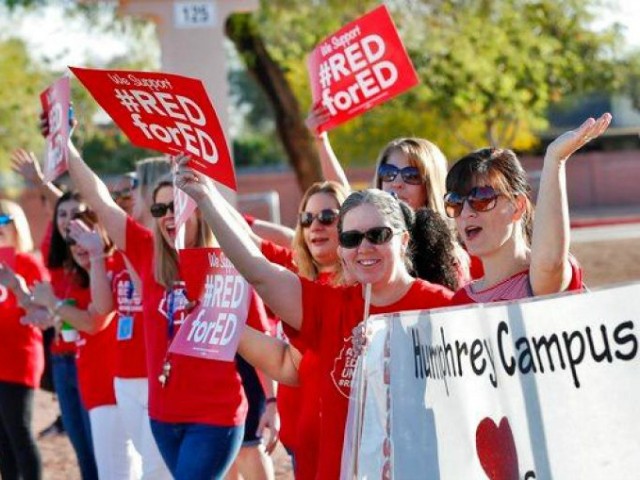 An Education Week analysis of midterm election data finds that of the 177 teachers who ran for office in their state legislatures during the midterms, only 42 were elected.

According to the education media outlet, teachers were spurred to run for public office as a result of the teacher walkouts that protested teacher pay and funding for public schools.

It was the culmination of months, if not years, of activism and advocacy for many of these educators, and yet the victory wasn’t clear-cut. While 42 teachers won, nearly 80 teachers—or two-thirds of those on the ballot—lost their legislative bids in Tuesday’s midterm elections, according to an Education Week analysis. And gubernatorial candidates who pushed for pumping more money into public schools were also defeated in Oklahoma and Arizona, leaving teachers there reeling.

“It could have cohered into a clear story—a wave story—but in fact, it’s more of a patchwork,” said Jeffrey Henig, the director of the politics and education program at Teachers College at Columbia University. “This will be disappointing to some folks who were very excited and envisioned a teacher wave.”

Of the 42 teachers who were elected to their state legislatures, 33 are Democrats, and 9 are Republicans.

Many of the teacher walkouts earlier this year were led by teachers entrenched in the radical philosophies that aim to develop Marxism in schools. National teacher union leaders promoted these walkouts and attempted to relate them to gun violence in schools.

In Arizona, for example, Noah Karvelis led the teachers’ movement known as #RedForEd. He tweeted last December that “teaching is political”:

Things more educators should discuss (especially if they work with young (white) men) in the classroom in 2018:

Teaching is political and silence is complicity.

We have to face uncomfortable topics to stop this. https://t.co/b2Ck6ypqDb

In April, Karvelis gave an interview – while sitting in his public school classroom with students present – about #RedForEd to Radio Sputnik, which the Russian government owns and operates. During the interview, listeners could hear the school bells — which are noted by the host — and Karvelis himself admitted students were present in his classroom.