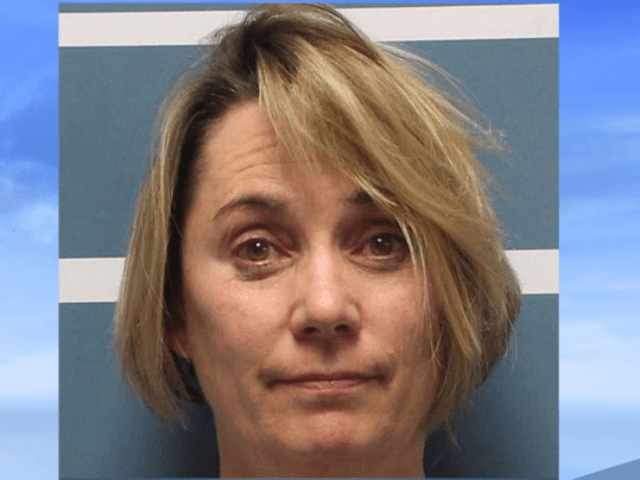 A high school teacher in Visalia, California, has been jailed after forcibly cutting a student’s hair in class while singing the “Star-Spangled Banner.”

Chemistry teacher Margaret Gieszinger, 52, was seen on a video, chasing students with scissors in the classroom Wednesday at University Preparatory High School, as she was loudly singing the national anthem.

According to an ABC7 news report, students reported Gieszinger arrived in class with a pair of scissors, telling them it was haircut day.

“We think she’s going to try to be funny and be like ‘Oh did you really think I was going to cut his hair?’’ said one student requesting anonymity. “But she did cut a hair off, and she started singing the Star-Spangled Banner and she was singing it really loudly as she ceremoniously tossed a chunk of hair behind her.”

The student said he ran to the school’s main office for help.

After Gieszinger grabbed at another girl’s hair, students ran out of the classroom.

The students reportedly said they were unaware of what triggered the teacher’s behavior, but added Gieszinger had another similar breakdown earlier in the week.

College of the Sequoias (COS) Police arrested Gieszinger, “on suspicion of corporal injury to a child,” said the ABC7 news report. Her bail is set at $100,000.

In a statement about the incident, the Tulare County Office of Education said on Thursday the school staff and the administration “are deeply concerned for the students who were subjected to the disturbing behavior in Margaret Gieszinger’s class yesterday morning.”

The Office of Education announced the availability of counselors from its mental health services program to provide support to the students in Gieszinger’s class.

“We take very seriously the safety of the students in classrooms and on the COS campus,” the statement said, and continued:

We move decisively when questions of inappropriate and unprofessional conduct are brought to the attention of UPHS administration. In this instance, we promptly removed Ms. Gieszinger from her classroom and worked closely with the COS Police Department. We are reviewing all available information and will take the most severe employment action appropriate. Ms. Gieszinger will not return to her UPHS classroom.

The Office of Education said a substitute teacher would be taking over the class.