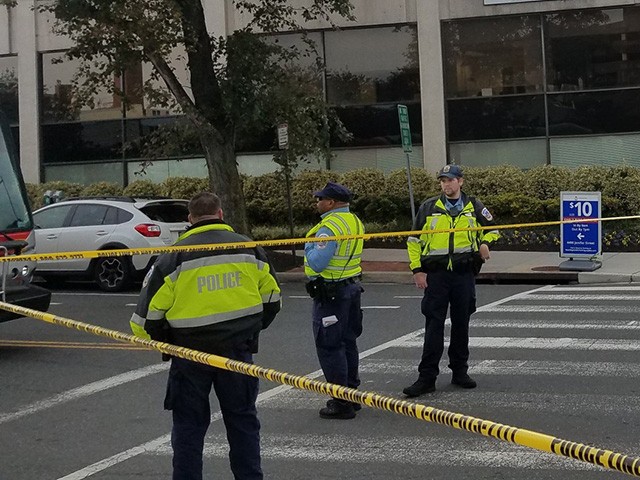 The radio station first disclosed the development in a tweet, stating: “Suspicious package received at WMAL. Building evacuated. Police and fire are on scene. We’ll be back with you live as soon as we can, but for now enjoy our ‘Best of’ programming on WMAL.”

Suspicious package received at WMAL. Building evacuated. Police and fire are on scene. We’ll be back with you live as soon as we can, but for now enjoy our “Best of” programming on WMAL.

Host Larry O’Connor shared a photo of the scene near WMAL showing a minor police presence blocking off the street that the station is located on.

Suspicious package received at WMAL. We were ordered to evacuate by DC Police and Fire. We will be back on the air ASAP. pic.twitter.com/l58Ef1CdVT

Suspicious package received at WMAL. Building evacuated. Police and fire are on scene. The station will be back with you live as soon as it’s safe, but for now enjoy our “Best of WMAL” programming. pic.twitter.com/kJalvqPrcY

The scene outside my job at WMAL. Everyone’s been evacuated from the building while police and fire assess the situation. pic.twitter.com/E5I4lH3Ds8

Our radio stations here in NW Washington, DC have been evacuated due to a suspicious package. #wrqx #wmal pic.twitter.com/JaR9U3yL0j

It is unclear if the package is linked to the multiple apparent explosive devices sent to prominent Democrats, progressive billionaire George Soros, and CNN’s New York City bureau. O’Connor, a former editor at Breitbart News, said that he caught a glimpse of the suspicious package. He said that it did not look exactly like the apparent mail bomb photos released by authories, but “there were some similarities.”

I saw the package mailed to @WMALDC.

Though it does not look like the other packages we have seen the past day or two, there were some similarities. DC police examined it and immediately ordered full evacuation.

Citing the ongoing investigation, O’Connor declined to describe the package in further detail.

I’m not going to describe the package in question because there is an ongoing investigation. We were informed moments after police studied it to immediately evacuate.

Could be a bad copy cat or could be something more.

We will return to the air as soon as we can. @WMALDC

According to O’Connor, law enforcement has given the “all clear” and now allowing staffers back into the station’s offices.

We got the all clear. Will be on the air on a moment. Stand by… @WMALDC