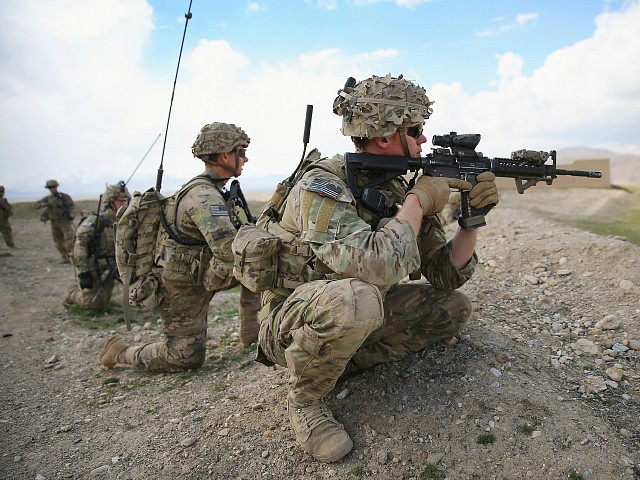 The Taliban claimed this week that the United States has agreed to continue helping foot the bill for Afghanistan reconstruction after the eventual American military withdrawal expected as part of a potential peace agreement to end the more than 17-year-old war.

“We have told them that after ending your military intervention, we will welcome U.S. engineers, doctors, and others if they want to come back for reconstruction of Afghanistan. And they have promised to do so,” Mullah Sher Mohammad Abbas Stanikzai, the chief Taliban negotiator in ongoing peace talks with the United States, declared on Wednesday, according to Voice of America (VOA).

The news outlet acknowledges that neither the Afghan government nor U.S. officials have responded to the assertions made by the Taliban chief negotiator.

U.S. officials have agreed to keep providing American taxpayer funds for Afghanistan reconstruction as part of a peace framework agreement that came after nearly a week of marathon discussions between the U.S. and the Taliban, which concluded on Saturday in Qatar.

American taxpayers have already invested an estimated $1 trillion in the overall war since the conflict began in October 2001, including over $132 billion for reconstruction and related activities in the country.

Most (over $83 billion) of the reconstruction funds have been devoted to training and equipping the Afghan security forces who are still struggling against the Taliban, the latest report to Congress by the U.S. Special Inspector General for Afganistan Reconstruction (SIGAR), a watchdog agency, shows.

Stanikzai confirmed that the United States and the Taliban have agreed on a framework for a peace accord.

Under the framework, the United States and the Taliban have agreed to establish two “technical teams” to determine a detailed plan on how to implement the agreements, he said.

The agreements mainly revolve around the withdrawal of foreign troops in exchange for guarantees from the Taliban that other terrorist groups such as al-Qaeda and the Islamic State (ISIS/ISIL) will not use Afghanistan to plan or execute attacks against the United States.

The U.S. is also asking the Taliban to observe a ceasefire and open dialogue with the Afghan government in exchange for a pull out of foreign military forces, the U.S. chief negotiator reportedly conceded.

Taliban jihadists have long refused to negotiate with Kabul, dismissing the Afghan government as an American “puppet.”

The Taliban, which is fighting to implement strict Islamic laws or sharia, considers itself the only legitimate government in Afghanistan.

Although the Pentagon claimed in its recent assessment that the Taliban is distancing itself from al-Qaeda, the annual Worldwide Threat Assessment unveiled this week by the U.S. intelligence community argues otherwise.

CIA Director Gina Haspel told lawmakers this week that a “monitoring regime” would be necessary to bind the Taliban to prevent any group from using Afghanistan for international terrorism.

In October 2001, the U.S. invaded Afghanistan and declared war on the Taliban for harboring al-Qaeda, the group responsible for 9/11.

In August 2018, retired U.S. Army Col. Chris Kolenda, who helped set up a back channel with the Taliban, told the Daily Beast that the Taliban had expressed a willingness to allow a residual American military force to remain in Afghanistan post a significant withdrawal to “continue training Afghan soldiers — including, hypothetically, ex-Taliban commanders.”

The Afghan Taliban is primarily responsible for the vast majority of the 2,278 U.S. military deaths and 20,134 injuries.

Ultimately admitting that a military win is unattainable, the Trump administration has described the “political reconciliation” between Kabul and the Taliban as a “victory” for the United States.

In its assessment, the Pentagon noted:

The United States has a single vital national interest in Afghanistan: to prevent it from becoming a safe-haven from which terrorist groups can plan and execute attacks against the U.S. homeland, U.S. citizens, and our interests and allies abroad. Our ultimate goal in Afghanistan is a negotiated political settlement between the Afghan government and the Taliban.

Trump administration officials have come out in support of Kabul’s olive branch offer to the Taliban of a ceasefire and recognition as a legitimate political organization, a move that would effectively grant the terrorist group an opportunity to return to power in Kabul.

On Wednesday, the Taliban reportedly said it does intend to rule Afghanistan alone, noting that they are hoping to coexist with other Afghan institutions.

Via Twitter on Wednesday, President Trump said negotiations with the Taliban “are proceeding well in Afghanistan after [nearly] 18 years of fighting.”

Former U.S. Ambassador to Kabul Ryan Crocker blasted the framework deal with the Taliban as a “surrender.”

It remains unclear whether or not the U.S. will push the Afghan Taliban to stop cultivating and trafficking opium and heroin as part of the peace negotiations. Some Afghan heroin is fueling the unprecedented lethal drug overdose epidemic in the United States, deemed a national security threat this week by the American intelligence community.

The Taliban generates most of its funding from opium and heroin.

According to a U.S. watchdog agency, Afghan terrorist groups, mainly the Taliban, control or contest more than 45 percent of Afghanistan.